Virtual dialogue on inclusive mediation: “Game-change does not happen overnight”

UN Department of Political and Peacebuilding Affairs (UNDPPA), CMI and Peace Research Institute Oslo (PRIO) held a virtual dialogue on inclusive mediation, in partnership with the Ministries for Foreign Affairs of Finland and Norway on October 15. Speakers shared their experiences and lessons learned in implementing the Women, Peace and Security agenda, and reflected on the needs and opportunities for inclusive mediation in the future.

What strategies and models can be applied to increase inclusivity in the different aspects of peace processes? How can the resistance to women’s inclusion best be addressed? Twenty years after the adoption of UN Security Council resolution 1325 on Women, Peace and Security (WPS), these are still burning issues.

UNDPPA, CMI and PRIO, with the support of the Finnish and Norwegian foreign ministries have been holding high-level seminars for mediation actors since 2013, to boost the fulfilment of the WPS commitments at international, regional and national levels.

The seminars offer practical strategies and tools for more inclusive design of mediation processes, and to promote women’s effective participation and ideas for gender-relevant provisions for key thematic areas in peace agreements. The seminars have reached over 250 senior mediation practitioners and established their role as a key forum for promoting inclusive mediation.

This year, due to the coronavirus pandemic, the seminar held was a virtual dialogue, and the theme was “Imagining Inclusive Mediation: Learning from pioneering and young women leaders”. It marked the 20th anniversary of the WPS resolution, and included first-hand experiences on how the WPS agenda has been put into practice in the different phases of peace processes, as well as ideas for how these efforts could be strengthened moving forward.

Rosemary A. DiCarlo, the Under-Secretary-General for Political and Peacebuilding Affairs, stressed in her opening remarks how “power politics, entrenched patriarchal attitudes and unequal social structures continue to impede women’s participation in peace processes”. 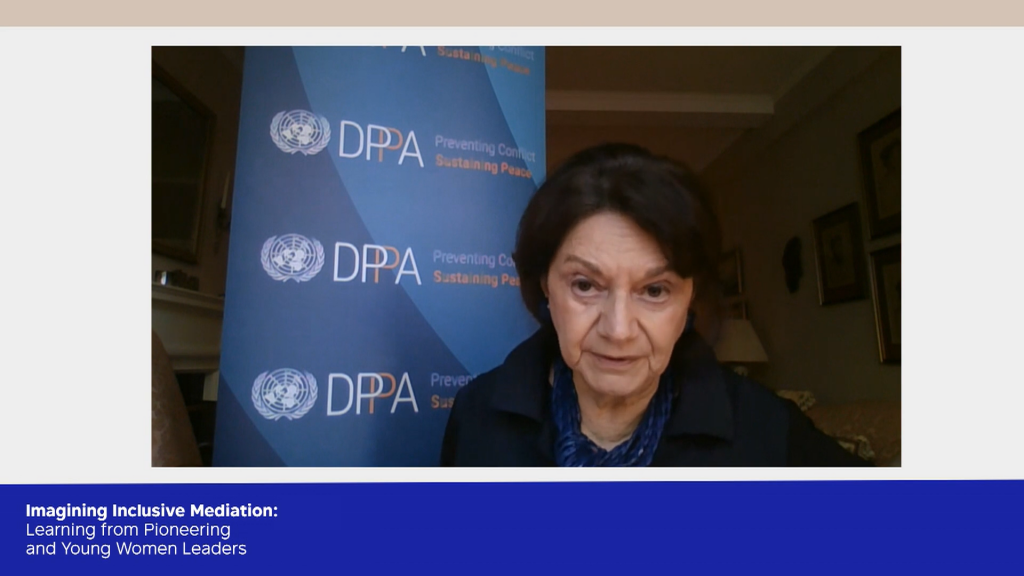 Rosemary A. DiCarlo, the Under-Secretary-General for Political and Peacebuilding Affairs gave opening remarks of the event.

How to lay the ground for inclusive peace processes?

CMI’s Director for Global Strategy Itonde Kakoma moderated the virtual dialogue among the high-level panelists. He kicked off the discussion by asking the panelists “what does an inclusive peace process mean to you?”.

“An inclusive peace starts with having everyone impacted by the peace deal represented while making the agreement”, said Emmily Koiti, medic, human rights activist, youth representative and signatory in the South Sudan peace process.

Hajer Sharief, Libyan human rights advocate and the co-founder of “Together we build it”, pointed out that before starting any peace process it is important to first identify “whose peace are we talking about?”. Only then can the real process start.

Bringing women and other marginalised groups to the table is not enough, if they are not considered as real actors in the peace process. Throughout the discussion Hanna Tetteh highlighted the need to avoid tokenism. Hanna Tetteh is a Special Representative of the UN Secretary-General to the African Union, Head of the United Nations Office to the African Union and Co-Facilitator in the High-Level Forum for the Revitalisation of the Agreement for the resolution of the conflict in South Sudan (2017-2018). “You have to see women as people who truly have something to contribute to the process”, she said.

Miriam Coronel-Ferrer reminded the audience, that game-change doesn’t happen overnight, and it requires structural changes and new thinking in the society.

“For us, it was very important to shift the concept of security from traditional security to human security, because then it became important to bring in also other actors, like civil society and women”, she said of the peace process in the Philippines. Miriam Coronel-Ferrer is a Senior Mediation Advisor at the UN Standby Team, who was a member of the Government Negotiating Panel for Talks with the Moro Islamic Liberation Front (2010-2016), of which Government Chief Negotiator (November 2012-June 2016).

All the panelists agreed that there is still far to go to make inclusive mediation truly a reality. “It requires constant deliberate effort to construct gender-balanced peace processes”, summarised Hanna Tetteh.