Martti Ahtisaari, founder of CMI, President and Nobel Laureate, has a career in conflict resolution spanning 40 years. The following are Ahtisaari’s inspirational lessons for peace negotiators. 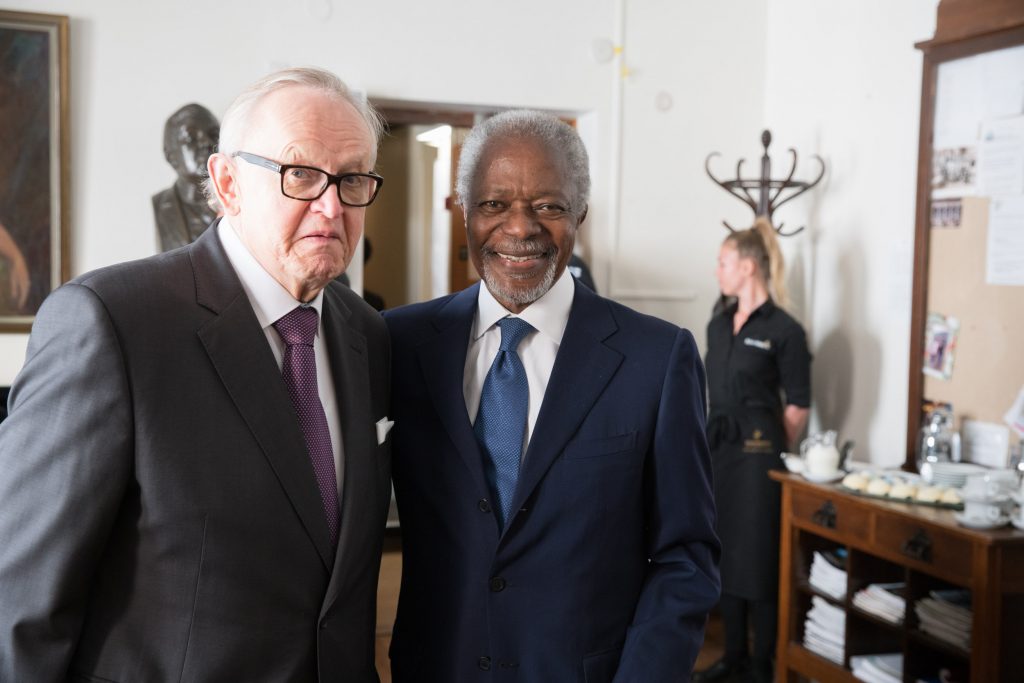 Martti Ahtisaari is known for not making distinctions between people. For him, everyone is on an equal footing. The most important thing is to try to listen to others and to put yourself into their shoes. Ahtisaari’s respect for everyone reflects the Nordic values ​​that he holds dear, such as equality and justice.

“I have sometimes been criticised for treating evil-doers with respect”, Ahtisaari recalls.

This happened, for instance, during the Kosovo peace talks in 1999. Ahtisaari’s colleagues wondered at his courteous treatment of Yugoslav President Slobodan Milošević. It was Serbian forces that had attacked Kosovo on Milosevic’s orders.

“My reply to my colleagues was: Milosevic is the president. He must be treated with dignity in order for a solution to come about.”

All of Ahtisaari’s efforts to bring about peace are characterised by the way he always set a clear objective from the outset. Following from that, it is the job of the mediator to get parties to a conflict to navigate towards that goal.

Ahtisaari also often stresses his role as an “honest broker”.  The parties to a conflict need to know what they can achieve and what they will have to sacrifice.

A good example is the Aceh peace process. 15 years ago the Free Aceh Movement (GAM) in Indonesia wanted independence for Aceh province, but Ahtisaari viewed this goal to be utopian. At the negotiations, only autonomy for the region was on offer. The GAM representatives were taken aback by Ahtisaari’s plain speaking. But just hours before the deadline set by Ahtisaari they announced that they would take part in the negotiations.

You can’t do it alone

A peace mediator is only as strong as his or her team. Ahtisaari often points out that he has always been privileged to work with skillful people. He turns to such colleagues over and over again.

“If you imagine you know how to do everything yourself, it’s best to go in for something else,” comments Ahtisaari.

Building trust in relationships is not just about one’s co-workers. The peace of any country does not take place in a vacuum, but requires broad support for it to be realised. Winning the trust of big powers also has a key role to play. Ahtisaari says that he first learned this during Namibia’s more than a decade-long peace process.