One year into the office, how has Ukraine’s new president succeeded in his job?

It has been one year since Volodymyr Zelenskiy was sworn in as Ukraine’s new president. Zelenskiy promised to bring real change by conducting vital reforms and ending the conflict in eastern Ukraine. How has he performed? What sort of challenges has he faced? What are future prospects? These were the topics of discussion at a webinar that CMI organized in cooperation with the European Policy Center (EPC) on 20 May 2020. 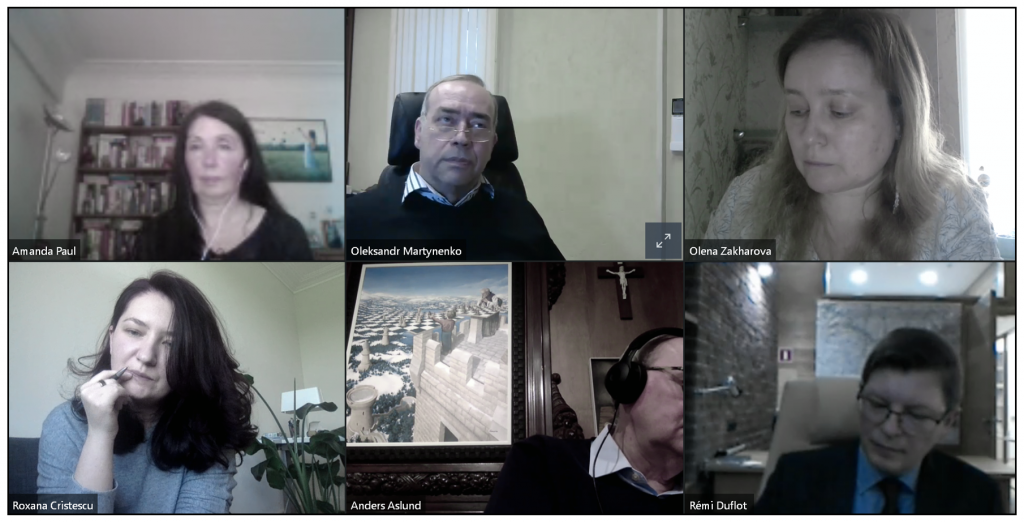 CMI organized the webinar in cooperation with the European Policy Center (EPC).

On May 2019, Volodymyr Zelenskiy was sworn in as Ukraine’s president following a sweeping victory at the elections. During the campaign, Zelenskiy promised to bring real change to the country. Among these changes was ending the conflict in eastern Ukraine.

One year into the job, how has Zelenskiy performed?

“Zelenskyi has tried to build the image of a peacebuilder. He sees that there is not going to be a military solution to the conflict. He is trying to find ways to make his vision work, but so far there are no successes or failures. However, we can see some positive steps in the right direction,” says Olena Zakharova, Co-founder and President of the Centre of Public Initiatives «Ideas for Change», who was one of the speakers in the webinar.

Zelenskiy has made efforts towards the conflict settlement process. This includes exchange of prisoners and detainees which was conducted under the leadership of Head of President’s Office Andriy Yermak. For the first time in three years, the Normandy Four talks involving Ukraine, Russia, France and Germany were resumed in December 2019 at head of state level.

However, the negotiation process proved to be challenging. “Since the beginning of May, the situation is not good on the ground. The only thing we can do is to talk and try to bring everybody to the table to decrease the tensions. At least, there is still the possibility of dialogue. What can bring about a change is the political will of the sides,” said Rémi Duflot, Deputy Head at the Office of the Special Representative of the OSCE Chairperson-in-Office in Ukraine and in the Trilateral Contact Group.

Oleksandr Martynenko, Director General and Founder of the Interfax-Ukraine News Agency, pointed out that Zelenskyi has underestimated “the importance of the geopolitical factor” in the conflict. “Russia is not ready to leave Donbas,” Martynenko said.

As the moderator of discussion, CMI’s Director of EU Affairs, Head of Eurasia Programme Roxana Cristescu reflected on Zelensky’s original plan to make significant progress in the peace negotiations within 12 months, and the open question regarding what might be his Plan B and when such an alternative approach may be assessed as necessary.

In terms of reforms delivery  Zelenskiy’s first year offers a mixed picture. According to Anders Aslund, a Senior Fellow at the Atlantic Council, the main achievement of current government is the adoption of the Banking Law that enabled Ukraine to conclude a standby agreement with the IMF. Among other achievements discussed by the webinar participants were the land market reform, digitalisation of government, as well as the ability to maintain good macroeconomic stability. In this context, CMI’s Roxana Cristescu emphasised that “it would be great if the EU would continue supporting Ukraine’s reforms efforts and I think the EU has done a great job so far, especially with the Support Group for Ukraine”.

During the questions and answers session CMI’s Senior Advisor Denis Matveev asked speakers about their assessment of the effectiveness of the whole Zelensky-led executive in managing the Coronavirus situation. As such, the government’s measures against the virus were praised by Anders Aslund. Nevertheless, there is a difficult road ahead and help is urgently needed as the country’s already vulnerable economy will be hit by the Covid-19 crisis.

Since 2014, CMI has actively worked in support of a peaceful settlement of the conflict in and around Ukraine. We have contributed in strengthening capacities of Ukrainian actors for effective engagement in the peace process. CMI has also supported a major nationally-led initiative – National Platform “Dialogue on Peace and Secure Reintegration” which fosters solutions for the complex Donbas settlement process and enables progress towards sustainable peace in the country. The initiative is funded by the European Union in the framework of project “Building Resilience to Conflict Through Dialogue”.