CMI and Masarat’s challenge contest inspired Palestinian youth to come up with innovative ideas to strengthen women’s role in peacemaking. The first prize was shared between two teams that strive to increase women’s political participation in public spaces of a refugee camp, and at university councils, respectively. “Participating in the Innovation Challenge increased our determination to work towards our goals”, said one of the team leaders Bisan Jaffari. 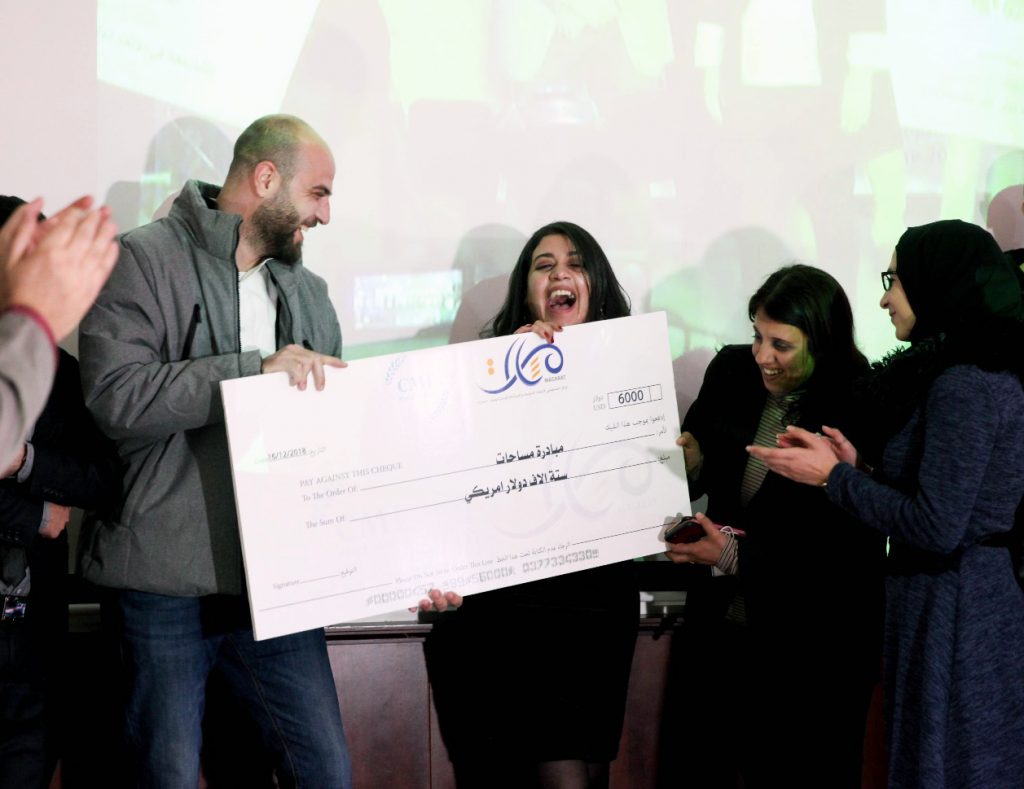 Shadi Hadneh, Bisan Jaffari and Riham Jaffari were part of the winning team in the West Bank. The ”Public Space Initiative” challenges the gender stereotypes that alienate women from public spaces.

Challenge contests are used as a tool to drive innovation and accelerate social change in the world. They can be used for developing new ideas to tackle complex, persisting social problems. In Palestine, CMI and its long-term partner organization Masarat identified an opportunity to strengthen inclusive peacemaking through the challenge contest approach.

Our aim with the Peace Innovation Challenge Palestine was to encourage and inspire people to develop new approaches for strengthening women’s contribution to peace and security. We were looking for locally-driven, concrete ideas that could create new ways to break the barriers of participation and inspire others along the way.

The challenge call created wide-spread interest in Palestine and among the diaspora. Ten talented teams, representing different Palestinian communities, were chosen to the incubation phase. For two months, national and international mentors provided mentorship and co-creation support to the teams for developing their ideas and initiatives further.

Due to the blockade of Gaza and restricted movement in the occupied Palestinian territories, virtual technologies were vital in enabling contact and co-operation between the teams. This turned out to be a unique experience for all, as a strong sense of unity developed among the participants. “For once we felt like there are no borders between us”, said Ashira Ramadan, one of the participants from the West Bank. 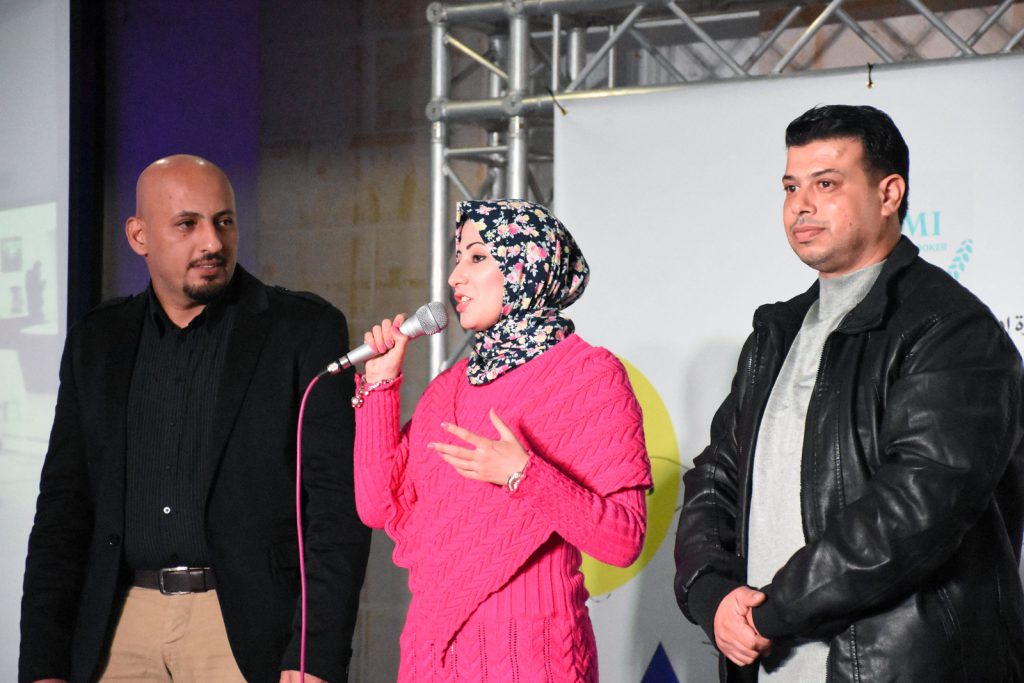 “Whichever team wins, it will be good for Palestine”

Following the incubation phase, the teams pitched their ideas publicly in the final events held in Ramallah and Gaza simultaneously. The most potential teams were also awarded by an independent jury. The first prize was shared between two teams, one in the West Bank and one in the Gaza Strip. In the West Bank, the awarded team’s goal is to enhance women’s participation through a ”Public Space Initiative”. The team aims to challenge the gender stereotypes that alienate women from public spaces and derive them of opportunities for social and political participation in the conservative Al Aroob refugee camp.

Before the awards were announced, the “Public Spaces” team leader Ms. Bisan Jaffari reflected the value of the co-creation process. ”At the beginning of the Innovation Challenge, we felt like the teams were competing against each other. After we got to know each other during the incubation phase, I feel that whichever team wins, it will be good for Palestine.”

After learning that her team’s initiative was awarded, Bisan was overjoyed: “We came to this competition carrying with us the dreams of Al Arroub camp’s women. Participating in the Innovation Challenge Contest has increased our determination to work towards our goals and for the benefit of our community.”

The first award was shared by an initiative called ”New Women” from the Gaza Strip. Their aim is to address the low representation of women in the university student councils. The team leader Yehya Qaoud underscored the political significance of their initiative: “The student movement has always been the backbone of the national movement in Palestine. Most of the founders of our political parties have first been leaders in the student movements. Today, however, emerging young leaders face multiple obstacles. To change this, we need to ensure equal representation of both men and women at these councils, and we can do this through carefully crafted outreach and capacity-building support.”

In the final event, CMI’s Board Member Aleksi Neuvonen highlighted how the innovation challenge was much more than a quest for the award:  “The teams developed inspiring initiatives and networks that span across borders, thereby breaking the barriers that have been built between them”. 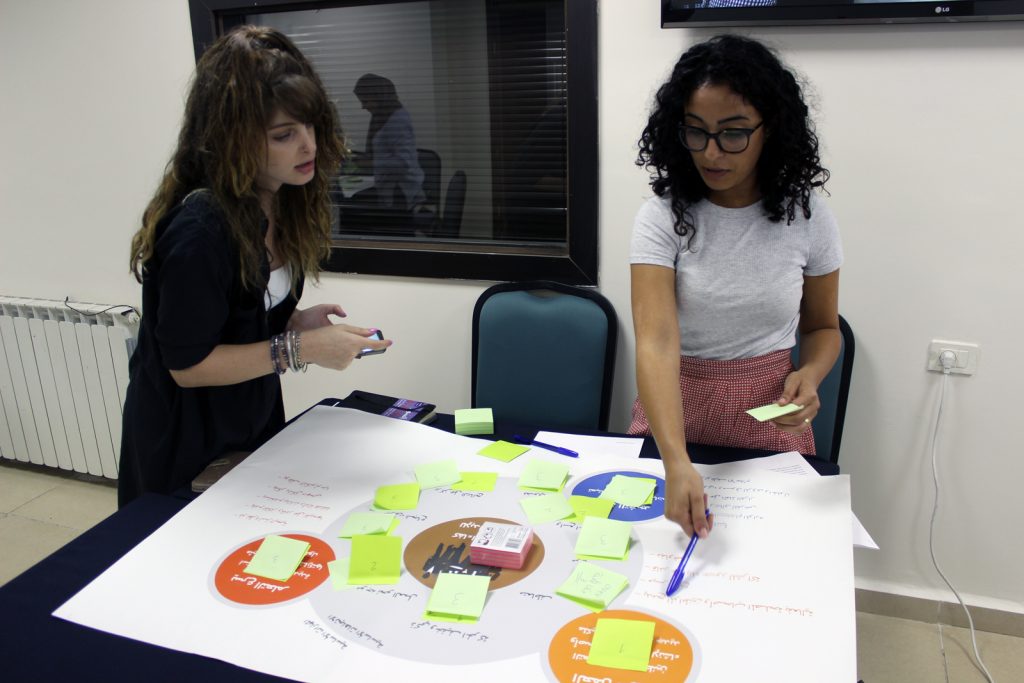 Jewan Beshareh (left) and Ayeh Zeenati from the team “Meeting Point” planned their project in the incubator in the West Bank.