Quintin Oliver led the successful Yes Campaign that resulted in acceptance by referendum of the Northern Ireland peace agreement 20 years ago. Oliver spoke about his experience of the campaign at a forum held to discuss how communications could help promote the reintegration of Ukraine. 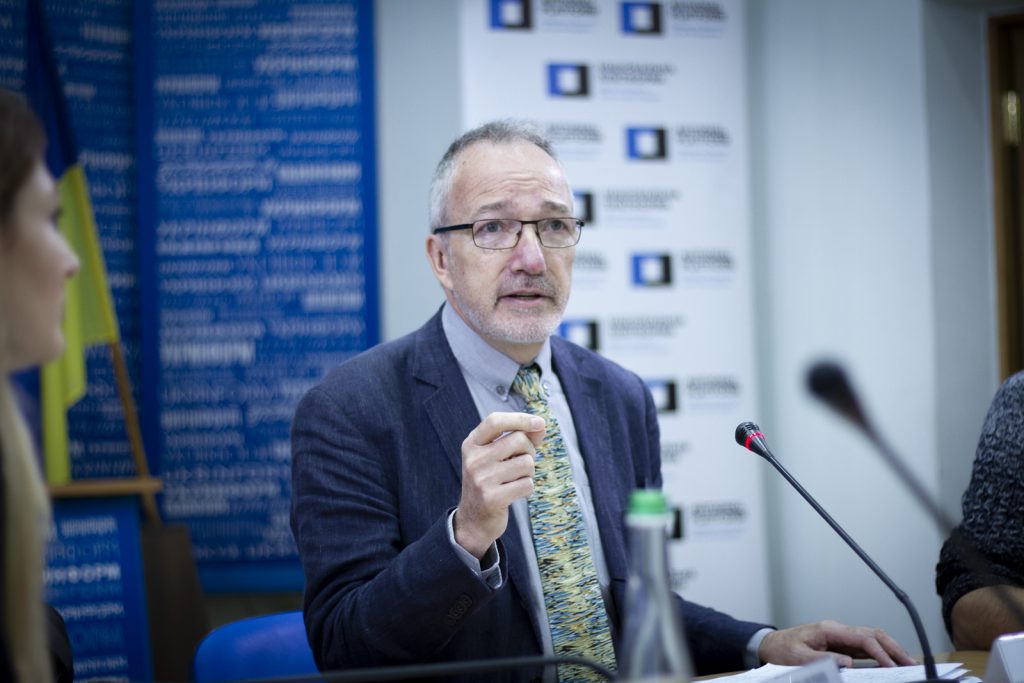 Quintin Oliver said that a key element in the Yes Campaign was to translate the Northern Ireland Peace Agreement into the language of ordinary people.

Quintin Oliver’s starting point didn’t amount to much when he started campaigning for the Northern Ireland Peace Agreement at the end of the 1990s.

“I had no supporters or money. I had to use my 2 and 5 year-old children’s savings. But I set to work because I knew that the right moment had come. The prospective rewards were so great that they outweighed the risks.”

Oliver led the successful Yes Campaign that resulted in acceptance by referendum of the Northern Ireland peace agreement in 1998. The peace accord brought an end to the violence that had gone on for 30 years. This spring marked the 20th anniversary of the peace agreement.

Oliver spoke about the importance of communications in peace building in a discussion forum held in the Ukrainian capital of Kyiv at the end of September.

The forum was part of the National Platform series of regular dialogues aimed at finding ways of reuniting the war-torn country. The National Platform brings together Ukrainian central and local executive authorities, Members of Parliament, representatives of local communities and regions, public organizations and international experts, diplomatic organizations and missions to discuss issues of special relevance. Experts from abroad bring international experiences of peace building to the debates. CMI is one of the organisers of the monthly forums.

The Platform has received wide coverage in the Ukrainian media. This type of non-partisan and inclusive dialogue platforms are rare in Ukraine. 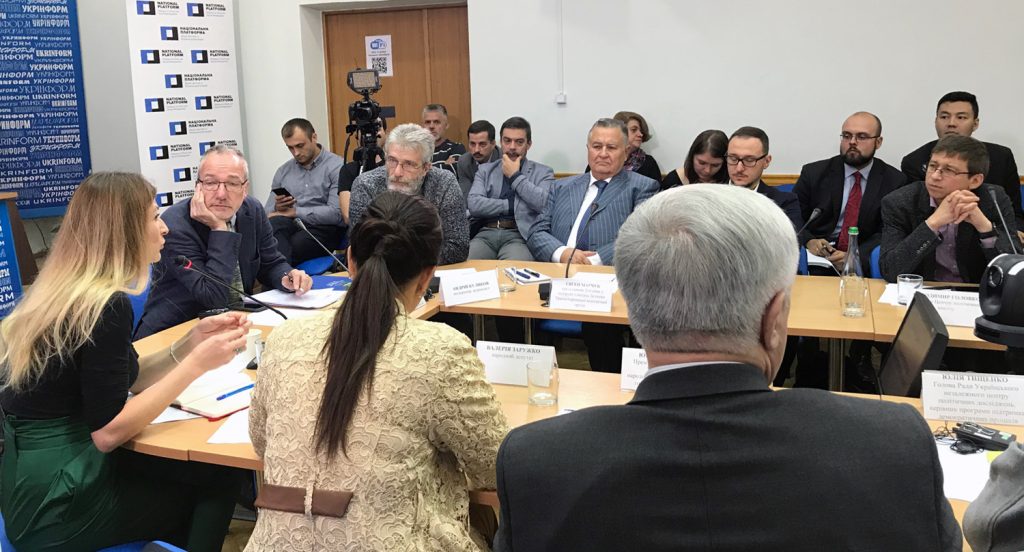 The country’s First Deputy Minister of Information Policy Emine Dzhaparova (left) emphasised that the main goal of the government’s new strategy is to bring areas not controlled by the government within the same information orbit as the rest of Ukraine.

Communications played a central role in the Yes Campaign in Northern Ireland in winning people behind the peace agreement. The basis for the campaign was not easy. Many voters were suspicious of politicians, who in their experience talked a lot but did little. The toxic atmosphere of violence and sectarianism stultified debate and inter-communal dialogue.

Oliver explained that a key element in the campaign was to translate the peace agreement into the language of ordinary people, so that they would know how it would benefit them. He points out that the peace agreement was a 15 000-word legal document drawn up by politicians, lawyers and civil servants.

“Clearly, ordinary people didn’t understand its content. So our job in the Yes Campaign was to reduce it to ideas and symbols.”

For the campaign symbol they chose a one-way road sign with the arrow pointing forward. They also had to show what would happen if people voted ‘No’. This was represented by a dead end road sign.

“So with communications it was not about having two men in suits saying ‘this is a good thing, you must vote for it’. That would not work.” 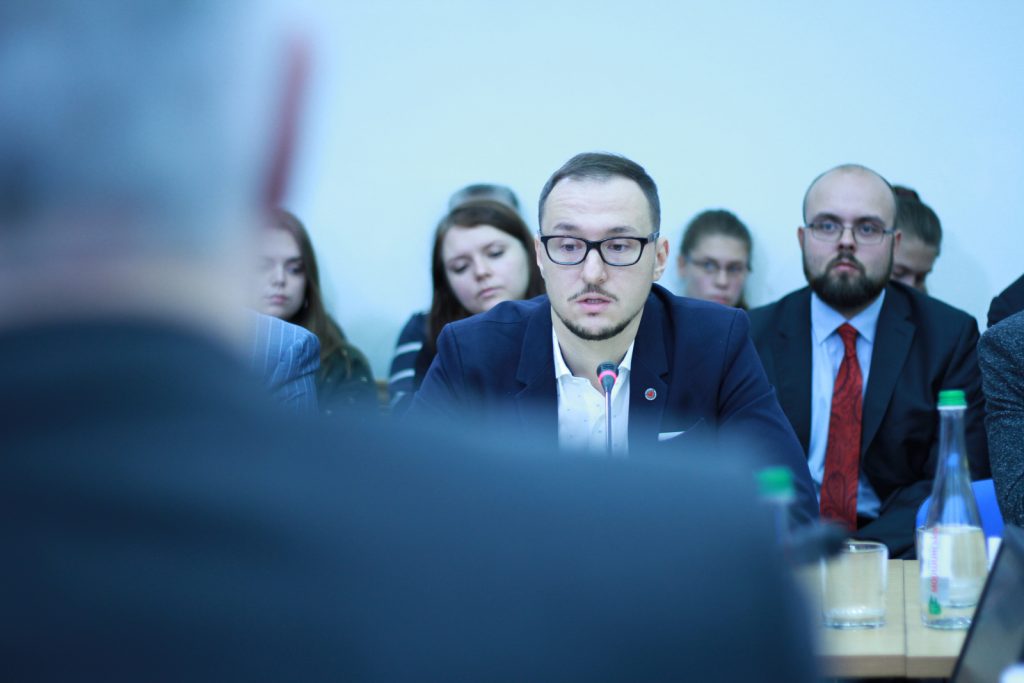 Opposition MP Oleksiy Ryabchyn said that the government’s message of a better future would not be credible if the roads are in a bad condition in government-controlled areas.

It all starts with clarifying the goal

Oliver is a veteran campaigner and communications professional. He presented the forum with 10 concrete ideas for effective communications, and highlighted three core issues.

First, everything starts with clarifying the goal of the message.

“Bothering with this may sound simplistic, but I at least all too often come across communications where I can’t work out what it is trying to ask you to do.”

Second, he stressed, good communications is based on factual information. What is the public mood in light of different sorts of evidence? Communications is too dependent on convictions. For instance, said Oliver, with campaigns such as referendums, it is customary to try to reach voters whom the campaigners know – but not the ones they don’t know – who are decisive in terms of the outcome of the vote.

Third, Oliver said that it is important to consider what kind of vision of the future your communications presents.

“It’s easy to say that we want a better future. But what will this future be built on?”

Oliver said that it’s important to look to the future in order to change the mindset of people living in the midst of conflict.

“We need to talk about the future instead of the past. It’s too easy to wallow in the past because conflicts always cause pain and destruction. ”

Between these two extremes there was a large group of people who were not as divided. Most of them wanted more than anything to have a better future for themselves and their children. Which is why ordinary people had such an important role in the Yes Campaign.

Women were a crucially cohesive force in their communities.

“Women played a critical role in the Northern Ireland peace process. And this must be so in other conflicts”, said Oliver. 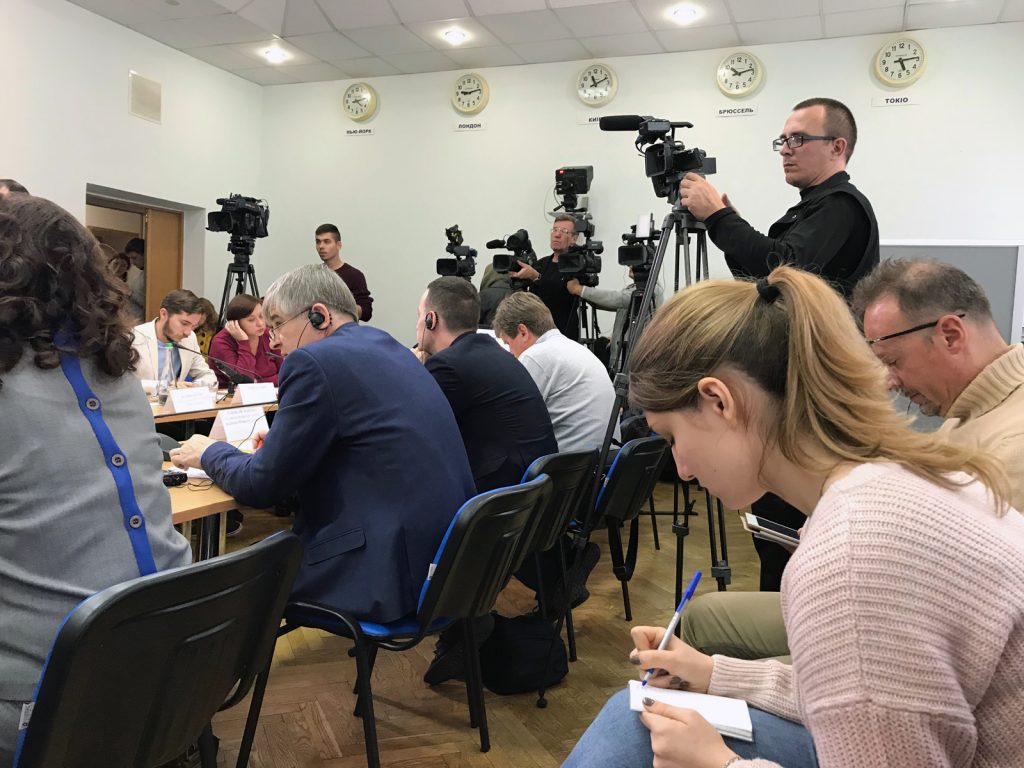 The Platform has received wide coverage in the Ukrainian media.

Expert: Personal communications must have a key role

Oliver’s presentation at the forum sparked a lively debate on how communications could best assist the reunification of Ukraine.

The country’s First Deputy Minister of Information Policy Emine Dzhaparova emphasised that the main goal of the government’s new strategy is to bring areas not controlled by the government within the same information orbit as the rest of Ukraine. Improving access to Ukrainian national TV channels in the Donetsk and Luhansk regions is a main instrument for this. The strategy also involves creating a system of producing and distributing tailored content for Ukrainians living in the area.

Dzhaparova said that the inhabitants of these regions received most of their information from local media under Russian influence. She said this was typified by negative news coverage of Ukrainian politics. Diana Dutsyk, who heads the Ukrainian Institute of Media and Communication, called on the government to promote the status of independent media in the region.

Many speakers emphasised the importance of communications in winning over people’s trust. Opposition MP Oleksiy Ryabchyn said that the government’s message of a better future would not be credible if the roads are in a bad condition in government-controlled areas.

Dutsyk, who said she had been going around the Donbas area a lot lately, stressed that rather than having top-down communications, there should be a focus on personal communications. One of the reasons for this is that the inhabitants of the Donbas do not trust politics or politicians.