The National Dialogues Conference held in Helsinki highlighted the deadlock at the UN Security Council. 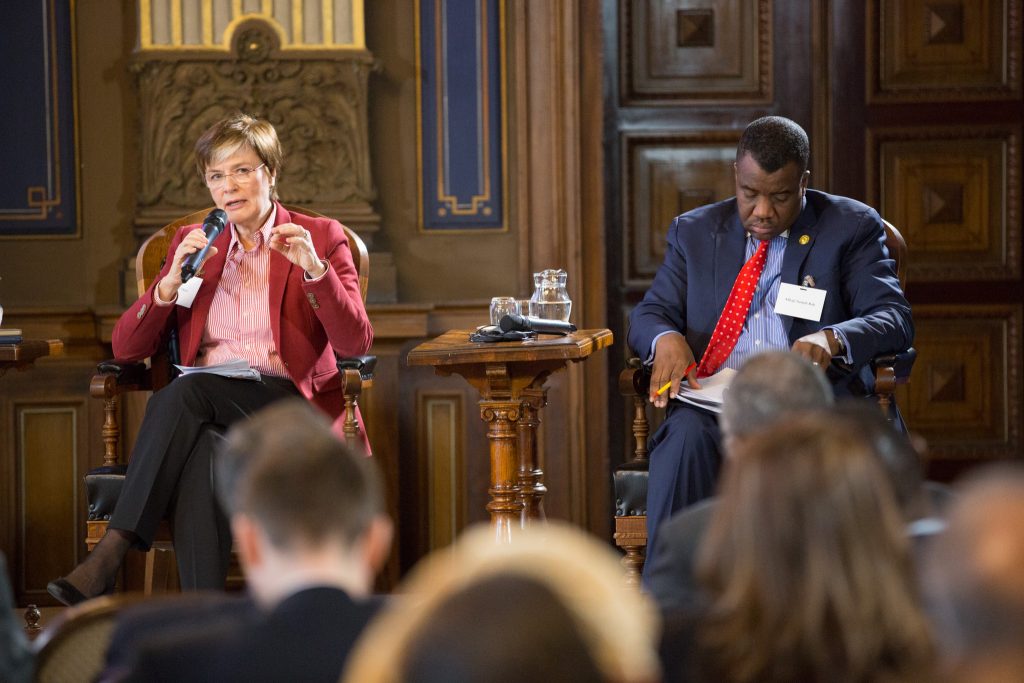 Astrid Thors, Former High Commissioner on National Minorities at the OSCE, participated in the panel with doctor Alhaji Sarhoj Bah, the Head of Division for Crisis Management, Post-Conflict and Reconstruction at the AU Peace and Security Department. Photo: Riku Isohella

High-level experts in conflict prevention and resolution consider lack of political leadership and will as the main causes of the unstable world situation.

The experts spoke at the National Dialogues Conference in Helsinki. The conference, hosted by the Ministry for Foreign Affairs of Finland, aimed to strengthen the prospects for peace.

As the news of the poison gas attack in Syria broke, the high-level panel couldn’t have been timelier. Russia faced criticism from other world powers as the country threatened to block collective action against the Syrian regime in the UN Security Council.

The conference took place before this week’s US unilateral strike against Syria.

The experts saw the ongoing war in Syria as the clearest example of lack of political leadership and will in the world. Much of the inaction is due to the power of the United Nations Security Council permanent members to veto any substantive decisions.

“The biggest failure we’re facing now in the UN system is the inability of the Security Council. The Security Council has been in deadlock with different conflicts. We have to deal with this problem”, said Ambassador Hesham Youssef, Assistant Secretary General for Humanitarian Affairs at the Organisation of Islamic Cooperation.

The Ukraine crisis could also have been prevented through effective international leadership, said Vadym Chernysh, the country’s Minister for Temporarily Occupied Territories and Internally Displaced Persons.

“We can’t do a lot, because the international system doesn’t work”, said Chenysh.

The resolution of the crisis in Gambia was a success

Doctor Alhaji Sarhoj Bah from the African Union (AU) cited Libya as a warning example of what happens when international leadership is lacking. NATO pushed for regime change by military means, “and then walked away from the crime scene,” Bah said.

The AU warned the western powers of the consequences of the military intervention, but its views were sidelined.

“Libya is now a failed state, due to the failure of leadership”, said Bah, who serves as the Head of Division for Crisis Management, Post-Conflict and Reconstruction at the African Union Peace and Security Department.

Bah reminded the audience that the AU, together with the regional organisations, has built a fairly robust mechanism for upholding peace and security on the continent. The purpose of the African Peace and Security Architecture is to prevent, manage, and resolve conflicts. CMI works closely with the AU and regional organisations to support the architecture.

Bah highlighted the recent resolution of electoral crisis in Gambia as an example of the effective functioning of the architecture. Gambia was thrown into chaos when the autocratic president, Yahia Jammeh, refused to step down. After weeks of uncertainty, the Economic Community of West African States (ECOWAS) managed to convince Jammeh to give up power.

“There was political will and leadership in Gambia. Otherwise the situation could have been much, much worse”, said Youssef.

The Ministry for Foreign Affairs organised the conference in cooperation with CMI, the Finnish Evangelical Lutheran Mission (FELM), Finn Church Aid, and the Common Space Initiative.