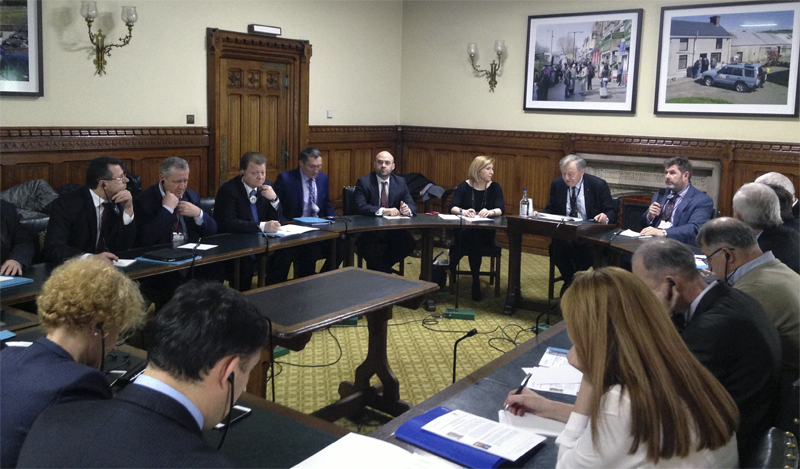 Meeting with the Lord Dubs of House of Lords in Westminster, London to learn about approaches and policies the central authority takes in relation to devolved areas.

On March 15-19 2016, delegation from Moldova that includes Members of Parliament of the Republic of Moldova and Gagauzia People’s Assembly visited Wales, the devolved area of the United Kingdom, to study that model of devolution and learn about mechanisms governing relationships between the central and local authorities. The participants are the members of the informal and official workings groups working on improving functioning of Gagauzia’s autonomy. The study visit was organised within the framework of the project Supporting the efficient exercise of Gagauzia’s autonomous powers within Moldova’s constitutional frameworkwhich is beingimplemented by CMI with the financial support of the Ministry of Foreign Affairs of Sweden.

During the visit, the delegation held meetings in London, visiting Westminster to learn about approaches and policies the central authority takes in relation to devolved areas and the role of parliaments, such as the Welsh Affairs Committee in the House of Commons. The group then travelled to Cardiff to meet with the representatives, National Assembly for Wales, Wales Government, Wales Office in Cardiff, and also with representatives of the expert community from Cardiff University.

The visit provided opportunity for the group to learn about the principles of decentralization mechanisms, reallocation policies for State and local funds, and distribution of competences and powers. Issues highlighted included the division of competences that rest with Wales, such as education, health, and local governance, and policy areas that remain full under London’s control, including foreign and defence policy. The group was impressed by the attention paid by Wales to the promotion of Welsh language. As part of CMI’s methodology, the meetings with interlocutors were combined with internal dialogue sessions between group members. The sessions focused on lessons to be learned from the model and mechanism of devolution, and implications for the group’s ongoing work on Gagauzia.

Previously, the representatives of the Moldovan Parliament and Gagauzia People’s Assembly visited South Tyrol (Italy), where they learned about autonomous relations with the central authorities and the functioning of dispute settlement mechanisms. In May 2016 the group will have the opportunity to visit the Åland Islands in Finland to study that model of devolved authority. The project includes multiple study visits for the working group to jointly learn about different devolution models.

The delegation from Moldova including Members of Parliament of the Republic of Moldova and Gagauzia People’s Assembly in front of the Welsh National Assembly in Cardiff.

Gagauz-Yeri autonomy was established in the south of Moldova in the early 1990s amidst widespread regional turmoil. The aim of founding the autonomy was to enhance cultural, linguistic and local governmental rights of the Gagauz minority. However, the functioning of Gagauzia’s autonomy and the exercise of its competences over the last two decades has faced challenges in the legislation that clearly delineates its competences and their implementation.