A peace deal mediated by CMI and president Ahtisaari paved the way for stability in the conflict-torn province in Indonesia.

Ten years ago, the parties of the peace negotiations for Aceh, shook hands in Helsinki to sign off the deal negotiated in Finland in less than eight months. The agreement, mediated by President Martti Ahtisaari and CMI, was a result of will and determination of the parties, the Government of Indonesia and the Free Aceh Movement (GAM) to stop an almost three-decade long conflict and to give the province of Aceh an autonomous status within the country. It was also a commendable decision to rebuild and bring new hope for the province after a devastating tsunami where 130 000 Acehnese had lost their lives. 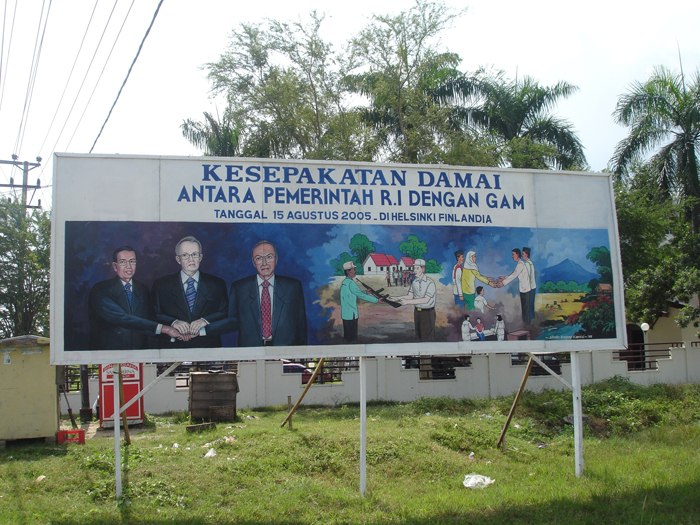 The peace agreement was visible on the streets of Aceh.

The negotiations in Helsinki were not an easy process for either side, but the parties remained committed to peace. A lot of trust and confidence were needed at the time to reach the agreement. In the following decade, the world has witnessed Aceh’s impressive reconstruction and development. Peace in Aceh has stood the test of time and trepidation, and has acted as encouragement and model for others. 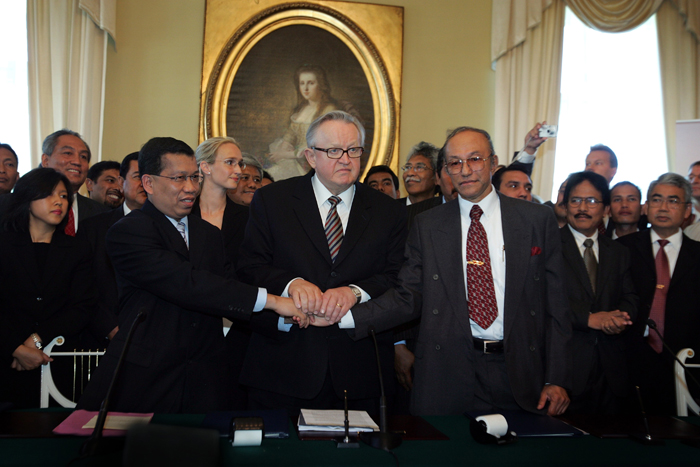 The peace accord was signed by the Minister of Justice of the Government of Indonesia Hamid Awalud and the leader of the delegation of the Free Aceh movement Malik Mahmud and was witnessed by CMI’s chairman of the board President Martti Ahtisaari.

“Acehnese are better placed than most to appreciate that fact that peace is a prerequisite for development and prosperity in any society.”

The trust and confidence expressed by the parties at the time are equally important for the current and future efforts in building a fair and democratic society in Aceh. Having witnessed the many decades of conflict, the Acehnese are better placed than most to appreciate that fact that peace is a prerequisite for development and prosperity in any society. However, it may be easy to lose sight of the fact that peace is not a one-time event, or a quick-fix, but a long-term process and a continuous responsibility. It needs to involve the whole society and to be cautiously and determinately nurtured over decades to cement its grounds.

On this 10th anniversary of peace, CMI congratulates the province of Aceh and the Government of Indonesia for the remarkable achievement.