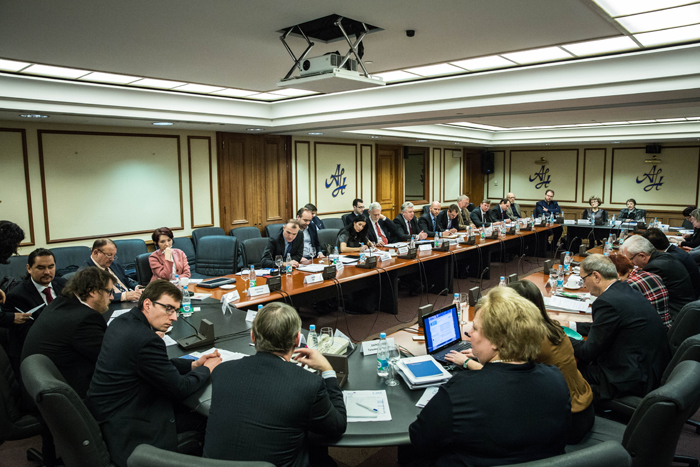 CMI organised a round table event in cooperation with the Russian International Affairs Council (RIAC) on 4 December in Moscow to discuss ways forward for the Transdniestrian settlement in the context of the downturn in Russia-EU relations.

The event was opened by the RIAC Programme Director Dr. Ivan Timofeev and CMI’s Programme Director Dr. Ville Brummer. After this, presentations were made by Dr. Dmitry Danilov, Head of the Department of European Security at the Institute of Europe and Vice President of AES; Dr. Tatiana Lariushin, Senior Economist at the Institute for Development and Social Initiatives (IDIS Viitorul) and Former Economic Adviser to the President of the Republic of Moldova (1997-2001), Dr. Iurie Ganin, Vice President for the Chamber of Commerce and Industry of Transdniestria; and Dr. Nicu Popescu, Senior analyst at the European Union Institute for Security Studies (EUISS).

The presentations were followed by a lively discussion with the participants, including Sergey Kulik, Director of International Development at the “Institute of Contemporary Development” Fund; Vladimir Olenchenko, Senior Research Fellow at the Department of Research of the European Union (IMEMO, RAS); Alla Yazkova, Head of the Mediterranean and Black Sea Department at the Institute of Europe of the RAS; Iuri Cheban, Vice President of the Union of Industrialists, Agrarians and Entrepreneurs of Transdniestria; Corneliu Ciurea, Head of Democratisation & Competitive Society Department at the Institute for Development and Social Initiatives (IDIS Viitorul) in Chisinau; and Galina Selari, Director for the Center for Strategic Studies and Reforms (CISR) in Chisinau and others.

This event took place as part of a consultation visit to Moscow of CMI’s high-level expert dialogue group on the Transdniestrian settlement, during which bilateral meetings were also held with representatives of the think tank community and the political establishment.

CMI’s contribution to the round table event was funded by the German Federal Foreign Office through project Zivik of the Institute for Foreign Relations (ifa) and by the Ministry for Foreign Affairs of Finland.