Sharing learnings and ideas for responding to African crises

Solving the complex conflicts in Africa require a comprehensive approach, CMI’s expert panellists agreed at a seminar convened to discuss the status of peacemaking in African diplomacy. Sharing their experiences from responding to various crises on the continent with a venue full of people, they emphasised the importance of sharing knowledge, gaining regional and historical understanding and ensuring close cooperation among various actors. The seminar, held on 1 September, was organised in cooperation with the Crisis Management Centre Finland, and the Ministries for Foreign and Internal Affairs.

The panellists reflected on a variety of key issues on the continent, including the importance of democratic processes, long-term socio-economic development, cultural and historical aspects as well as regional factors and follow-up mechanisms. They also shared many practical examples from different conflicts such as the Central African Republic, Sudan, South Sudan, Burkina Faso and Mali. The role of Finland and CMI in conflict management and peace mediation was also recognised.

Opening the seminar, Mr Pekka Haavisto, Minister for International Development, stressed that different actors can learn a lot from the capacities of African peace mediators. Referring to ongoing conflicts in countries such as Sudan and Central African Republic, Mr Haavisto also emphasised how important it is to continue to work on so called forgotten conflicts in addition to those that attract news headlines. However, even though many of these conflicts take place in Africa there are many positive news coming from the continent as well.

All organising partners welcomed this initiative to jointly develop the skills and understanding on peace mediation in Africa as a timely and needed effort. Learning from past lessons is essential, said Ms Anne Sipiläinen, Under-Secretary of State at the Ministry for Foreign Affairs, as she highlighted the long-term importance both Finland and the EU have placed on contributing to conflict resolution and sustainable peace through military and civilian crisis management, and development support. 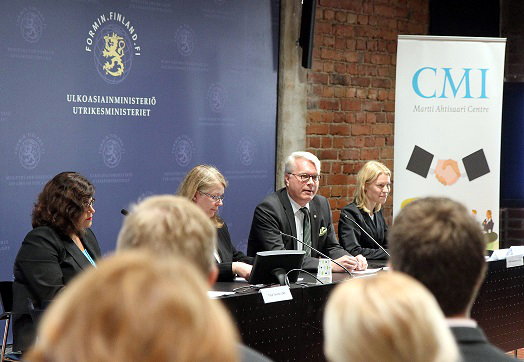 Discussing the reasons for conflicts in Africa, Ambassador Bwakira pointed out that although they tend to be complex, the difficulties often centre around power sharing such as the management of natural resources. Learning to deeply understand and manage the reasons for a conflict is key for resolving it.

“It really is about building trust among key players,” Mr Charpentier emphasised. He highlighted that finding the willingness among conflict parties to compromise is more important than setting up democratic processes. Colonel Faye stressed that in efforts to achieve sustainable peace, it is as important to disarm the people as it is to disarm the mentality of using violence as means to achieve ones goals. Political parties and movements, and their possible transformation into military movements, should be actively monitored.

A comprehensive approach is needed for solving complex conflicts, said Ambassador Satti. Unfortunately, organisations and actors working in conflict countries often only have piecemeal solutions to provide for resolving crisis. 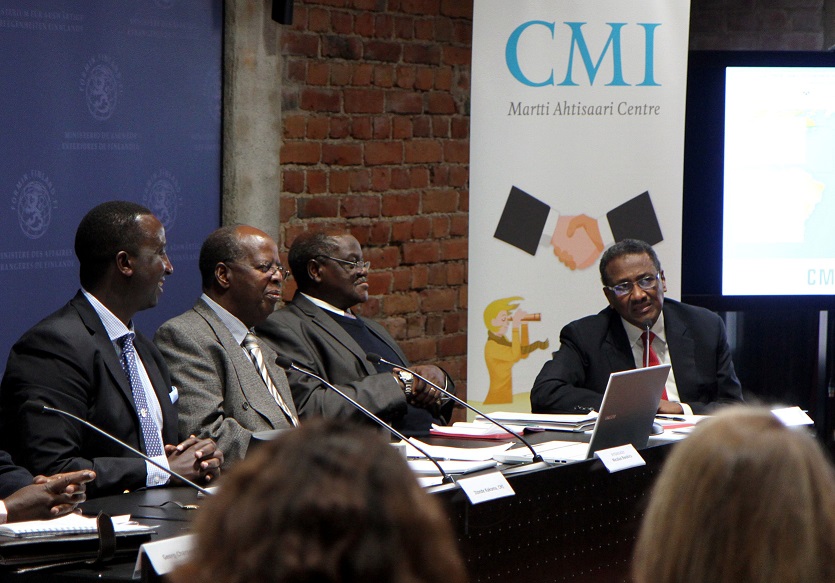 The importance of neutral actors such as CMI is needed, Ambassador Bwakira explained the impact that regional aspects can play resolving conflicts on the continent.

Often there tends to be a lack of trust among neighbouring countries due to historical conflicts or suspicions of hidden interests. This may, as has already happened, negatively impact or decelerate peace building processes. In these cases, an external actor such is often seen as a more suitable facilitator for peace talks. Ambassador Bwakira felt that as a Finnish organisation and due to the legacy of its founder President Martti Ahtisaari, CMI can easily be accepted by conflict parties and has already gained broad respect. “We all believe that CMI can make the difference,” he concluded.