“For the first time, I had an opportunity to share my experiences with fellow youth,” Ms Emmily Koiti excitedly explains her initial reaction to CMI’s youth platform in South Sudan.

Despite years of progress in the world’s youngest nation, a violent crisis erupted in late 2013. Emmily knows how it should be resolved: “It must go beyond the negotiators and mediating envoys. The dialogue needs to involve the voice of every South Sudanese, not only those who are fighting.”

South Sudan gained independence in July 2011 after two decades of civil war. However, recurring instabilities and ethnic violence have plagued the nation, with the weak state unable to resolve local conflicts. To support future stability, CMI has been working with youth who are the majority of the population and often instigate violence. A youth platform promotes discussions on critical national issues among young leaders from across the country and connects them with decision-makers. 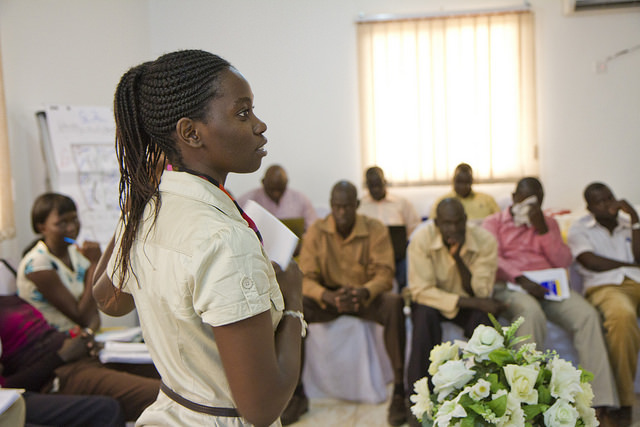 Youth should have a say

25-year-old Emmily is a busy fourth year medical student living in the country’s capital, Juba. But this young lady, who grew up in Uganda during the civil war and only returned to South Sudan in 2007, is also an activist working for a better future for her nation.

Emmily has been an active member of CMI’s youth platform ever since the start when a colleague suggested she should join. For her, it has been important in providing young leaders a space to speak freely and learn to trust each other regardless of region of origin, but also much more.

“I’ve had the chance to meet all the key people whom I had only seen on TV and to ask questions that I’d always wanted to ask,” Emmily says. According to her, the youth members have been able to influence their communities. They have also shown the leaders that they are stakeholders in the future of the country and can jointly agree on important issues.

In December 2013, the underlying instabilities led to politically-motivated violence that still continues four months later. Emmily feels that ways to communicate with citizens both formally and informally are critically needed to solve the conflict. The youth platform remains an important venue and they have already discussed how youth could influence the peace process. She even suggests that the platform approach could serve as a model for engaging all citizens in the future.

Not one to stand by and watch, Emmily has also personally proposed two models for a more inclusive peace process to the official mediators. But saving South Sudan is not enough. She is passionate about promoting women’s education and their leadership potential; working actively to mentor girls. But what are her dreams for her native country?

“I’d like to see a South Sudan where systems are in place, where laws are not just on paper but implemented, and where the parliament speaks on behalf of the people.”