For Yemen to achieve a lasting peace, all political groups need to commit to reconciliation at all levels of the society. This was the joint message of CMI’s two Yemeni dialogue groups gathered in June to discuss how they could jointly promote reconciliation amid continued tensions and violence in the country.

On 10-12 June, altogether 17 Yemeni political actors – 10 women and 7 men – from across the political spectrum gathered in Beirut for a CMI workshop. At the workshop, the participants underlined that reconciliation is essential for the country to move peacefully forward with the much needed political reforms and for the ongoing transition to produce sustainable results.

”Reconciliation is a necessity for Yemen,” Ms Sharfaa Al-Serbi summarised the joint views. The participants affirmed their commitment to work towards overcoming the distrust and antagonisms currently fragmenting the Yemeni society, agreeing that “it’s never too early to start.” 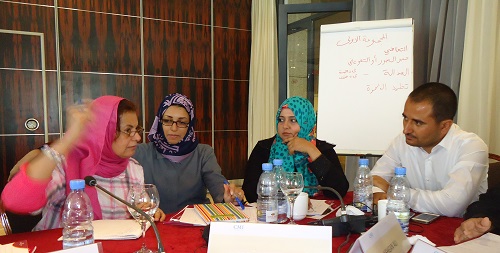 Learning from other reconciliation processes

During the three-day workshop, the participants learned from the lessons of other reconciliation processes and their gendered aspects in post-conflict settings such as South Africa, Colombia and Cambodia. Based on these, they identified the most useful tools and approaches for promoting reconciliation in the Yemeni context. Following discussions on diverse reconciliation mechanisms, the group talked about how they could support the emerging reconciliation processes, particularly at the local and governorate levels, as well as from their different perspectives as men and women.

Many participants stressed that the recent stronger role women have had in the political sphere could assist in bridging political divides. “Women’s roles should not be confined to women’s issues. Women can act as messengers for peace and can promote reconciliation by engaging with leaders,” Mr Abdulrazaq Al-Hegri, an Islah MP, highlighted.

The June workshop participants came from two core groups established by CMI’s Yemen project: the Istanbul Forum for Dialogue (IFD) and the Women’s Forum for Dialogue (WFD). The first group consists of over 25 prominent actors from all key Yemeni political groupings. It has been working together since late 2011 to build confidence among opposing political entities and to support inclusive dialogue on the most critical issues for the national political process.

The Women’s Forum brings together a group of influential women political actors from different backgrounds. It seeks to ensure that women’s views, priorities and needs are taken into account at all stages of the political transition.

Currently, both groups are developing consensual recommendations for the constitution-drafting process. Several participants in the group are also directly involved in the drafting of the Transitional Justice law, into which their experiences of local level reconciliation could be directly fed.