Hajer Sharief’s, 27, organisation Together We Build It encourages women to stand up against violence in Libya. Sharief talked to CMI on the occasion of our International Women’s Day campaign to promote the role of young women in peacemaking. 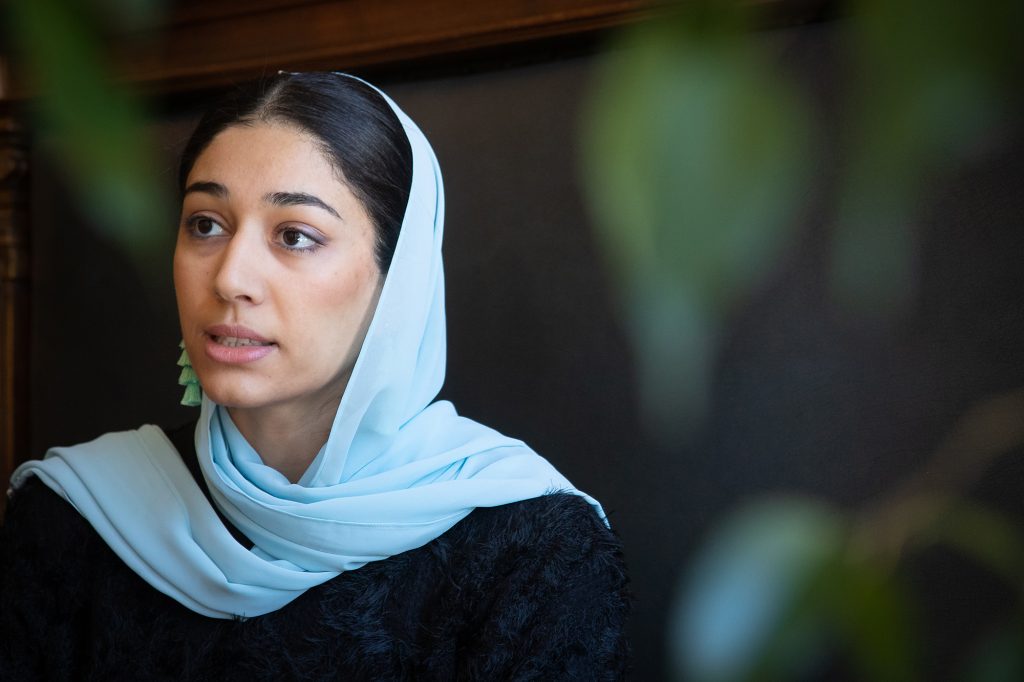 Hajer Sharief emphasises that the work women do for peace in local communities has not been taken into account by the UN-led official peace process in Libya.

When it comes to taking part in peacemaking, young women often face the ‘double burden’ of being both young and women. Overcoming this is key to increasing the chances of sustainable peace, says Libyan Hajer Sharief.

“Young women often know the different grievances that need to be dealt with at grass roots level. A prime minister participating in the official peace talks might know very little of the situation on the ground. So, involving young women is about doing a favour and justice to the peace process itself.”

Sharief, 27, is the co-founder of the organisation Together We Build It, which aims to strengthen the role of women and youth in building peace in Libya. Sharief talked to CMI on the occasion of our International Women’s Day campaign to promote the role of young women in peacemaking.

In Finland, Sharief participated in the First International Symposium on Youth Participation in Peace Processes, organised by the Ministry for Foreign Affairs and the UN together with civil society representatives.

Libya is in the throes of an escalating political crisis and a fragile security situation created by different armed factions. Also archaic religiosity is on the rise. All this diminishes the opportunities for women to be involved in society and build peace. The situation can be particularly difficult for young women.

Together We Build It works with local organizations to engage women of different ages.

“Women are building peace on the ground in many ways in Libya. We are, for instance, increasing their capacity to be involved and raising awareness on the importance of non-violent activism and conflict resolution”, says Sharief.

One of the organisation’s projects is “Super Nsaween”, Arabic for Superwomen. The project is a communications campaign that uses comic book-type stories to encourage women to stand against violence, whether it’s political or sexual in nature, for instance.

The stories present three Libyan super women who address the issues and speak up about them: Naeama a woman in her 50s, Manal in her 20s, and Maram who is 15 years old.

Sharief explains that in its first phases the campaign reached half a million people in Libya. The campaign was launched on social media and extensively reported in national media.

“What the campaign really managed to do was to raise awareness on really sensitive matters in Libyan society and address them in a very useful way.”

“Even if a conflict is political in nature, it still affects civilians”

Sharief emphasises that the work women do for peace in local communities has not been taken into account by the UN-led official peace process nor by the different initiatives by foreign governments.

Thinking about the important role young women could have at the official peace tables takes Sharief back to the early days of her own organisation. She co-founded Together We Build It in 2011 at the age 19 when Libya was in the midst of a violent revolution.

At the time she was a medical student and working as a volunteer at Tripoli’s central hospital. The suffering of innocent civilians shocked her, and made her realise how important it is to enable broad participation within society to prevent and resolve conflicts.

“Even if a conflict is political in nature, it still affects civilians. And if a solution is going to be reached to solve that political conflict, everybody needs to be on-board.”