How CMI helps build peace in war-torn Yemen? What stands in the way of women’s participation in peacemaking? And why future wars could be fought over water? Here is a selection of our top stories from 2018. 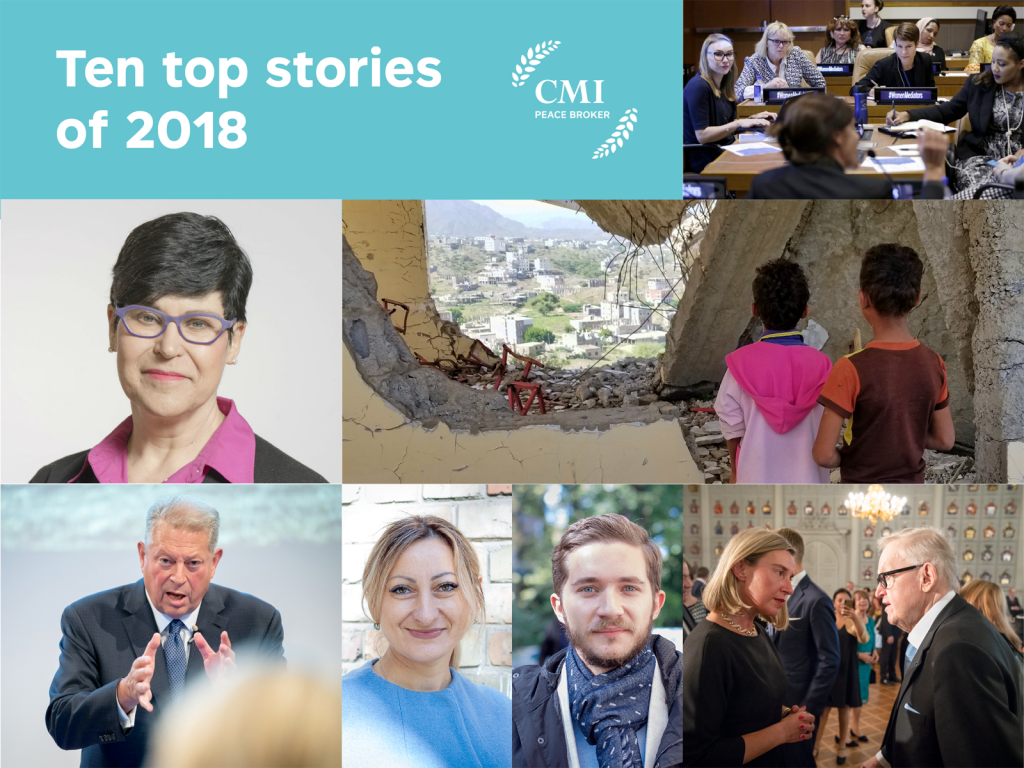 Dialogue helps heal the divisions caused by the war in Ukraine

As the war in Ukraine drags into its fifth year, there is an urgent need for dialogue between Ukrainians. To build common ground, CMI has helped organise Public Marathon discussion forums throughout the country. The Public Marathon breaks down taboos, building dialogue between groups of people that hold another in mutual mistrust, such as internally displaced people and war veterans.

The center and the autonomy find common ground in Moldova

Over the past three years, CMI-supported dialogue has strengthened the relationship between the center and the autonomy in Moldova. For instance, the dialogue process has had a positive impact on people’s living conditions in the autonomous region of Gagauzia. “I have seen incredible changes since we initiated the dialogue process in 2015”, says the Speaker of Moldova’s Parliament, Andrian Candu.

Independent organisations can support efforts to resolve the Yemeni conflict

Yemen’s peace talks continue as the world’s worst humanitarian crisis deepens in the country. Determined peace efforts are now needed at several levels, writes the Head of our Middle East and North Africa team, Maruan El-Krekshi. Independent organisations such as CMI can be effective in informally supporting efforts to resolve the Yemeni conflict.

A new strategy aims to strengthen CMI’s role as one of the leaders in the field. We focus on enhancing women’s participation and developing innovative approaches to peacemaking, writes our Executive Director Tuija Talvitie.

Strengthening women’s role in peace processes has long been a priority of the international community. However, major misconceptions continue to weaken efforts to make gender-sensitive peace mediation a reality. There are at least six persisting myths standing in the way of progress, writes our Women in Peacemaking team.

Former US Vice President Al Gore remains optimistic that humankind can change course, highlighting the role of ordinary citizens, business and independent conflict resolution organisations such as CMI, in tackling the climate crisis. Gore gave an exclusive interview to CMI on climate change ahead of his visit to Finland.

Climate change further complicates conflicts. Besides concentrating on cutting emissions, there needs to be a focus on how fragile states can adapt to the impacts of climate change as a cause of instability, writes our Communications Manager, Antti Ämmälä.

It was 10 years ago that CMI’s founder Martti Ahtisaari was awarded the Nobel Peace Prize. Ahtisaari’s Nobel award gave abundant international attention to peace mediation and made it a respectable instrument of foreign policy. During the past decade, peace mediation has increasingly been recognised as an effective and inexpensive way of addressing conflicts and their root causes.

Finland has developed over the course of a century into one of the most stable countries in the world. The main roots of peace in Finland are a strong democratic culture and institutions, and a progressively-built welfare state. The Finnish story inspires hope in countries where CMI works to prevent and resolve conflicts.

Building strong relationships and having an inclusive peace process were the key success factors in reaching the Northern Ireland peace agreement 20 years ago. “Peacebuilding is the art of trying to make tomorrow better. We cannot change the fact that horrendous things happened. But we could change tomorrow, and try to make it better”, emphasises the former Prime Minister of Ireland, Bertie Ahern.