After 15 years, the need to actively build peace in Aceh is not over

Peace in Indonesia’s Aceh has stood the test of time and enabled sustainable development. However, after 15 years, the need to actively build and consolidate peace is not over.  “Leadership is ever more important as Aceh and the region face new challenges such as climate change and the Covid-19”, says Oskari Eronen, Head of CMI’s Asia team. 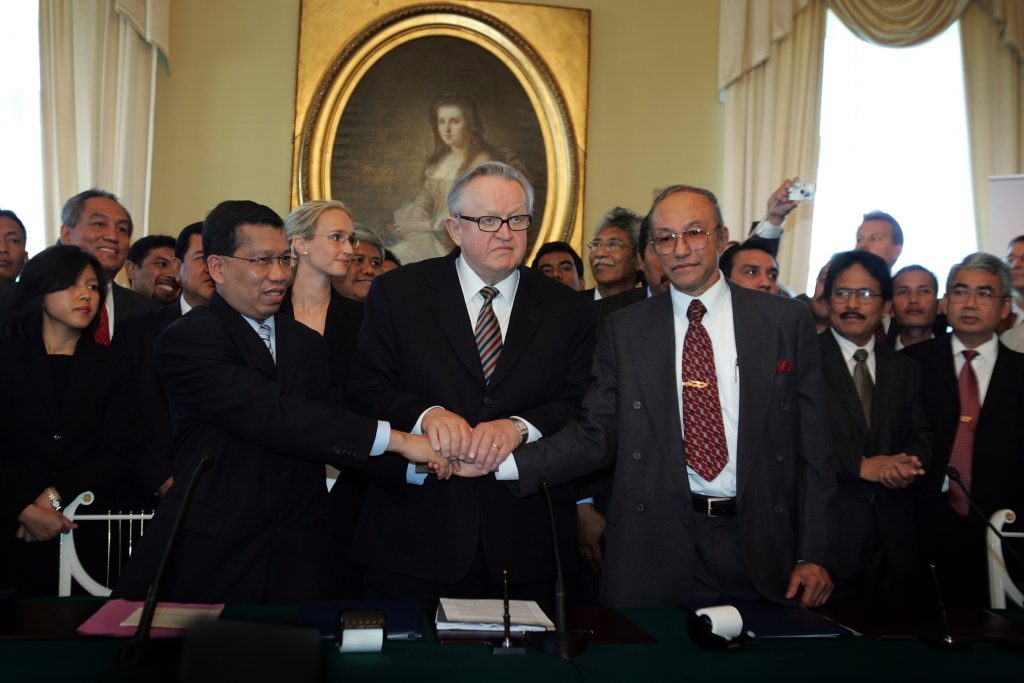 The Aceh peace agreement was signed by the Minister of Justice of the Government of Indonesia Hamid Awalud and the leader of the delegation of the Free Aceh Movement Malik Mahmud and was witnessed by President Martti Ahtisaari. Photo: Jenni-Justiina Niemi.

Today marks the 15th anniversary of the Aceh peace agreement that ended an almost three-decade long conflict between the Government of Indonesia and the Free Aceh Movement (GAM). The agreement, mediated by president Martti Ahtisaari and CMI, was signed in Helsinki, Finland, on August 15, 2005.

The agreement gave the province of Aceh an autonomous status within the country and paved the way for rebuilding the province after a devastating tsunami where 130 000 Acehnese had lost their lives.

The agreement was a result of will and determination of the parties. Peace has stood the test of time and serves as an inspiration to others. Aceh is an example of how a successful peace process enables sustainable development. Poverty and unemployment have declined.

However, after 15 years, the need to actively build and consolidate peace is not over.

“Peace is a long-term mission. The leaders involved and the people have common high stake of strengthened peace and stability in Aceh and in Indonesia more widely. This leadership is ever more important as the region faces new challenges such as climate change and managing of the Covid-19 crisis with its economic, social and political repercussions”, says Oskari Eronen, Head of CMI’s Asia team.

Read here how the tsunami created the scope for reconciliation in Aceh — could the corona pandemic have a similar effect on current conflicts?