At its annual meeting this year, CMI has elected Alexander Stubb as its new chair of the board. Stubb takes over from Martti Ahtisaari, who will continue as an adviser to CMI. 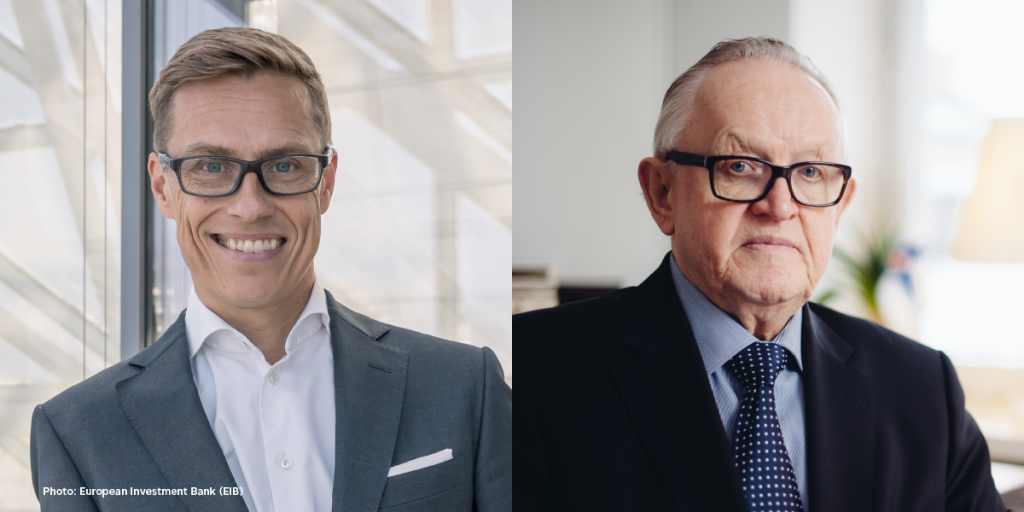 At the 2017 annual meeting of the board of CMI, held in Helsinki on Wednesday 29 November, the board of directors decided to elect Alexander Stubb as the new chairman of CMI. Stubb is the vice-president and member of the management committee of the European Investment Bank, and was also Prime Minister of Finland from 2014–2015.

Stubb takes over leadership of CMI from President Martti Ahtisaari, who founded CMI in 2000. Ahtisaari has been chairman of the board from the very beginning.

“I’m very proud of how CMI has grown and developed into one of the most respected operators in its field over the past 17 years. CMI is almost an adult now, and will get along excellently without me”, Ahtisaari said at the annual meeting.

Ahtisaari will continue with CMI in an advisory capacity, and will therefore remain closely involved with the work of the organisation.

“The goal with handing over the reins is that the organisation will continue from where I left off, through its work and the values that CMI represents. The new chairman will strongly support these efforts.”

“It is a great honour to follow in the footsteps of President Martti Ahtisaari. I will do my utmost to help the CMI develop as one of the leading players in peace mediation”, said Stubb.

Ahtisaari has already announced that he will resign from the chairmanship of the board, and will propose Stubb as his successor. Ahtisaari told the meeting of the CMI board on Wednesday that there were three criteria for choosing the new chairperson. Based on these criteria – a Finnish outlook, political experience, and an international outlook – Stubb was the most suitable candidate.

“CMI is a Finnish organisation, with its headquarters in Helsinki. We act according to Finnish law, and we represent Finnish and Nordic values; these are the most important pillars of our work”, Ahtisaari said.

“We practise and promote equality both within our organisation and further afield, and Finnishness is one of our main advantages. Finland has a good reputation in the field of peace mediation, and we want to continue to do our part to further develop this profile.”

Thanks to his many years of experience in ministerial posts, Alexander Stubb has impressive leadership credentials. In addition to his time as prime minister, Stubb has been Minister for Foreign Affairs and Minister for European Affairs and Foreign Trade. Stubb has also worked for a long time in various European Union positions.

“The experience of how political processes work is vital to understanding CMI’s work”, Ahtisaari emphasised.

Alexander Stubb has built up an extensive network of international connections over the years.

“CMI is a Finnish organisation, but our focus is mainly on the wider world. We need a person who is well-known and respected internationally.”

Ahtisaari added that he also had a further, fourth selection criterion: the new chairman of CMI should be a representative of a younger generation.

“We need to keep up to date with things all the time. For this to be possible, the chairperson of the board of CMI needs to be someone who personally understands world events, and who maintains a constant interest in ongoing developments and emerging trends in the world.”