Fazer is a Finnish pioneer in ethically responsible business, and also supports CMI’s efforts in peacemaking in conflict situations around the world. 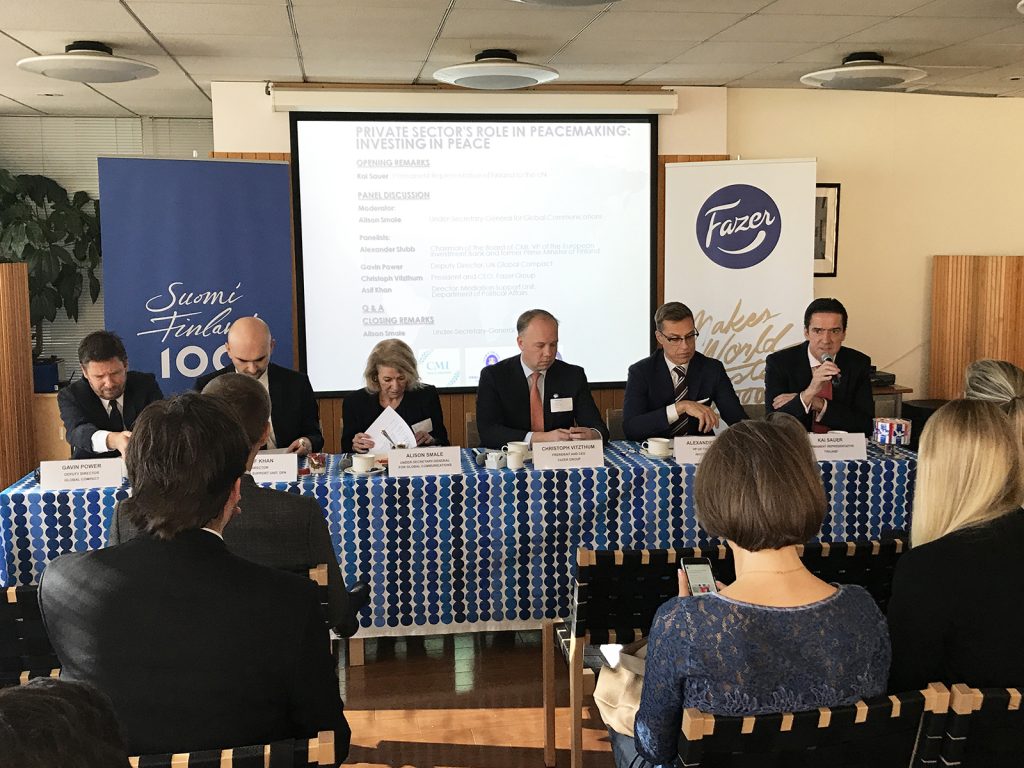 The Finnish mission to the United Nations organised a breakfast event in November in New York. The theme of the event was the role of the private sector in peacemaking.

“Peace is actually a good and profitable business for companies, and at the same time it benefits society as a whole. Peace is the essential foundation of all development,” said the conflict resolution organisation CMI’s new chairman Alexander Stubb in November in New York.

Stubb was speaking at a breakfast event organised by the Finnish mission to the United Nations. The theme of the event was the role of the private sector in peacemaking. The Finnish business sector was represented at the event by Fazer, one of Finland’s leading brands and a pioneer in ethical and sustainable business abroad. Fazer also supports CMI’s work in conflict prevention and resolution.

Fazer’s operations are based on ethical principles

The ethical principles governing Fazer’s operations are based on the principles of the UN Global Compact. They form the framework for Fazer’s approach. Fazer signed the Global Compact initiative in 2012. Business signatories to the compact undertake to uphold, in their operations and strategies, ten universally accepted principles related to human rights, labour, the environment and anti-corruption activities.

In its business operations, both in Finland and internationally, responsibility for Fazer means not only supporting people’s daily well-being, but also supporting and promoting a more balanced distribution of resources and shared value in society. For these reasons, it is a natural choice for Fazer to support the work of the Finnish CMI, in developing and creating conditions for peace in conflict areas around the world.

Doing good is profitable, too

“In the long term, businesses profit from peacemaking,” said Fazer Group President and CEO Christoph Vitzthum at the event in New York.

When it comes to the development and maintenance of a stable and competitive society, Alexander Stubb emphasised, some of the key foundations for such societies in the Nordic countries are equality, a high standard and equitable provision of education and healthcare, and strong institutions.

“Nordic values are also exemplified and strongly promoted by Finnish companies such as Fazer,” Stubb said.

“One of the best investments that a globally operating company can make in its operation is to support stability, conflict prevention and resolution. One great way of doing this is to promote organisations like CMI.”

Companies have a growing social influence

Today, companies can make increasingly important contributions to society. The days are gone when companies could just sit on the fence when it comes to the imbalances and injustices of the world. Instead, they are increasingly taking a stand, listening, and involving consumers.

The results of a recent study published by the Finnish communications agency Miltton tell the same story. The study was carried out in Finland, Sweden and Estonia, and the majority of respondents in all three countries wanted companies to dare to speak out, to explain their values, and in general to participate in social debate.

Similar results were obtained by the United Nations in a study * that showed that companies can have a decisive role in achieving the goals of sustainable development, such as fighting corruption in developing countries and other to tackle social problems in those countries. Globally active companies can use their guidelines and policies on responsibly and ethically acceptable practices to help reduce corruption, promote the rule of law, and promote transparency and good governance.

Cooperation between the public and private sectors

Today, companies can make increasingly important contributions to society. In the panel discussion at the event, Asif Khan, Chief of Mediation Support at the United Nations Department of Political Affairs pointed out that all conflicts benefit somebody, for example the weapons industry. Khan stresses the importance of organisations working together with the private sector to build processes and indicators for reconciling commercial interests and global development goals.

Although companies could be very helpful in conflict prevention and reconstruction, Khan said, the actual peace mediation should be left to professionals, states and international organisations.

Finland’s Ambassador to the United Nations Kai Sauer said at the event that the role of companies in helping to correct international and social inequalities and injustices is still only in the very early stages, and has a long way to go.

“In today’s world, economics, business and politics are intertwined. When something happens somewhere, the effect is felt not just there but everywhere. The private and public sector must find common ways of doing things, since this would benefit all parties,” Sauer said.

Finland turns 100, and remains engaged with the world

This week marks the centenary of Finland’s independence. In that time, the country has developed from a poor agrarian society into one of the world’s most competitive, equitable and open societies. The main themes for Finland during this jubilee year have been taking responsibility for others and their well-being and the environment. No man, woman or organisation is an island – success requires cooperation between different people, communities and companies.

CMI’s founder, Nobel laureate Martti Ahtisaari, emphasises the importance of Nordic values in building a fair and equal society. These values are shared by globally operating Finnish companies such as Fazer. The operating principle of these companies is to benefit people and their living environment, while at the same time upholding sound business principles. As Ahtisaari has said of the collaboration between CMI and Fazer:

“It’s easy when both are top league in their respective fields.”

*Business and SDG 16: Contributing to peaceful, just and inclusive societies