Martti Ahtisaari to retire from leadership of the CMI board

Martti Ahtisaari will have more time to concentrate on supporting CMI’s peacebuilding work. 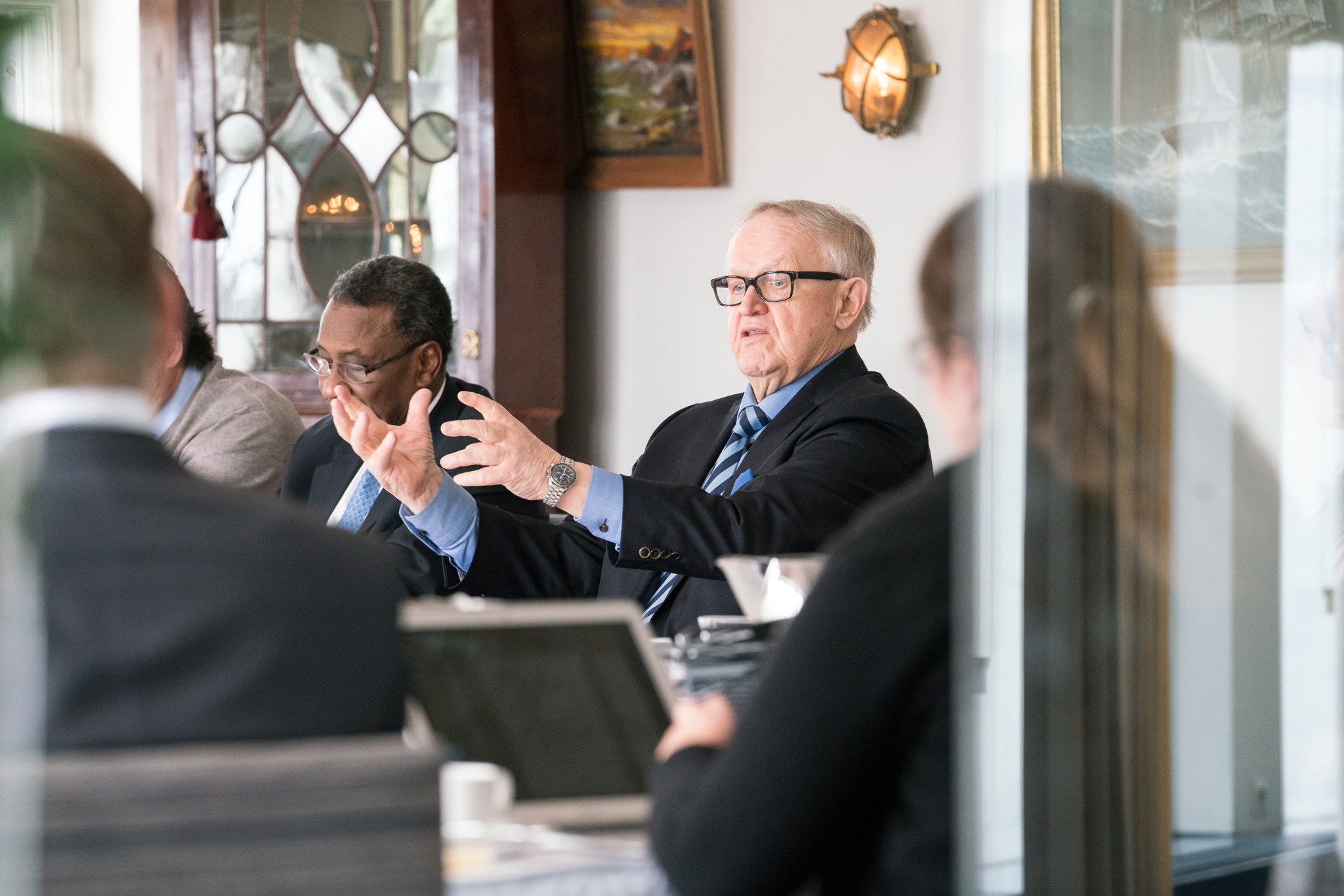 Martti Ahtisaari founded CMI in 2000, and has led the organisation as Chairman of the Board continuously since then. Photo: Riku Isohella

The founder of CMI, the former President of Finland Martti Ahtisaari, will step down as chairman of the board of CMI in the autumn. One reason for Mr Ahtisaari’s decision is to have more time to concentrate on supporting CMI’s peacebuilding work as an advisor and expert. Mr Ahtisaari has recommended former Prime Minister of Finland Alexander Stubb as the next chairman of the board of CMI.

Mr Ahtisaari founded CMI in 2000, and has led the organisation as Chairman of the Board continuously since then.

Ahtisaari announced his decision at the spring meeting of the board on Tuesday 9 May. He wanted to make the matter known in good time, he says, so that the change of chairperson can be carried out in an organised and transparent way. This will give Mr Ahtisaari time to support the incoming chair in taking up the position, which in turn ensures that CMI’s core activities will continue to run smoothly. Mr Stubb will officially assume the chairmanship of the board of CMI at the autumn board meeting in late November.

Mr Ahtisaari will remain closely involved with CMI. After handing over the chairmanship he will focus on his advisory role and on making his many decades of expertise available to our peacebuilding specialists. In addition, Mr Ahtisaari will work on assembling an international advisory network to support CMI’s activities. He will continue to have his offices and staff in CMI’s headquarters in Helsinki.

Mr Ahtisaari, who turns 80 in June, feels that now is the right time for him to pass on the chairmanship. Thanks to his vision and expertise, CMI has become firmly established as one of the world’s leading organisations for conflict resolution and prevention.

“What remains most important to me is that CMI maintains its position as one of the world’s most trusted and respected peace mediation organisations,” Mr Ahtisaari says.

Alexander Stubb has an extensive international network of contacts

Mr Stubb’s selection as Chairman of the Board is based on his long experience in policy leadership. He has an extensive international network of contacts, and a deep understanding of the new generation of advocacy.

Alexander Stubb has been a Member of the European Parliament, and before his time at Prime Minister he was the country’s Minister of Foreign Affairs and also Minister for European Affairs and Foreign Trade. Stubb has also worked for a long time in the European Union in various capacities. He holds a doctorate in international politics from the London School of Economics.

The chairmanship is a position of responsibility. Stubb will continue his work as a Member of the Parliament of Finland.

“The appointment as Chairman of the Board of CMI is a great honour,” Mr Stubb says. “CMI’s expertise in peace mediation is world-class. It will be a humbling experience to enter what is a new field for me, one in which I have great interest. I have always been adamant that Finland is one of the world leaders in peace mediation.”