CMI invited a group of Iraqis to Helsinki to discuss Iraq’s future and to contribute to develop ideas for a common vision for the country. 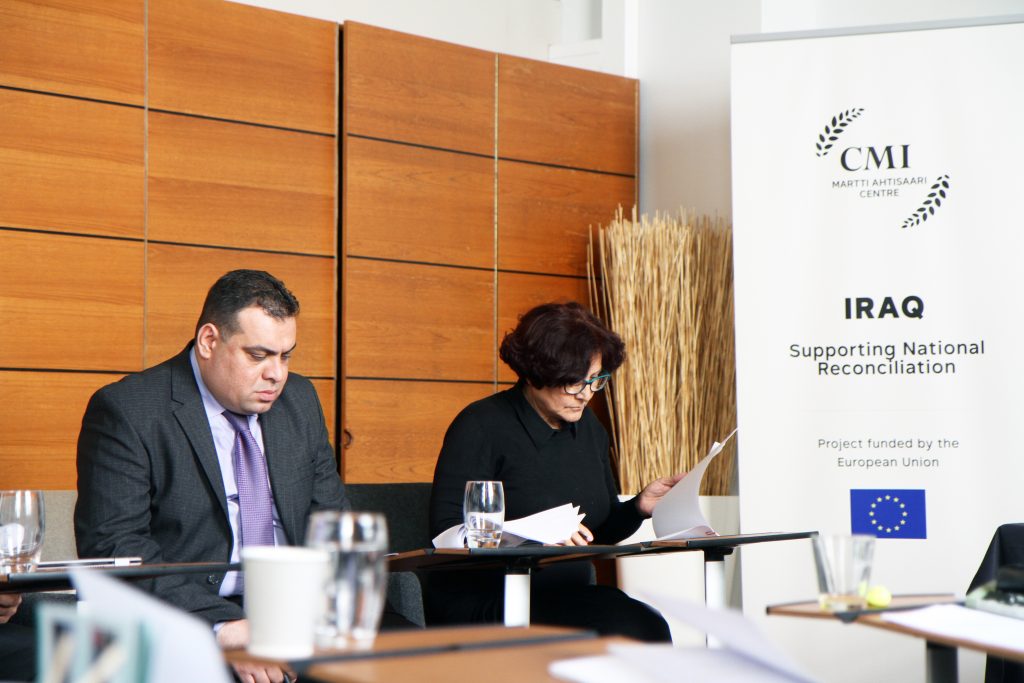 The difficulties facing Iraq are not for the faint of heart. The drawn-out civil war in Syria is seriously harming the fragile institutions of its neighbouring country also. On one side Isis must be defeated, while on the other hand the various ethnic and sectarian groups in Iraq must engage in dialogue and national reconciliation to set the country on a path of stability and future prosperity. While millions of internally displaced Iraqis await compensation and the rebuilding of their cities, everyone wants to see efficient state institutions guaranteeing the rule of law and good governance. Above all, the country must be prevented from being fragmented.

Developing the strategy for national reconciliation in Iraq

“That is the most important goal, to mend the rifts between us and to keep Iraq whole,” says Iraqi researcher Khaled al-Maini. He was interviewed by the Finnish national daily, Helsingin Sanomat. Al-Maini is one of the influential Iraqis who spent the second week of June in Helsinki pondering the fortunes of Iraq and contributing to developing ideas for a common vision for the country with CMI’s support. CMI invited the team – consisting of politicians, researchers, and representatives of non-governmental organisations – to prepare for the formal development of the strategy for national reconciliation in Iraq. This is a project that CMI has been working on for nearly two years in close cooperation with the Iraqi government and other relevant stakeholders across the national spectrum. Due to the political sensitivities and security concerns involved, participants met in the calm environment of Helsinki, instead of Baghdad this time.

“The neutral environment of Helsinki does make a difference,” says CMI’s Project Manager for Iraq Hussein al-Taee, who spent the week facilitating the discussions and helping with other CMI experts to draft the strategy of the Iraqi delegation. “The participants hardly ever meet in Baghdad. Meeting in a neutral environment with trusted facilitators supporting the strategy design helps greatly in developing group cooperation and mutual trust.”

The Helsinki meeting also gave the Iraqis the ideal opportunity to engage in peer learning about Finnish political and societal institutions. In Helsinki the group visited the Finnish Parliament, the headquarters of Statistics Finland, the national broadcaster Yleisradio, and the Ministry of Justice. After their introduction to Finland’s political history, the Iraqis said they were impressed and inspired by the country’s successful national reconciliation after a brutal civil war and steady progress towards prosperity.

Despite Iraq’s ongoing internal tensions, parliamentarian and judge Qassem al-Aboudi expressed the group’s confidence that Iraq will overcome the burden of history and succeed in its efforts to build peace and unity. “I draw hope from Finland’s history,” he told Sami Sillanpää of the Helsingin Sanomat. “Finland succeeded in reconciliation after civil war, even though it took a long time. I know that Iraq can manage the same.”