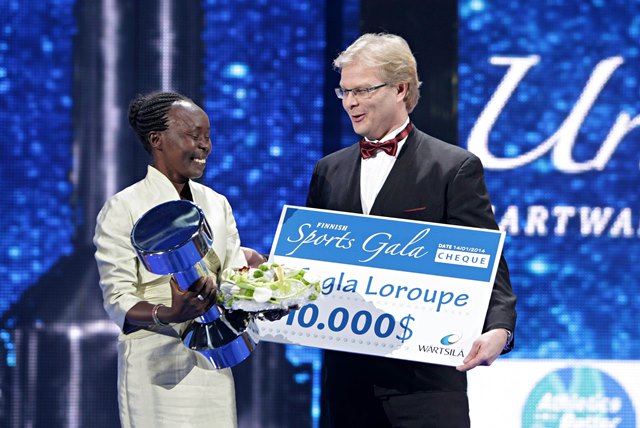 Tegla Loroupe received the first-ever{jcomments off} Sports Philanthropist award at the Finnish Sports Gala. The 10 000 dollar prize was given by Wärtsilä’s Executive Vice President of Communicatons and Branding, Atte Palomäki. Photo by Pekka Salonen / EMG
This year the Finnish Sports Gala highlights the importance of peace and conflict resolution by giving the first-ever Sports Philanthropist award to Tegla Loroupe, Kenyan three-time world half-marathon champion and an internationally recognised spokeswoman for peace and education. For Loroupe, 40, sports is an important tool for promoting peace – she has organised annual Peace Runs since 2003, and has established a school and an orphanage in the city of Kapenguria, Kenya.
The 10,000 euro prize, sponsored by Wärtsilä, was presented on CMI’s behalf by Executive Director Tuija Talvitie this evening at Hartwall Arena in Helsinki.
During 2014 CMI will start cooperating with the IAAF (International Association for Athletics Federation) to promote a better world through sports.
Share
Facebook Twitter LinkedIn E-mail
Want to keep up with
CMI’s work?