The annual meeting of the Crisis Management Initiative (CMI), Friday 4 December, has decided that the organisation will operate as a foundation. The name of the new foundation will be the CMI – Martti Ahtisaari Peace Foundation. The creation of the foundation will ensure the future continuity of Finnish peace mediation expertise and improve CMI’s administration and oversight, as well as its operational and funding opportunities. 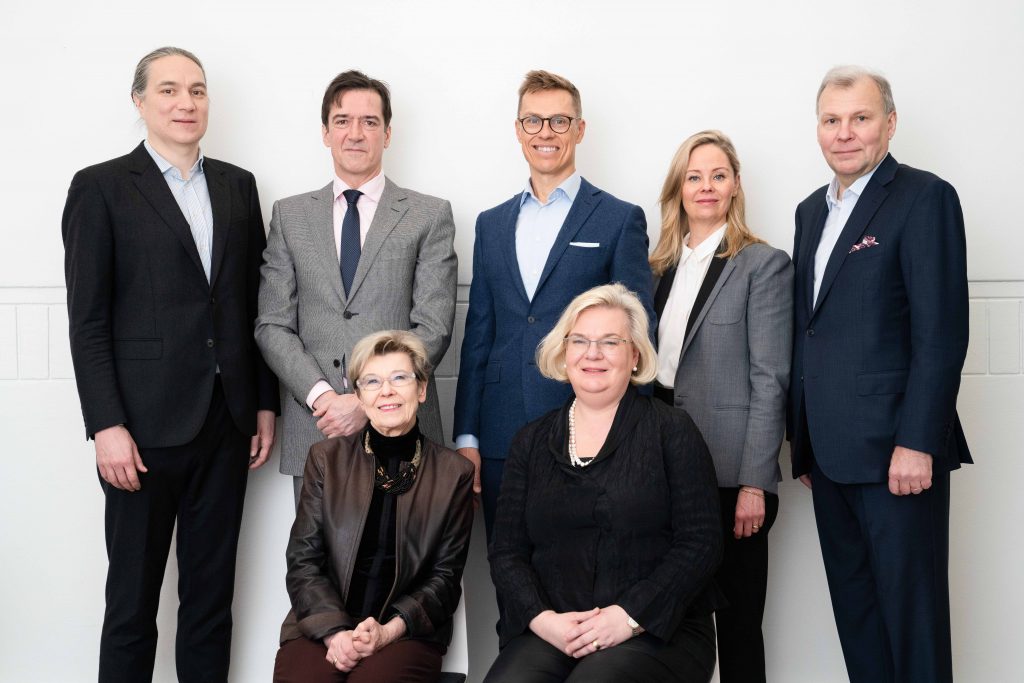 CMI’s current board, from the top to right starting from the upper row: Aleksi Neuvonen, Kai Sauer, Chair of the Board Alexander Stubb, Veera Heinonen, and Kari Lautjärvi with Kirsti Lintonen and Gunvor Kronman seated. Board Member Christoph Vitzthum is not pictured.

The purpose of the new foundation, according to its rules and regulations, is to promote peace and the capacity to prevent and resolve crises globally. The foundation will protect President Martti Ahtisaari’s global legacy of peace work. It will guarantee the continuity of Finnish peace mediation expertise, improve CMI’s administration and oversight, as well as its operational and funding potential. CMI’s work and activities will otherwise continue as before. The aim is to establish the activities of CMI as a foundation at the start of 2021.

The chair of the CMI Board Alexander Stubb said: “In this tense world political situation, there is a growing need for independent actors such as the CMI that can create the conditions for formal peace efforts and support them. The corona crisis threatens to make conflict-affected countries even more fragile and to spark new and old tensions. The foundation will secure the operating preconditions for CMI’s work and the continuity of Finnish expertise in peace mediation. The fact that the new foundation bears the name of Martti Ahtisaari shows the importance of the values ​​and practices he represents in the area of peace mediation.”

This year marks the 20th anniversary since the foundation of CMI. Martti Ahtisaari established the organisation following his term as president of Finland, in 2000, because he believed that all conflicts could be resolved. During the intervening 20 years, CMI has developed into one of the world’s leading conflict resolution organisations.

CMI has managed to continue its work successfully despite the corona pandemic. CMI has brought together parties to conflicts virtually in a situation where it is difficult to arrange physical meetings. In recent years, the operational turnover of CMI has steadily increased by about 10% a year. For the current year, CMI has managed to secure its financial operating conditions despite the difficult environment. In the coming years, CMI’s growth is expected to continue and the foundation will increase its funding base.

Marko Ahtisaari, the artistic director of the Helsinki Festival, has been invited to join the board of the new foundation. Alexander Stubb is the chair of the board. Other board members are Gunvor Kronman, CEO of Hanaholmen Cultural Centre; Aleksi Neuvonen, founder of the Demos think-tank; Kari Lautjärvi, Lawspeaker and Doctor of Law; Christoph Vitzthum, President and CEO of Fazer Group;  Veera Heinonen, Director of Communications and Public Affairs at Sitra, and Kai Sauer, Under-Secretary of State for Foreign and Security Policy at the Ministry for Foreign Affairs of Finland.