Coronavirus adds to fragility in conflict countries: More help is needed in peacemaking and in building resilience

In the face of the coronavirus crisis, conflict and conflict-prone countries are at risk of taking the hardest hit by the pandemic. These countries will have to fight even harder against fragility as a result of this crisis and need more help in their peace processes and in building resilience to meet the hopes of their people. During this crisis, CMI can use its expertise to generate and enhance dialogue, keep all channels open and advance trust building measures. We will use possibilities of new virtual tools and platforms to reach our stakeholders. 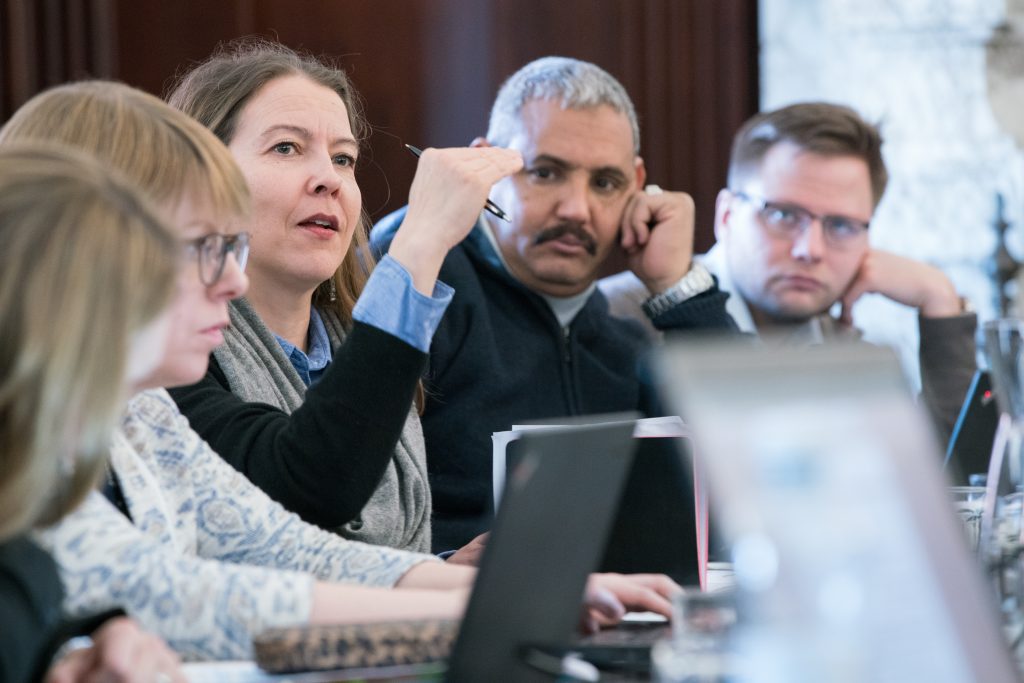 “Most likely in countries where societal fabric has been weakened due to armed conflicts, it is harder to come together even with these threats that come from the outside”, says Elisa Tarnaala, CMI’s Senior Advisor. Photo: Riku Isohella

On 27 March 2020, CMI’s top experts gathered to discuss the coronavirus crisis and its impact on peacemaking. It was a matter of great concern that, while Europe is facing a health crisis the likes of which we have not seen for a century, it will be conflict zones that will be the hardest hit.

“What we are observing in Eurasia right now is that people who were already vulnerable and living in situations of insecurity in the middle of conflict zones are the ones who are most effected by the pandemic. Because of the closure of borders and conflict boundaries, these conflict zones are in fact becoming ghettoes. They usually already have poor medical systems, and those systems are likely to collapse much quicker than the stronger medical systems in more well-off parts of the world”, says Denis Matveev, CMI’s Senior Advisor.

UN Secretary-General António Guterres has called for a global ceasefire in the world’s conflict zones to protect vulnerable civilians from the fallout of the pandemic. Guterres emphasised that it is the most vulnerable – women and children, people with disabilities, the marginalised, displaced and refugees – who are at most risk of suffering from the disease. Guterres’ plea for ceasefire has been echoed by leaders all over the world.

Focusing on the common threat may also create momentum for peacemaking

CMI’s experts agree that conflict and conflict-prone countries will become even more fragile as a result of this pandemic. Social and political divisions might accentuate. This will impact on societies ability to deal with both old and new tensions.

“Most likely in countries where societal fabric has been weakened due to armed conflicts, it is harder to come together even with these threats that come from the outside. I take the example of Colombia where the country just came out of a peace process, but the society is still very much impacted by the 40 year old conflict. The crisis could deepen fractures that still have not been healed”, points out Elisa Tarnaala, CMI’s Senior Advisor.

These conflict states with vulnerable populations will need more than ever help in their peace processes and in building resilience to meet the hopes of their people for peace. Independent conflict resolution organisations such as CMI are well-placed to do this work as official actors, such as governments, are now more focused on domestic health and economic concerns.

“Generating dialogue, supporting inclusion of different marginalized groups and building trust is needed now more than ever in these fragile societies so that they can work their way out of this prolonged crisis. All this is at the core of CMI’s expertise”, says Mikko Patokallio, CMI’s Advisor.

On the positive side, focusing on the common threat of coronavirus may in some contexts create momentum for peacemaking. This can apply, for instance, to ceasefires. In the long term, the crisis could breathe life into waning international cooperation.

“In this case, we are dealing with a common challenge. I think there is a lot of room for cooperation and lessons learned on how we have coped in the future; just because this is common, the same crisis for us all”, summarizes Roxana Cristescu, CMI’s Director for European Affairs. 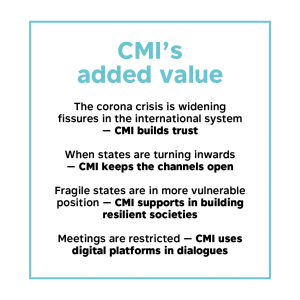