The UN doesn’t have monopoly on wisdom in peacemaking, says former Under-Secretary General: “Groups like CMI can be more creative”

Peacemaking needs new tools, says former UN Under-Secretary-General Jeffrey Feltman. According to Feltman, the role of independent conflict resolution organisations has grown in importance. “I am very proud of the work the UN does. But in some ways groups like CMI can be more creative”, says Feltman. 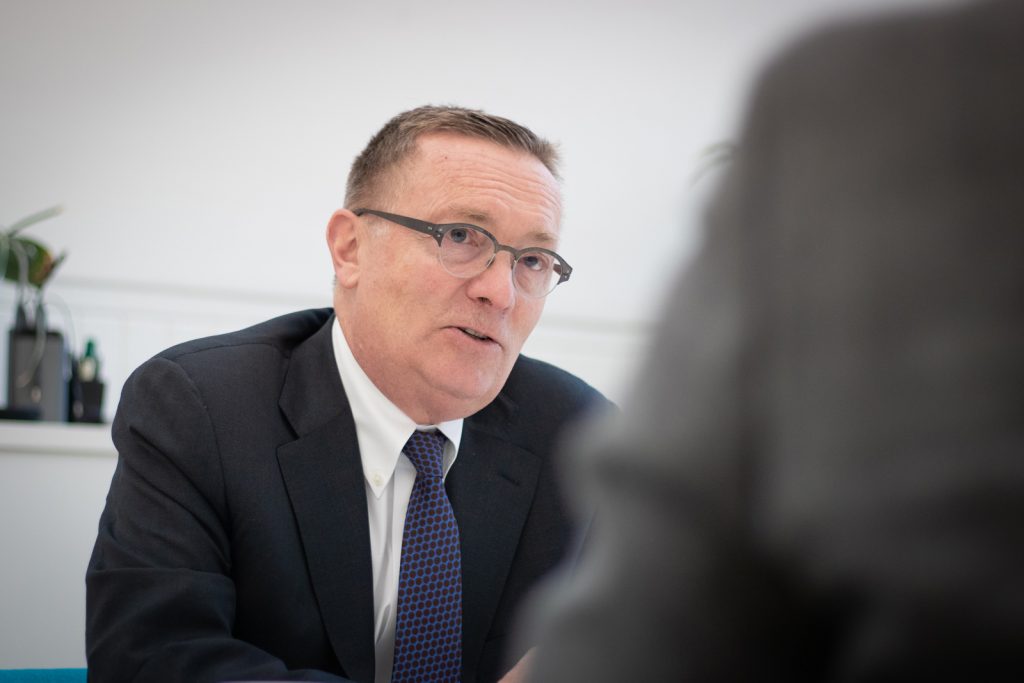 From 2012 to 2018, Jeffrey Feltman oversaw the UN’s work on conflict prevention and resolution.

The golden age of peacemaking. This is how the 1990s and early 2000s are often called.

The Cold War had ended and peace mediation boomed. The number of wars and battle deaths declined dramatically. The United Nations was at the forefront of peacemaking, playing a strong role in ending a long list of conflicts, from Lebanon to Guatemala.

In short, war seemed to be going away.

Now the world looks far more different. The number of conflicts is on the rise and the world is faced with several major, persistent wars with high casualty rates. Altogether, the wars in Syria and Yemen have killed over half a million people.

“We’re clearly not in that golden age of peacemaking anymore. But I also don’t think we can recreate that age, even with the best of intentions. The world has changed. We need to look at what is still relevant from that golden era, but also look at what are the new ways of going forward”, says former UN Under-Secretary General Jeffrey Feltman.

“I don’t think the UN has monopoly on wisdom, leverage or influence”

Feltman is a seasoned US diplomat with decades of experience, especially in the Middle East and North Africa. From 2012 to 2018, Feltman oversaw the UN’s work on conflict prevention and resolution. He now works as a fellow at the Brookings Institution and at the UN Foundation, both in Washington DC.

The changing role of the UN is one of main the main reasons why the golden age of peacemaking now seems like a distant dream. In recent years, the ability of the UN to uphold peace globally has been heavily affected by the return of great power politics.

The world has moved from a US-led multipolar world to a multipolar one, with Russia and China as new challengers. Competition between great powers has blocked the ability of the UN Security Council to act as the ultimate arbiter of international conflicts.

The disagreements make it more difficult for the UN to give clear mandates, realistic objectives, and necessary political support to mediation efforts. The difficulties the UN faces give space to other actors and approaches.

“I don’t think that the United Nations has monopoly on wisdom, leverage or influence in peacemaking. I am very proud of the work the UN does, but in some ways groups like CMI can be more creative”, Feltman summarises. 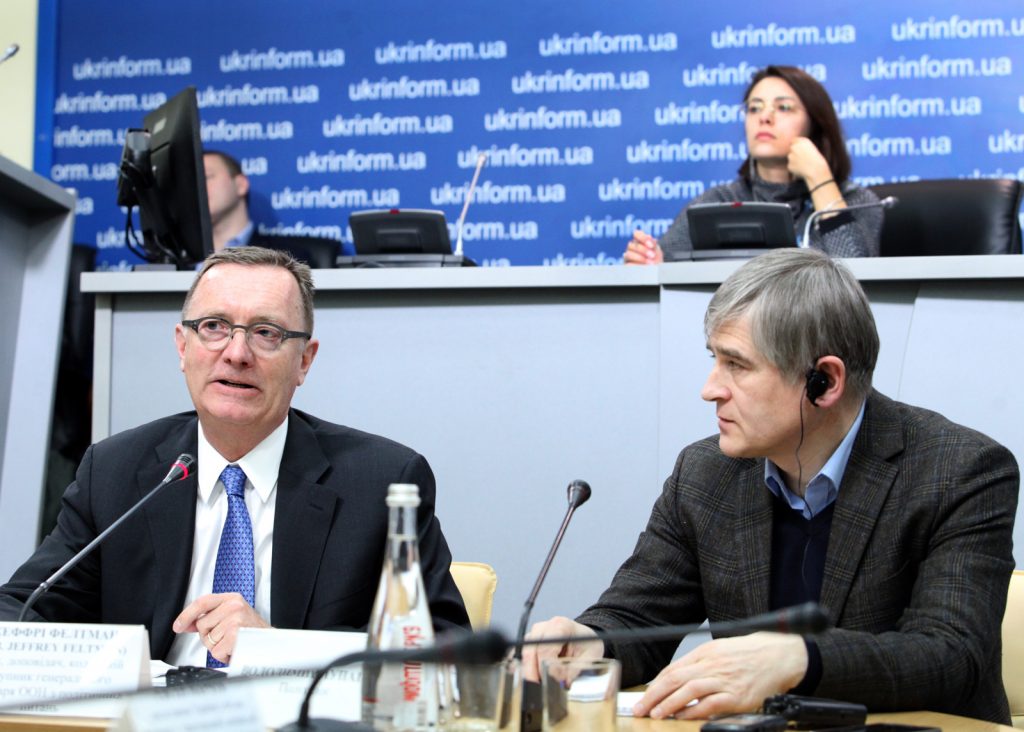 Feltman was a keynote speaker at the 8th session of the National Platform that CMI organizes with its partners in Kyiv. Political analyst Volodymyr Lupatsii on the right.

Feltman highlights the fact that independent peace mediation organisations can avoid the glare of publicity that a UN mediator has, and therefore avoid some of the politicisation of diplomatic work.

Unlike a UN mediator, independent organisations do not have to operate on Security Council mandates or report to it, which gives them more room for manoeuvre.

Feltman says that this gives CMI flexibility, for instance in Yemen, where it is trying to help broker local ceasefires. This de-escalation of violence could, in turn, generate positive momentum nation-wide.

“Having groups like CMI on the ground can help create an atmosphere that leads to a peace agreement”, Feltman observes.

Independent organisations can also effectively promote the opportunities for marginalised groups, such as women and youth, to participate in peace processes.

“You can’t ignore the civil society and not take into account women who are going to play a large role in whether a peace agreement is going to last or not. If you exclude the women, the changes of any peace agreement lasting go down”, Feltman says.

Different peace actors can complement each other

It is important to see how different peace actors can complement each other, Feltman says. For instance, non-UN actors can initiate or design a process that then moves to the UN at an appropriate level.

Feltman takes the case of Colombia, where the peace agreement signed in 2016 ended 50 years of violence. The UN had no formal role in the negotiations, as the Colombian government and the Farc guerillas did not want it as a mediator. The peace process was instead facilitated by Norway and Cuba.

“The UN came in at a later stage and played an extremely important role, a role that no one could have played.”

The fact that the Security Council blessed the agreement gave it legitimacy. The UN also provided the parties with an element of trust for implementing the agreement.

The UN Secretary General must report to the Security Council every three months on the progress made.

“The parties can show the world they are living up to their commitments, or they have to face the world when they aren’t”, describes Feltman.

Feltman stresses that there are no ready-made templates in peacemaking.

“For any conflict situation, the outside help, outside facilitation needs to be from a party or person who has the ability to provide expertise, ideas and creativity, to help build trust. It may be someone from the UN or it may not be someone from the UN. But whichever person or group has the ability to influence the thinking of the parties to the conflict, they should be supported by others.”

“If competition is left unmanaged, I think we’re in big trouble” 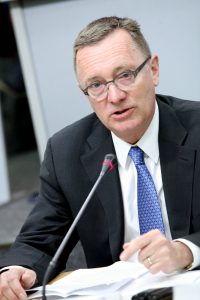 The rise of great power politics and populist nationalism is undermining international cooperation, and the UN as the main arena for it. This crisis of multilateralism has in many ways called into question the whole future of the world organisation.

Feltman thinks that the UN needs to go back to basics in these times of tense competition between states.

“The UN needs to become the mechanism for member state debate, trying to manage their conflicts peacefully rather than leaving everything to be unmanaged and unchecked.

“If the competition and inevitable friction is left unmanaged with no mechanism, I think we’re in big trouble.”

Feltman believes that the Security Council can still be used to find common ground on short-term peace and security issues.

“It’s the longer term challenges that I am much more worried about. Climate change looms large here.”