We live in peculiar times. International politics has gone back to the power politics of the Cold War, but within a more unstable and unpredictable framework. Is it possible for such a fragmented and rivalry-filled international system to respond effectively to the serious challenges facing the world? Or do we have to conclude that liberal democracy and globalisation were just a passing experiment lasting only a few decades? 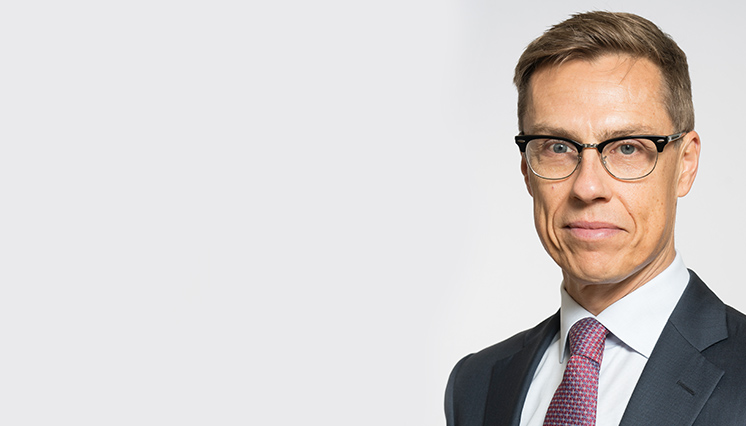 CMI’s Chair of the Board Alexander Stubb. Photo: Riku Isohella.

Here I want to take a short look at the current state of the world from the vantage point of three well-known years of upheaval: 1945, 1989 and 2016.

The first of these brought the end of the Second World War, the most devastating and murderous event in history. At the time the world was determined to ensure that such a calamity would never happen again. This led to the creation of the current multinational system and its most symbolic organisation, the United Nations. Ironically, it was also at this time that the Cold War was taking shape, dividing the world into two opposing ideological and political systems. The Cold War era was a global struggle for power between the United States-led free market economy and the authoritarian planned economic system led by the Soviet Union. This extended period of polarisation would last over 45 years.

It unravelled in 1989, a year that was indisputably one of the most hopeful of the last century. It saw the demolition of the Berlin Wall and the impending demise of the Cold War and of the Soviet Union itself. At the same time, the Baltic States were heading for independence and the countries of Europe were drawing closer to each other. This new, unipolar political era would be shaped by a single superpower and its allies across the Atlantic. The United States dominated the world in all areas of science, the arts, popular culture and the development of the arms industry and technology in general. As the Cold War ended, the American political scientist Francis Fukuyama wrote of “the end of history”, by which he meant that Western liberal democracy could be the endpoint of humanity’s political evolution.

Fast forward to 2016, and a major leap backwards. Suddenly the age of multilateralism was over and power politics were back in full force. As a result, the world was once again divided, this time between the United States, Russia and China. The concept of a unified Europe began to erode with Brexit and the rise of populist movements. Leaders in Hungary, Poland, Turkey, Russia and the United States set about rewriting the rules of representative democracy. There was open contempt for the role of the state, political parties, the media and institutions in general. Civil society and the free media were targeted by deliberate disruption – trolling – and the spreading of false and misleading information on scale. Amidst all this, the amount of violent conflicts have risen and credibility and influence of multinational organisations and the international treaty system have started to erode.

The world is very different today than it was just a few years ago. The liberal, rules-based international system that Europe and North America once cherished has gone. The big question is how can this politically messy and disunified international community deal with the challenges facing humanity, such as global warming, digitalisation, hybrid threats, refugee crises, and highly complex violent conflicts. Such large problems can only be solved through cooperation aimed at creating an outward-looking global system based on inclusiveness, cooperation and mutual understanding. How about re-energising the multilateral system – the wheel does not need to be reinvented. But is there the skill for this, or more importantly the collective will?

I have been Chair of CMI’s board since autumn 2017. CMI’s vision is based on the wise and optimistic conviction of its founder, Nobel Peace Prize laureate and former President of Finland Martti Ahtisaari, that all conflicts can be resolved. His worldview, which continues to guide CMI, is deeply rooted in a belief in equality between all people and equal treatment in all situations, including in situations where official, diplomatic channels are not enough. Face-to-face dialogue and cooperation can work miracles. CMI will continue to uphold the virtues that always characterised Martti Ahtisaari’s principled and highly successful approach to peace mediation: absolutely fair, equal and respectful treatment of all, with a sincere effort to listen carefully and to understand all sides. It is these same virtues that are most needed today – by the whole world.

Alexander Stubb, Chair of the Board