CMI’s Peace Innovation Challenge has fostered a variety of innovative ideas on conflict resolution in Ukraine. The winning project aims to create a networking café where local residents and internally displaced people (IDPs) can interact to find common ground. “The award we received shows the huge peace potential that IDPs have for the whole country”, said Irina Gladka. 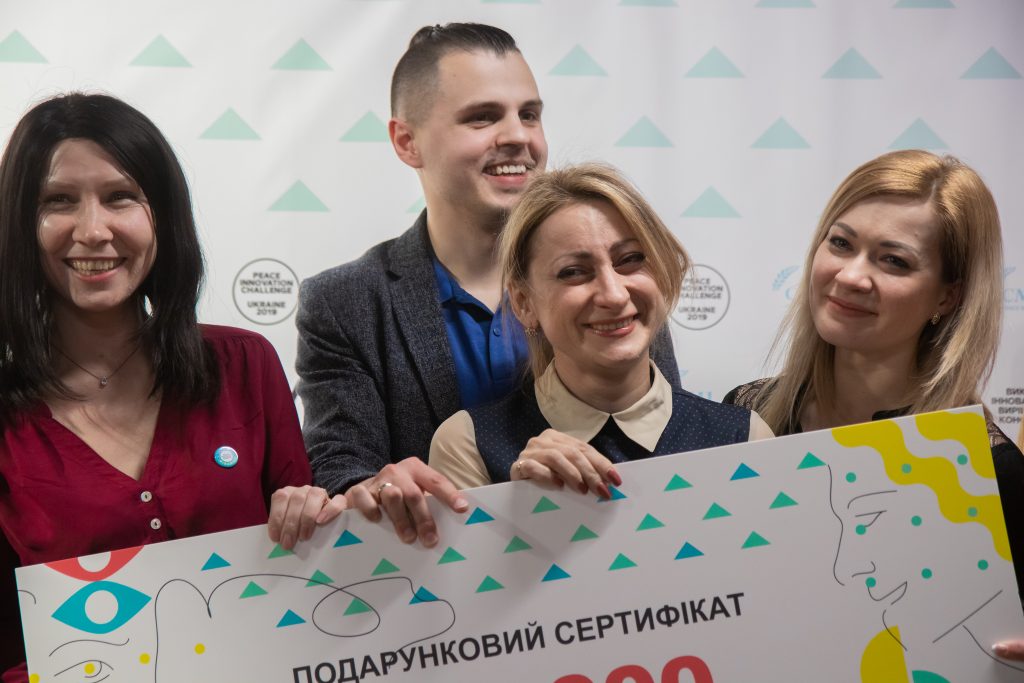 On 22 February, Gladka and her team won CMI’s Peace Innovation Challenge in Ukraine. They were awarded 10 000 US dollars to spend on their project, the “Networking Café Garage” in the city of Zhytomir in Central Ukraine. The idea is to create a space where local residents and IDPs can meet and engage in different activities together. Besides being a literal café, the space will facilitate coworking, various training courses, and exhibitions.

The project seeks to tackle one of the most pressing problems in Ukraine today. The lack of integration of people displaced by the war into their new host communities is a potential source of division and tension. It is unclear when the majority of the roughly 1,5 million IDPs will be able to return home.

The new space for bringing locals and IDPs together aims at reducing the stigma that IDPs experience. The project will help IDPs contribute positively to their host communities and become active members of them.

“The award we received shows the huge peace potential that IDPs have for the whole country”, Gladka says. 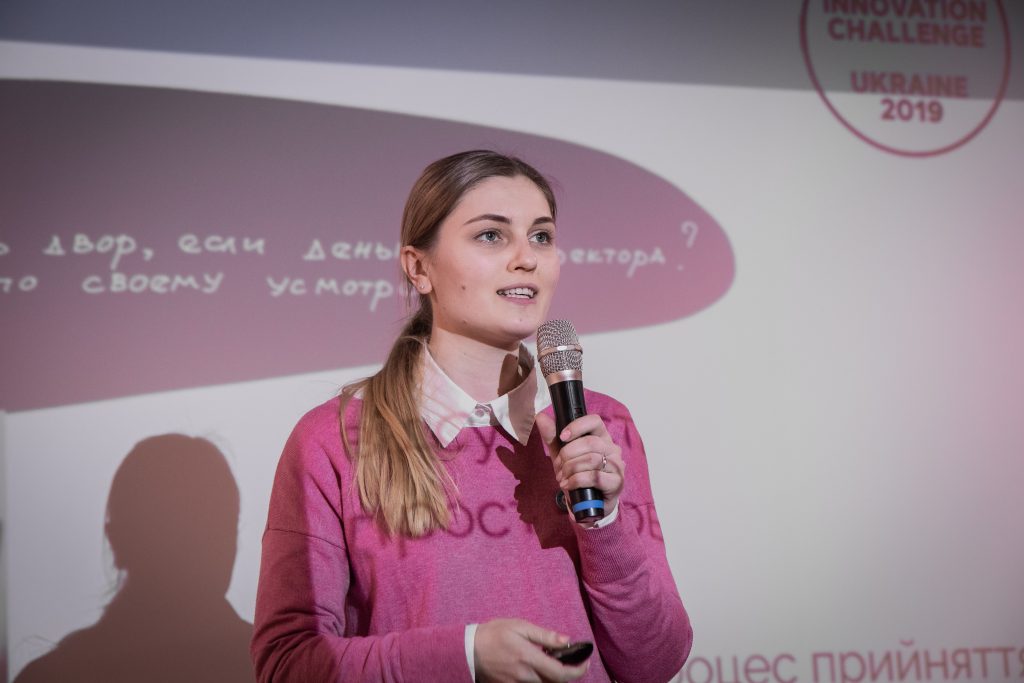 Iryna Yakovchuk presented a table game that would help people to meet each other.

“When official processes are stuck, ordinary people can bring about change”

CMI’s goal with the Peace Innovation Challenge was to encourage and inspire people to develop new approaches to conflict resolution in Ukrainian society. These approaches would need to enable broad participation by society.  Specifically, we were looking for innovative, locally-driven, concrete ideas that bring new drive and energy to the conflict resolution efforts.

The challenge was launched in early December 2018. It was advertised widely on social media, resulting in 100 applications from across the country, with a good portion from the East of Ukraine. Eventually, nine teams were selected to the final.

The variety of innovative ideas was a positive surprise for us, with ideas ranging from the development of safe cities to cyber security, from building social enterprises to breaking stereotypes related to IDPs. Many of the projects aimed at offering solutions to key national problems.

“When official processes are stuck, ordinary people can bring about change”, CMI’s Executive Director Tuija Talvitie pointed out at the final of the competition. 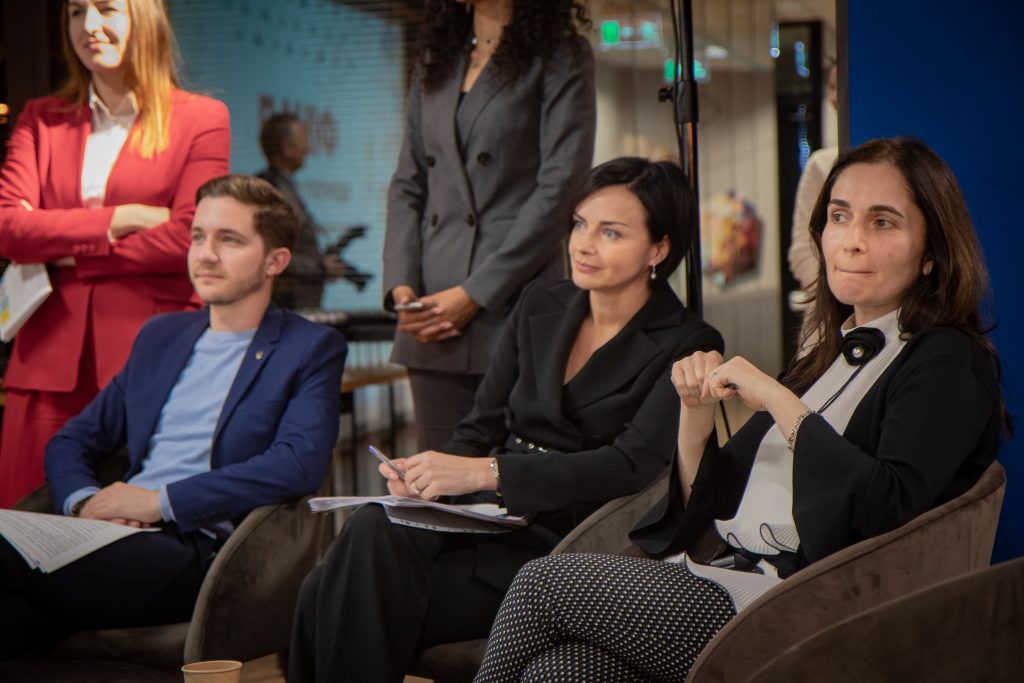 Tracking down manipulation on social media

The harmful effects of misinformation and the status of IDPs stood out as two key themes among the finalists.

The team “Security in Social Networks” proposed a project to scan different social media services in the south east of the country to expose how it is being manipulated to spread misinformation, and to reduce its destabilizing effects.

“The idea is to identify groups that are most vulnerable to misinformation. This information is then passed on to local civil society groups that could work with these vulnerable groups to change their attitudes”, explained Ilja Miroshkin, a team member and a project coordinator at the International Centre for Defence and Security.

The team “Strangers/Neighbours” wanted to show how deep-rooted the discrimination against IDPs is in Ukraine, drawing a parallel between the current movement of people and those who fled the Chernobyl nuclear disaster in 1986.

The idea was to create four social media advertisements that would debunk a specific stereotype attached to people belonging to these large waves of migration, and in this way reduce discrimination such stereotypes uphold. According to the team, the four main stereotypes are that migrants are toxic, that they are parasites, that they are criminals, and that they are traitors.

The videos would be targeted as young people as changemakers in the region of Ukraine’s second-largest city, Kharkiv. In the videos the stereotypes would be exaggerated and portrayed in an ironic manner. 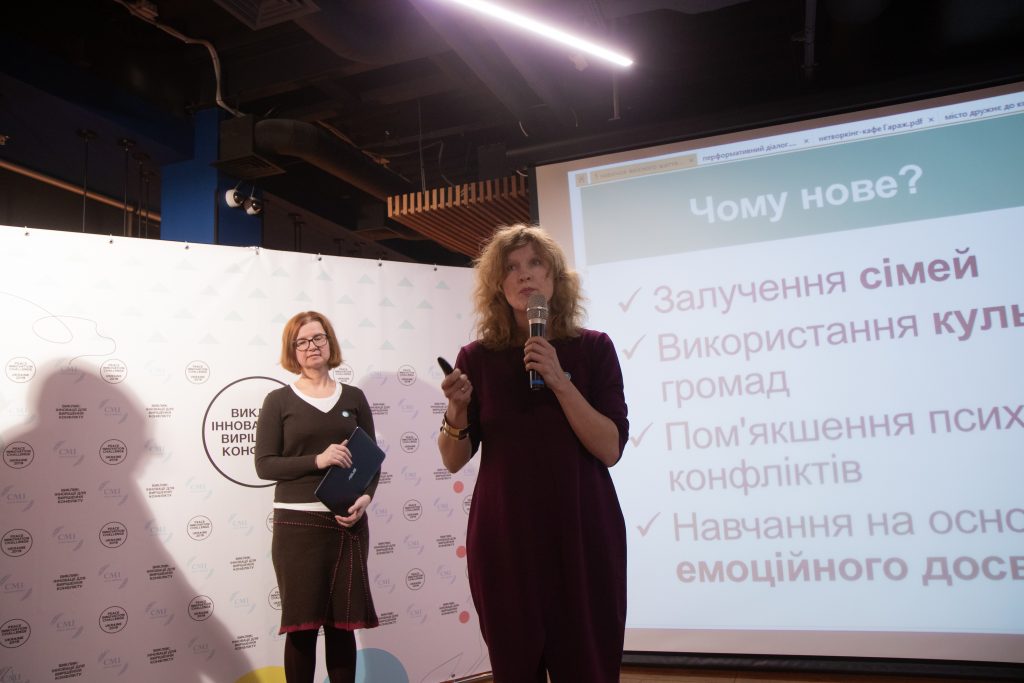 Svitlana Chunihina’s and Galyna Zyganenko’s project focused on the reintegration of soldiers into society. Both are psychologists.

Taking it to the next level

The members of Irina Gladka’s winning team are no strangers to these stereotypes. They all fled the war in the east of Ukraine in 2014, eventually starting a new life in Zhytomir.

To help other IDPs, they launched a civil society organization called “Peace in the Palm of Your Hand”. This now assists hundreds of people, helping with such things as finding work.

With the “Networking Café Garage” they hope to take their work to the next level. The first such café would only be a beginning.

“We hope to make it a franchise across the whole country”, said Gladka says.

To realize this dream, different civil society organisations would need to unite their forces behind the project, explained Gladka. This would then impel the authorities to listen to what they have to say.

The team admits that it is not always easy to get local residents and IDPs to come together.

“But people are interested if they see that the event or the activity is fun, interesting and stands out. Then they come, enjoy and come back the next time”, said Gladka.

Ihor Baranov, another team member, said that many of the prejudices on the IDPs are imposed by biased media or politicians.

He recalled how he started working as a teacher at a local high school when he first arrived in Zhytomir. For years, no one even guessed he was an IDP.

“I believe we can live in harmony side by side. We’re equal citizens of the same country or the same city. It doesn’t matter where we come from, east or west. It’s the country or the city we live in that unites us.”