CMI’s Head of Eurasia, Roxana Cristescu, addressed the lack of understanding on the composition of peace processes in the South Caucasus when she recently spoke at an event organized by the European Policy Centre (EPC). According to Cristescu, the EU should focus more on linking together different stages of peace processes and healing relationships between people affected by the conflicts. 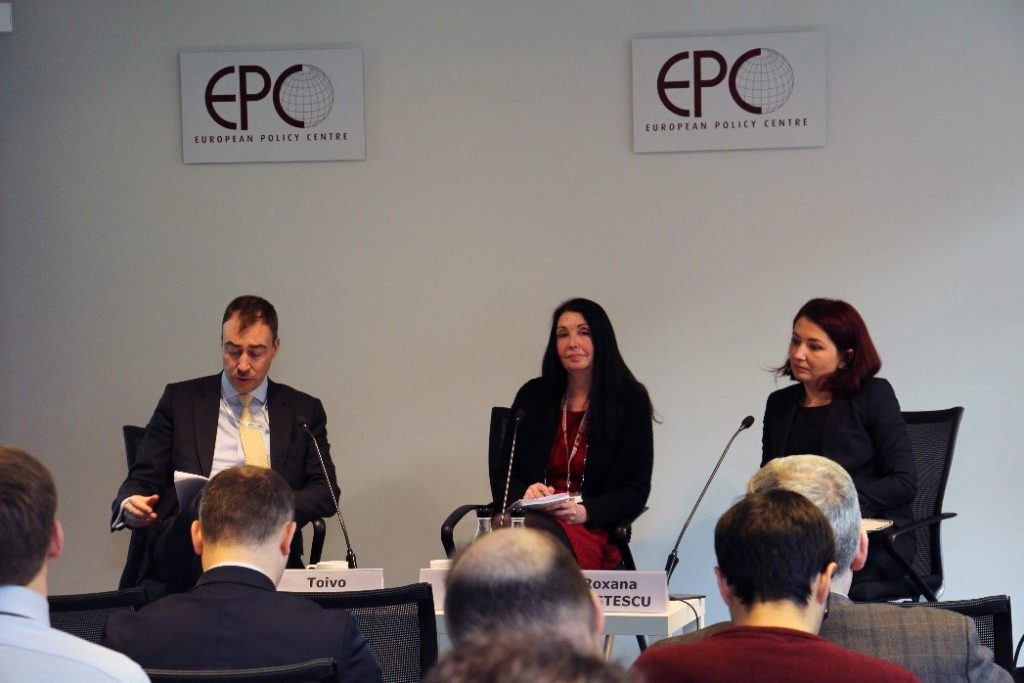 The panel held in Brussels was attended by European Union Special Representative for the South Caucasus and the crisis in Georgia, Toivo Klaar, EPC Senior Policy Analyst Amanda Paul and CMI Head of Eurasia Roxana Cristescu.

Twenty-five years after the break down of the Soviet Union, the South Caucasus is still searching for a peaceful solution for the conflicts involving Abkhazia, South Ossetia and Nagorno-Karabakh. Confining the societies to a status of “no peace, no war”, these tensions pose challenges to both the security and the overall development of the region.

The European Union is one of the key actors in the region and its role is defined by the different mandates for each conflict. In Georgia, the EU Special Representative, Toivo Klaar acts as one of the three Co-Chairs of the Geneva International Discussions (GID) together with colleagues from the OSCE and the UN. In the context of the Nagorno-Karabakh conflict, the EU is supporting the efforts led by the OSCE Minsk Group and by supporting confidence-building initiatives in the region.

Different stages of peace processes would need to be linked

Current peace talks and negotiations in the South Caucasus are shaped by ceasefire agreements they are built on, leading to several obstacles. According to Cristescu, there is a lack of understanding of peace processes. Different stages from ceasefire to peace talks and to implementation would need to be linked. These disconnections are one of the reasons why the imperfect ceasefires achieved in the South Caucasus have not led to meaningful political talks, Cristescu argued.

“There is a lack of clarity when it comes to understanding what conflict management, mediation or conflict transformation processes entail.  The absence of a shared definition and a poor awareness of the various limitations of third party mandates, leads to high expectations about what external actors can deliver in the protracted peace processes in the South Caucasus”, she summarised.

EU’s expertise can help in the implementation of peace agreements

The long-lasting negotiation processes in the South Caucasus are entangled with developments on the ground and at the regional level. These processes are not taking place in a vacuum. Cristescu said that the EU should in its conflict resolution and peacebuilding efforts concentrate more on mending relationships between people who are affected by these conflicts. This healing should lead from the point of conflict trauma to a shared vision of the future. Cristescu remarked that in the South Caucasus generations have grown in isolation during these negotiation processes. This has reinforced the ‘us versus them’ mentality and led to the lack of a shared vision for the future of the region.

Finally, Cristescu argued that a key element which is often forgotten is the implementation of agreements. Implementation needs to be carefully thought-through already at the stage of the negotiations and peace talks as they are often more difficult to deal with than the talks themselves. In this regard, the EU can play an important role by sharing expertise on implementation of peace agreements within the European Union and how issues such as restitution and return have been dealt with in other contexts.

Full report of the event can be found here.

CMI has been operating in the South Caucasus since 2005, facilitating dialogue platforms across the conflict divides and providing mediation support to conflict parties and international stakeholders. Since 2009, CMI is also one of the member of the European Partnership for the peaceful settlement of the conflict over Nagorno-Karabakh (EPNK).