Youth support reconciliation between Palestinians: “Our goal is to create a more democratic society”

CMI and its local partner Masarat are helping Palestinians to overcome years of division. Najla Abushalbak is one Palestinian who has learned to avoid being prejudiced. 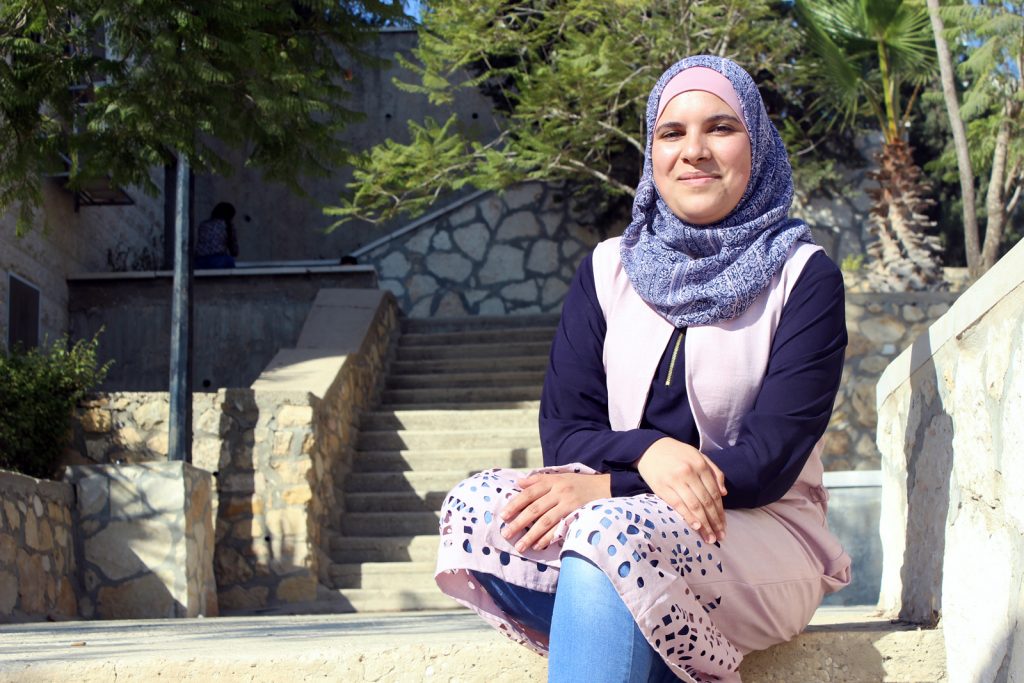 The youth group has helped Najla Abushalbak to become more skillful in making a difference politically. “For me, this group has been the first step in taking part in the things that matter.”

Not so long ago, 24-year-old Palestinian Najla Abushalbak could not imagine having friends from outside the West Bank where she lives. She had been blinded by the years of political division that has separated the Palestinians of the West Bank and Gaza. These divisions have diminished the chance for peace and prosperity.

Now Abushalbak has a dozen new friends from Gaza and the Palestinian diaspora. She talks to them daily through Skype, and she knows their families and the joys and sorrows of daily life.

“For me, there are no borders anymore.”

A decade of division

Abushalbak met her new friends in a youth group that helps Palestinians reconcile with each other. The group is affiliated with the so-called “Owners’ Committee”, which is supported by CMI and its Palestinian partner, the think-tank, Masarat.

The Owners’ Committee brings together a broad spectrum of Palestinians from the West Bank, Gaza and the diaspora. In addition to politicians, there are women, youth, civil society activists, and researchers. All of these groups feel excluded from Palestinian political life.

“The purpose is to create a more democratic, just and unified society. To achieve real reconciliation, the voices of all Palestinians must be heard,” describes Abushalbak.

Palestinians try to overcome the deep divisions that have ruled their lives for over a decade. In 2006, the militant Islamist organization Hamas won the Palestinian legislative elections. Fatah, the moderate Palestinian political party that was in power until then, refused to concede its loss to Hamas. A violent power struggle broke out between the two parties, resulting in hundreds of deaths.

The conflict ended with Hamas fighters taking over Gaza and removing Fatah from power. The West Bank was now governed by Fatah, and Gaza by Hamas.
Israel imposed a blockade on Gaza due to the Hamas takeover. Entering its eleventh year, the blockade has fractured the ties between the Gazans and the Palestinians of the West Bank.

Palestinians in the West Bank city of Nablus demonstrated against the siege of Gaza in 2015.

Keeping an open mind about others

The division between Palestinians is often sharpened by the confrontation between Hamas and Fatah, provoking Palestinians to demonise each other. For example, there are disagreements over the role of religion in society and how Palestinians should advance their cause vis-à-vis Israel.

The dialogue group have enabled Abushalbak to put herself into others’ shoes.

“I have learned not to have prejudices about others, even if they have different beliefs than I do. We may not be the same, but we can build a shared Palestinian ground between us.”

Abushalbak says politics has narrowed the frame through which Palestinians see each other. The group builds trust through face-to-face interactions.

“I can have a friend from Gaza who is with Hamas or with Fatah. The political affiliation doesn’t matter. We are all human beings. Big political discussions are important, but so are everyday concerns, whether these are related to family, the economy or education, or whatever.”

Gaza is now on the brink of a humanitarian crisis. Friends have told Abushalbak of how the lack of electricity and water is making life extremely difficult.

There is new hope that the political reconciliation is moving forward. In October, Hamas agreed on transferring administrative powers in Gaza to a coalition government. The deal promises to ease the conditions in Gaza.

Many previous agreements between the Palestinian factions have failed, but there is some optimism that this time it might be different.

“This is the first time all parties have the same interest and willingness to end the division,” says Fadwa Barghouti. Barghouti is a prominent Fatah figure and wife of the party’s imprisoned leader, Marwan Barghouti.

The explosive situation in Gaza makes it urgent to find agreement on a way out. Many important questions remain open, however.

Real national unity requires a solid political programme for the unity government, one that tackles the major problems and concerns of all Palestinians. This involves finding a way forward for Palestinians to gain their national rights, and addressing the economic and social problems, such as unemployment and lack of basic services.

Many Palestinians feel that the main political factions are unable to produce a new plan that revives the Palestinian cause and proposes measures for achieving peace and prosperity.

The youth have grown disillusioned with continued difficulties finding work. Najla Abushalbak has recently graduated from Birzeit University, but has not been able to secure a job. Only a few of her classmates have had any luck on the job market.

“There are jobs, but they seldom match your level of education.” 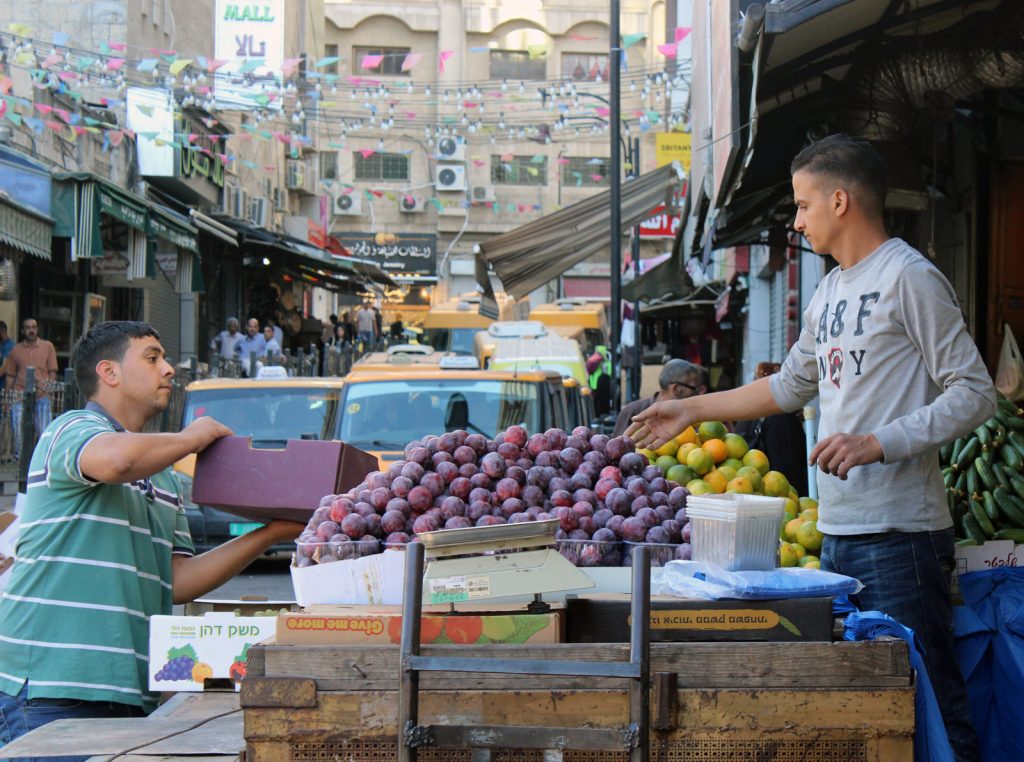 The building blocks for the reconciliation are presented in the National Unity Document. This gives voice to a wide spectrum of Palestinians, and the Owners’ Committee has also contributed much to it. The idea of using this document as a roadmap to unity has gained ground among Palestinian politicians.

The document calls for fundamental change in the way politics is done. Many Palestinians have few opportunities to participate in political life. Politics is essentially the exclusive domain of older men. This problem affects young people particularly strongly – and they form the majority of population.

In times of political deadlock and the absence of elections, the dialogue group itself has been a rare opportunity for many Palestinians to meet and discuss with politicians in person.

“The process itself has been a model to promote democratic participation in a situation where Palestinians don’t have other ways to exercise control over the things that affect them,” says Sultan Yasin, CMI’s project coordinator in Palestine.

“It has been the first time that many Palestinians realise that they have a chance to influence political decision-making,” continues Yasin.

According to Abushalbak, the group has helped her to become more skillful in making a difference politically. For instance, together with four group members from other regions Abushalbak has written a policy paper advocating for the rights of Palestinian detainees in Israeli prisons. The aim of Abushalbak and her co-authors is to contribute to putting pressure on the Fatah-led Palestinian Authority to demand better treatment for the prisoners and better recognition of their rights.

“For me, this group has been the first step in taking part in the things that matter. Now I can say and do things that I was afraid or unable to say or do before.”

“Politicians think we are too young to say anything. With this group, we can raise our voice more than before.”