New dialogue eases tensions in Moldova: “This is a breakthrough”

New cooperation between legislators has helped ease tensions in Moldova. The improvement in center-autonomy relations highlights the importance of settling disputes before they grow into open conflicts.

Spring has arrived in Gagauzia.

In downtown Comrat, the heart of the autonomous region of Moldova, the sun illuminates the Orthodox Cathedral of St. John the Baptist, making its domes and walls shine in copper and yellow.

In the playground, kids scream with joy as swings throw their feet towards the sky.
Gheorghii Leichu sits on the nearby bench to enjoy his lunch break. Leichu is a member of the Gagauz People’s Assembly. He is also co-chair of the Working Group that, with the help of CMI, tries to improve relations between the autonomy and the Government of Moldova, which is based in the capital, Chisinau.

Although the spring puts Leichu in a good mood, he also has another reason to be satisfied. After a long period of disputes, relations between Comrat and Chisinau show signs of improvement. 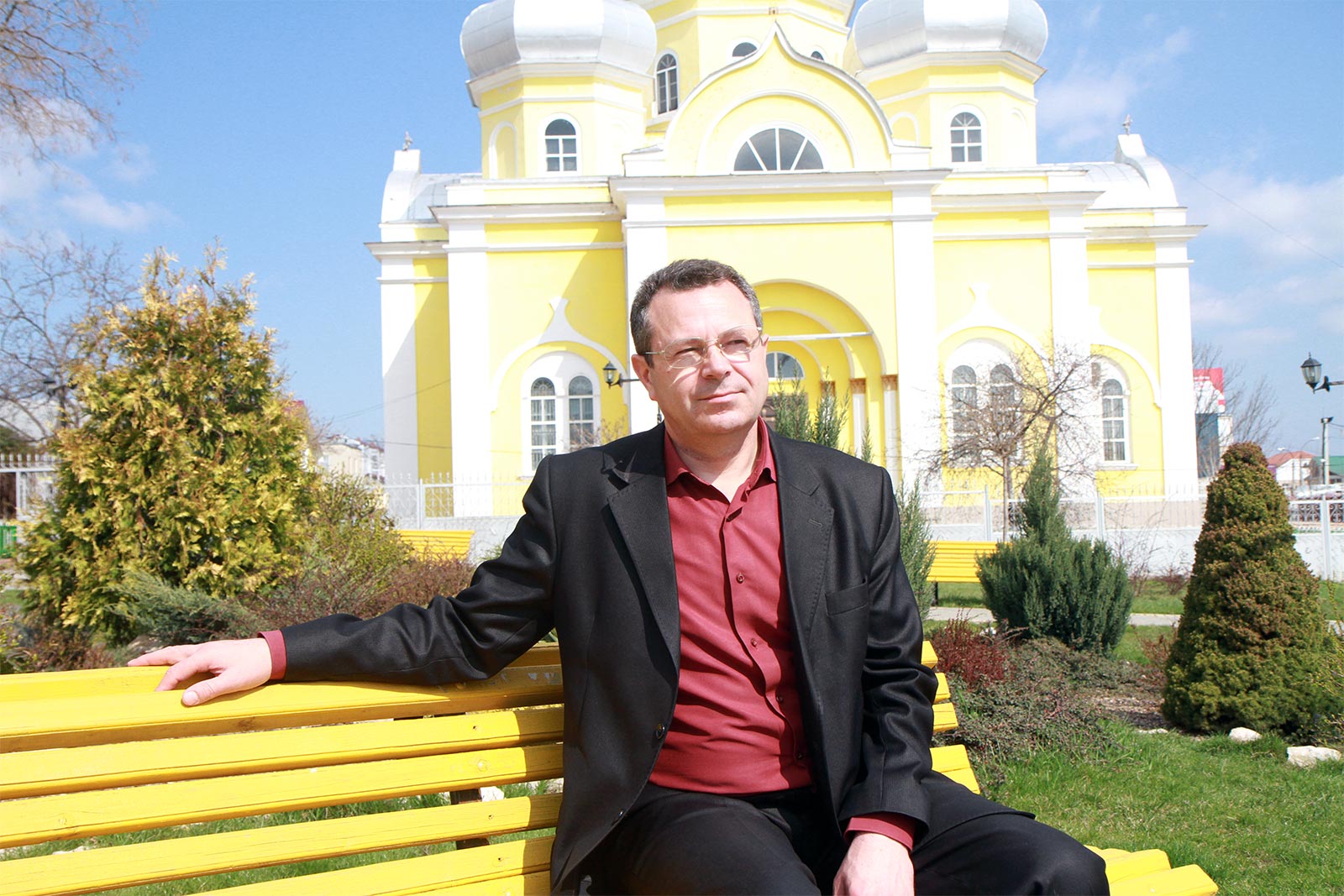 Gheorghii Leichu is a Member of the Gagauz People’s Assembly and Co-Chair of the Official Working Group. He feels that relations between the centre and autonomy are now improving.

As Moldova gained its independence from the Soviet Union in the early 1990s, the question of rights of the Gagauz minority rose to the surface. In 1994, the Government of Moldova established the autonomous region to safeguard these rights.

The autonomy is rooted in the law on the Special Legal Status of Gagauzia. It proclaims the People’s Assembly as the representative of the population and the main guardian of their rights, being able to pass normative acts and local laws.

However, being very general, the law provides little guidance on where the rights start and where they end. During the almost quarter-century of autonomy, this has led to many disagreements between Chisinau and Comrat.

Moldova lies at the crossroads between East and West. As world and regional politics have entered a new phase of tension in recent years, there has been new willingness from Chisinau to engage in dialogue with Comrat. 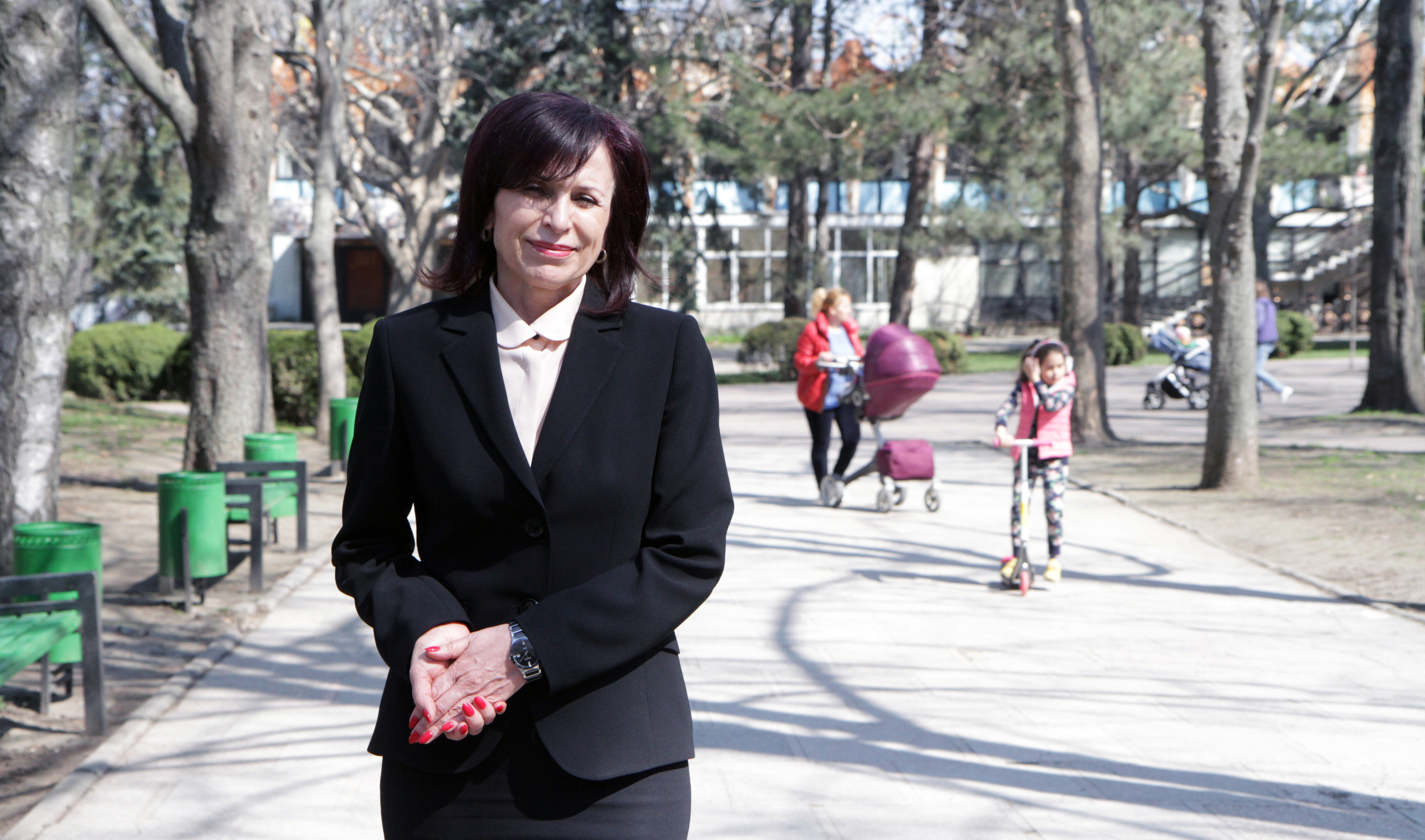 Elena Bacalu is a Member of Parliament of Moldova and Co-Chair of the Official Working Group. “In the group, we do our best to make things right in the autonomous region.”

“I would call this a breakthrough”

In the summer of 2015, CMI, with funding from Sweden, convened legislators from both sides to set up an informal working group to improve the functioning of the autonomy. As a gesture of confidence and following increased attention from international partners to the issue, Moldovan Parliament then initiated and established an official working group involving the Moldovan Parliament and the People’s Assembly.

With CMI’s support, the inter-parliamentary work has played a vital role in improving in Chisinau-Comrat relations. The official working group is the first permanent group on autonomy issues at the parliamentary level that has become sustainable.

There’s increased trust between the group members, and they are more able than before to find solutions to disagreements. Opportunities for fruitful compromise have improved, since both sides have learned to take the other’s perspective.

The increased capacity of the two parties to reach consensus has resulted in a number of concrete solutions. For example, the working group has endorsed the much-needed harmonization of national and local legislation, and is currently working to develop a roadmap to carry through these changes. And concrete measures have been taken to improve the implementation of autonomy’s rights and the livelihoods of local people.

“I would call this work a breakthrough. Cooperation is taking shape. This group has great potential to achieve good results”, says Leichu, the Co-Chair of the Official Working Group.

Leichu has long experience in the public of life of the autonomous region. Previously he was Prosecutor of Gagauzia, for over ten years. In 2016, he was elected to the People’s Assembly for the second time, as an independent candidate.

In Chisinau, Leichu’s positive feelings are shared By Elena Bacalu, his Co-Chair. As a Member of Parliament, Bacalu represents the ruling Democratic Party. Bacalu considers the group’s work exceptional.

In the beginning, the legislators weren’t even able to communicate with each other. Voices were raised.

“Now I realise that I have become more moderate myself, too. I couldn’t imagine this happening,” Bacalu says.

She sees a real momentum to the improvement in relations.

“In the group, we do our best to make things right in the autonomous region. And I know that the leadership in Chisinau is also interested in solving this problem.” 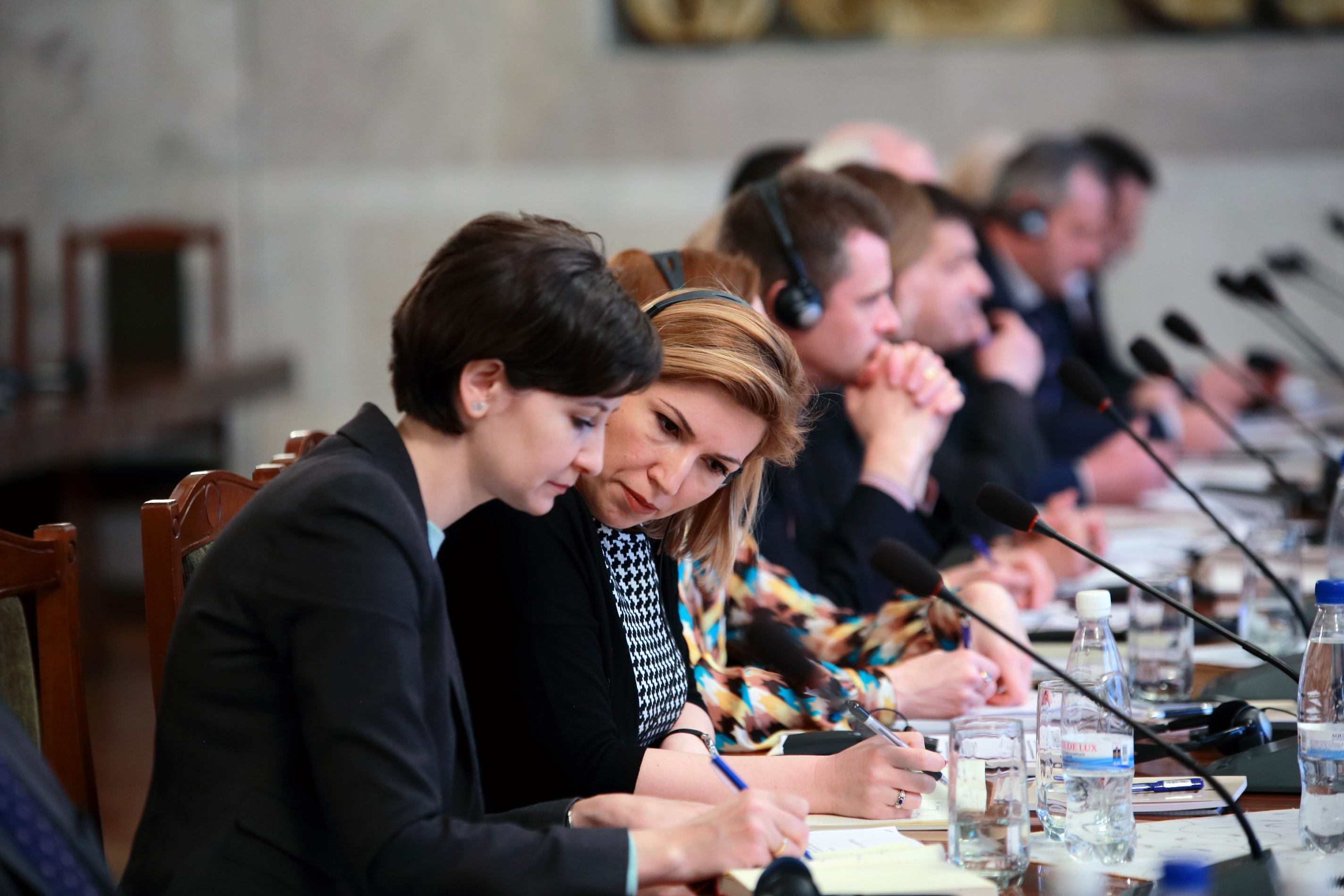 CMI’s Natalia Djandjgava (left) and Jale Sultanli at the first joint meeting of the Parliament of Moldova and Gagauzia People’s Assembly on 4 February 2016 in Chisinau. Photo: Parliament of the Republic of Moldova.

CMI: the missing piece of the puzzle

The parliamentary dialogue in Moldova is an encouraging example of conflict prevention. It establishes a mechanism to settle disputes before they can escalate into open conflict. In 2016, the working group became a platform where disagreements between Chisinau and Comrat were often sent.

The ability to take early action also has clear benefits for conflicts that are already heated. There’s more space to tackle the underlying causes of tensions, and to find common ground between the parties.

The complexity of today’s conflicts means that it sometimes takes very little to trigger a crisis. This highlights the need to tackle a problem before it becomes major. Considering the possible consequences of escalation, effective conflict prevention clearly saves time and money compared to remedial measures.

New UN Secretary-General António Guterres has put conflict prevention high on his agenda. According to Guterres, the world has spent far more time and resources on responding to crises rather than preventing them. Because conflict prevention can raise concerns about national sovereignty, impartial private diplomacy actors like CMI are well positioned to do the work.

In Moldova, both sides feel that CMI’s involvement and the support from Sweden to the process have made an important contribution.

According to Andrian Candu, Speaker of the Parliament in Chisinau, CMI has been the missing piece of the puzzle.

“Many of the disagreements over legislation have been political in nature. CMI has brought mediation expertise to the table, which has increased our capacity to look at things constructively,” he says.

CMI has become a trusted partner both in Chisinau and Comrat. CMI supports the official working group by informally convening its members, assisting in shaping its agenda, brokering agreements on discussed issues and channelling support from other government institutions.

“We’ve never had a mediator between us before, someone neutral who’s interested only in reaching solutions and achieving results. Before it was only the two sides meeting,” says Leichu.

However, the cooperative effort is strongly in the hands of both sides. The process couldn’t have gone this far without the strong commitment from Chisinau. This strong local ownership of the process makes it far more likely to succeed, and to be sustainable.

“All parliamentary political parties are involved in this process. The engagement from both sides really highlights the importance of this dialogue,” Speaker Candu says.

A plan to improve quality of life

The high-profile parliamentary dialogue has created a more positive political environment and resulted in a number of concrete measures that would improve the quality of life in Gagauzia. In October 2016, the Government of Moldova adopted a four-year action plan for the socio-economic development of the autonomous region.

As the South is one of the poorest regions in Moldova, farmers on horse-drawn wagons are a familiar sight in the countryside. Lada cars, decades past their peak, rattle along the streets of Comrat with shiny SUVs.

Both Chisinau and Comrat consider the establishment of the Agency for Regional Development to be the main achievement of the action plan. Among the things that the Agency’s funds enable are road building. Infrastructure projects would bring jobs and some much-needed vigour to the local economy.

“Our voices have finally been heard,” Leichu says.

Both sides welcome the reinforcement of learning of the state language, Romanian. There would be three different language groups in kindergartens: Romanian, Gagauz and Russian. Local authorities would be introduced with language courses in Romanian. 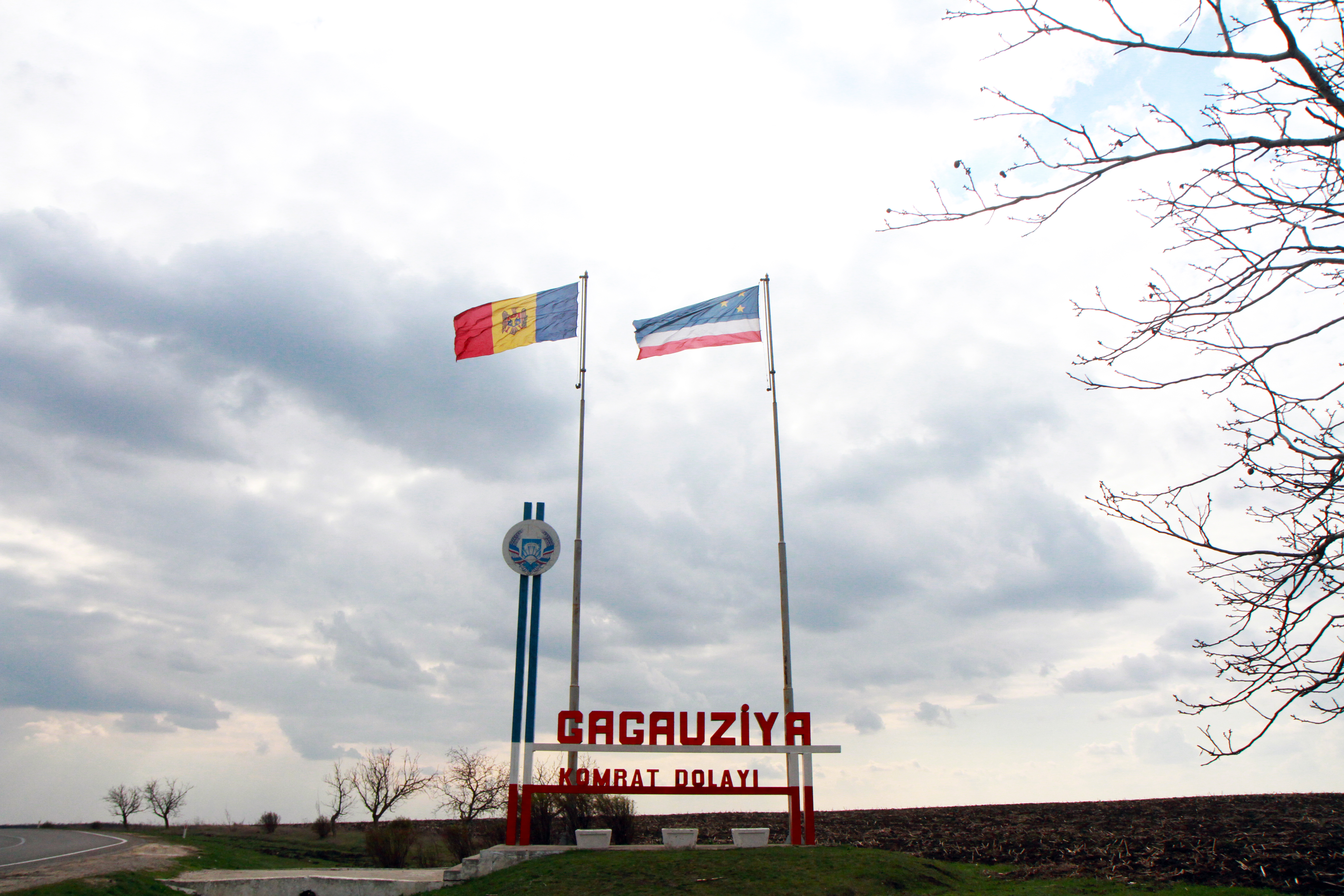 Moldovan and Gagauz flags fly at the border of the autonomous region of Gagauzia.

Even though the cooperation is still in its early days, legislators in Chisinau and Comrat are optimistic about the future.

The members of the working group have realised that the dialogue is a long-term process that needs to go on. Both Bacalu and Leichu hope that there will eventually be a permanent platform for resolving disputes between Chisinau and Comrat. This would also help to deal with the more difficult questions that might surface.

For parliamentarians involved in the process, this work is an encouraging example that finding solutions and change through dialogue is possible.

The sunny spring weather also makes itself felt in Chisinau’s central park. Sitting on a park bench, Elena Bacalu smiles at a little girl who passes her on a tricycle.

“I think we’re moving in the right direction. We’re doing this for the best of the Gagauz people.”