“I called all my children to lay down their arms”

Catherine Samba-Panza brought the Central African Republic back from the brink of collapse. It wouldn’t have been possible without being the mother of the nation, she says. 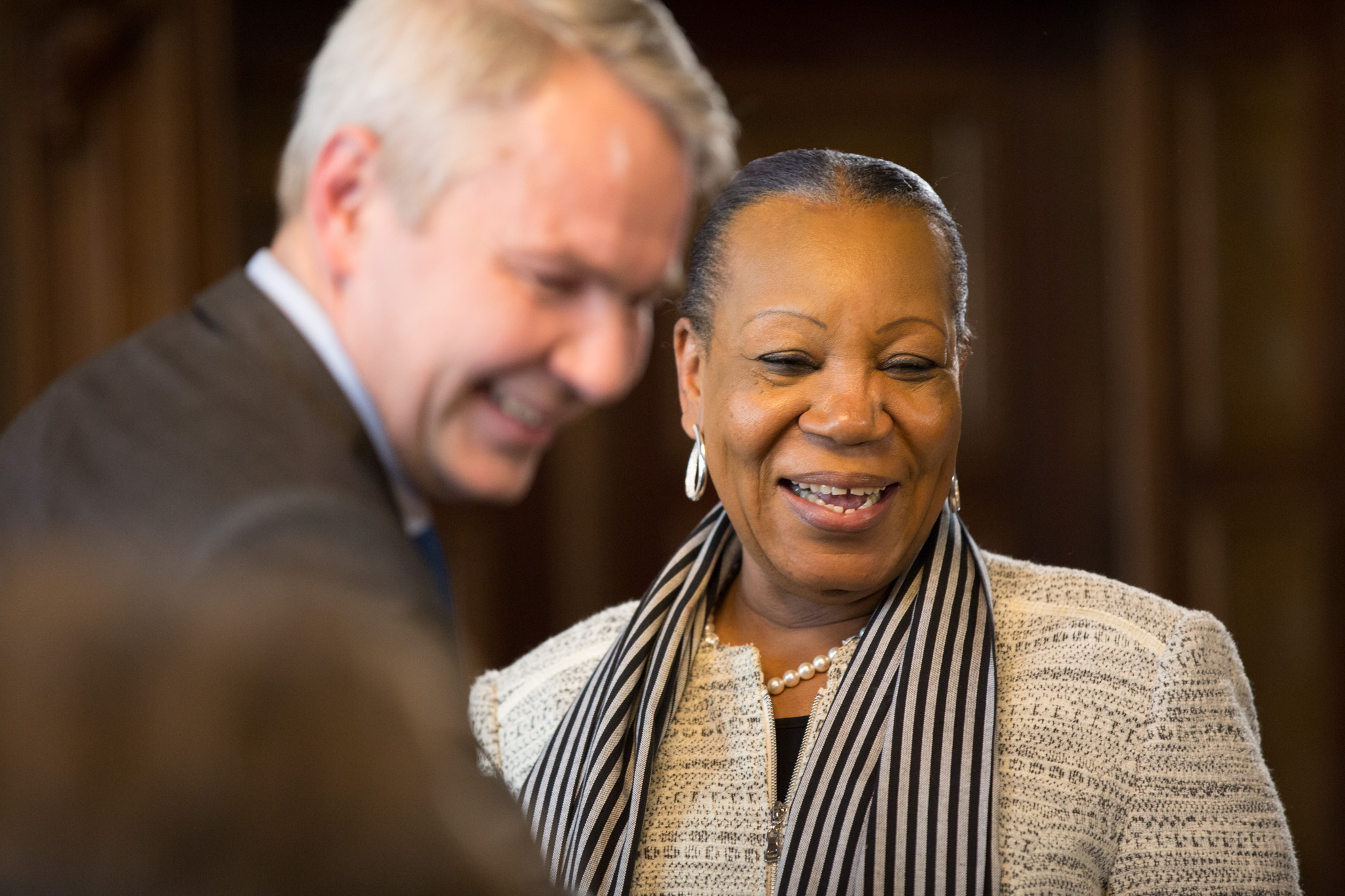 Phone calls and emails. People grapping her by the sleeve on the street.

Catherine Samba-Panza had never imagined herself a politician. But the despair of her compatriots changed her mind.

In 2013, the civil war had brought the Central African Republic to the brink of collapse. The Séléka rebels, from the Muslim majority, had overthrown president François Bozizé, who fled the country.

Bloodshed intensified between the Séléka and the Anti-balaka militias, from the Christian majority. As religion was instrumentalised for political reasons, the fighting also turned ordinary people from the two communities against each other.

It was women in particular who called for Samba-Panza’s help, since they felt men and their fighting had once again brought nothing but misery to the country.

”Women had confidence in my leadership. I couldn’t stand by and do nothing while my country fell into chaos,” Samba-Panza recalled in an interview she gave while attending the National Dialogues Conference in Helsinki in April.

Her decision to take action would leave a historical mark on a long-suffering country.

Just two months after seizing power in the country, the new leaders appointed Samba-Panza as the Mayor of Bangui, the capital. The two parties to the conflict accepted the appointment; despite being Christian, Samba-Panza was considered politically neutral.

Even though the people of Bangui didn’t have a say in Samba-Panza’s election, when was widely popular there. It was as if a fresh breeze had blown through the country’s politics.

Having previously led an insurance firm, Samba-Panza was a stranger to the corrupt circles of the country’s political elite. As a civil society activist, she had built a reputation for working in the best interests of ordinary people. She was especially renowned for her ability to build bridges between different communities, and for fighting for a more just society by promoting women’s rights.

The Central African Republic needed reconciliation more than ever, and Samba-Panza seemed perfect for the task. Soon the good work she did brought her the nickname “courageous mayor”. It was the prelude to the highest political office in the country. 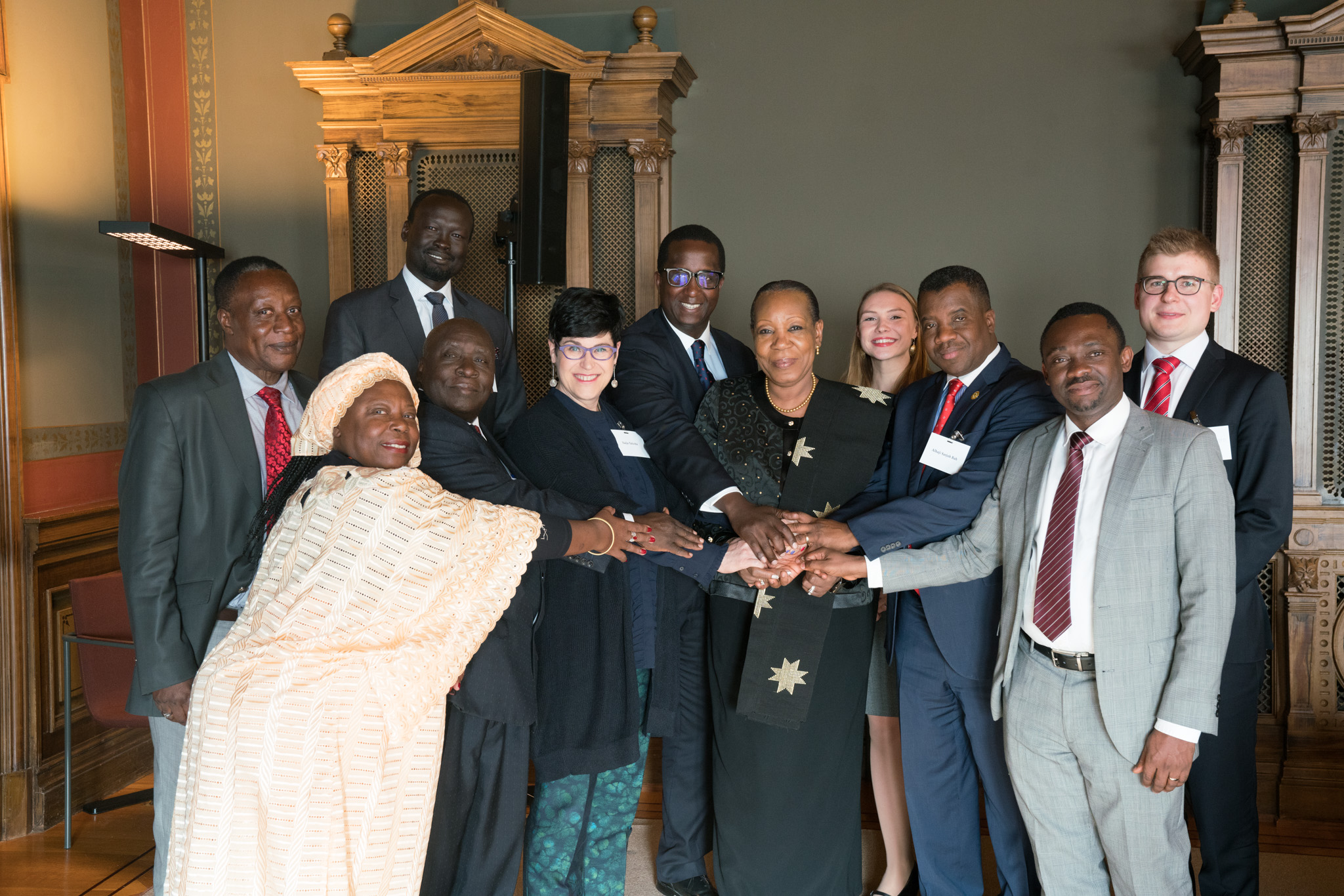 Participants of the conference joined their hands for a group photo.

“A female leader would be less violent, less aggressive, less hungry for power”

In January 2014, Samba-Panza succeeded the Séléka leader, Michel Djotodia, as the country’s interim president. Djotodia was forced to step down under international pressure over his failure to end the bloodshed.

Samba-Panza became the first female president of her country, and one of the few on the continent. Women were overjoyed, both on the streets of Bangui and in the parliament that had elected her. Her gender was decisive to her political rise, Samba-Panza says.

“Women of the country said: We have had enough of hostilities between men. A female leader would be less violent, less aggressive, less hungry for power,” says Samba-Panza.

In this respect, many Central Africans feel that a woman, and above all a mother, is best placed to bring reconciliation. Women fight for peace, Samba-Panza says, because of their intimate experience of giving life. They don’t want to see that life taken away over and over again as their sons are killed.

From the very beginning, Samba-Panza positioned herself as the mother of the nation.

“I called all my children to lay down their arms and unite. I said that I bring hope, because I give life.”

Samba-Panza says that many in the country would agree that she wouldn’t have been able to achieve the results she did without adopting her maternal role.

“If I had acted like a head of state, that would have never worked”, Samba-Panza reflects.

A country back from the brink of collapse

Under Samba-Panza’s leadership, the country found hope. The restoration of adequate security, with the help of the international community, was essential to overall progress.

Samba-Panza took a strong role in making sure that all voices were heard in the peace process. The popular consultations brought out grievances from much of the country. A high proportion of women and youth joined these consultations. The recommendations of the subsequent Bangui Forum ranged from ending the impunity for violence, through reinforcing reconciliation, to investment in infrastructure, education, and health.

In 2015-2016 the country held free, peaceful and democratic presidential and legislative elections, bringing the three-year transition to an end. In March 2016, Samba-Panza ceded the presidency to Faustin Archange Touadera, the former Prime Minister. 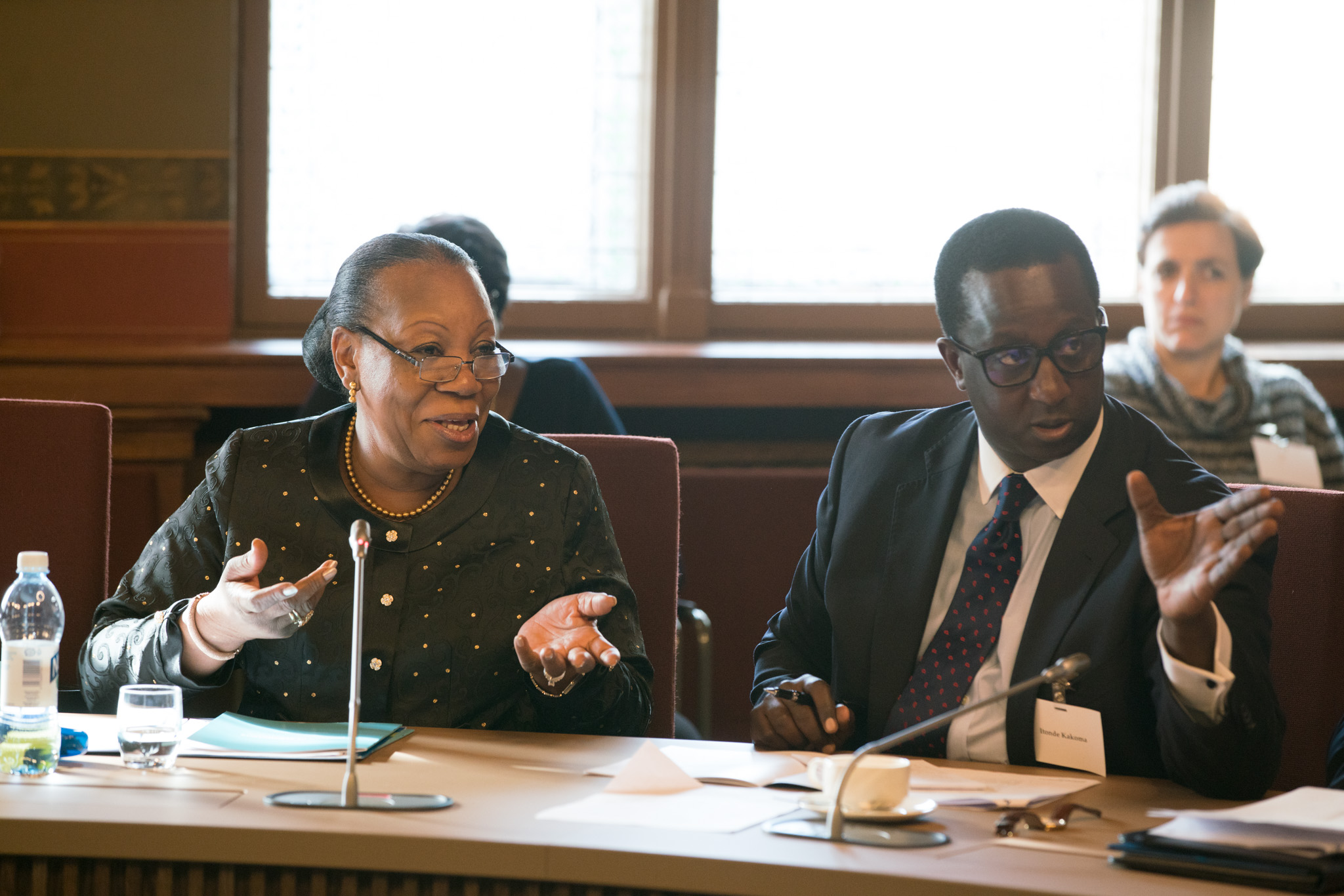 Samba-Panza with Itonde Kakoma, the Head of Sub-Saharan Africa at CMI.

Samba-Panza is a source of inspiration

Despite the progress of the transition period, the situation remains precarious. Much of the country is still in the hands of the armed groups, and persistent instability creates food insecurity.

Many feel that the promises to meet the basic needs of the population have mostly led nowhere. Samba-Panza feels partly responsible for this, as her administration failed to reduce poverty. However, she criticizes the current government for not engaging in real dialogue with the ordinary people.

“People feel that we don’t listen to them. They get frustrated and take up arms.”

Since leaving office, Samba-Panza has advised the government in various matters, such as peace mediation and leadership. She still has much to contribute to civil society, she says, particularly in the promotion of women’s rights.

Samba-Panza has become increasingly aware of the need for female involvement in shaping the country’s future. She feels that the current, male-led government squanders the potential of women to do politics differently, and to tackle the problems of ordinary people. One sign of this is that there are now fewer women in political positions than during her presidency.

Still, Samba-Panza’s work is an encouraging example of what women can achieve.

“I still receive messages from the young men who gave up arms. They say: thank you for what you did for us.”