How we increase the chances of lasting peace?

If you want to increase the chances of sustainable peace, make sure those closest to the crisis lead the conlict resolution. Our new study highlights the importance of the principle of subsidiarity in the African context.

The principle of subsidiarity is founded on the idea that sustainable peace is more possible if conflict resolution efforts are led by actors who are culturally, geopolitically and/or strategically close to the crisis in question.

The idea of subsidiarity can be illustrated with a simple analogy.

”If a house in a village is on fire, it’s of great interest to the neighbors to ensure that the fire is extinguished rapidly and doesn’t spread”, explains Itonde Kakoma, the Head of Sub-Saharan Africa at CMI.

Being close to the crisis, the neighbors have better awareness of local sensitivities and greater legitimacy. Ultimately, effective operationalization of the principle of subsidiarity increases the probability of sustainable peace, Kakoma says.

In the African context, subsidiarity means that the mediation of a crisis should be supported, and where appropriate, led by Regional Economic Communities (RECs). According to Kakoma, the engagement of regional organizations is at the core of the efforts to provide “African solutions to African problems” in conflict prevention and resolution.

“The principle of subsidiarity highlights African ownership. But it also points to the fact that African states are the ones that will have to live with the outcome if the crisis is not properly solved.”

ECCAS took the leading role in resolving the crisis in 2012 when renewed tensions arose in the country.  CMI provided assistance to ECCAS’ mediation expertise through capacity building, logistical support and human resources.

A key observation of the study highlights the need for sufficient independence of REC secreteriats while balancing inherent regional member state interests. 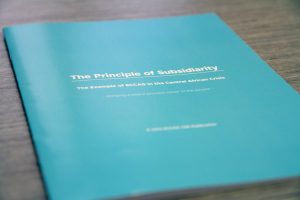 The study builds on the fruitful collaboration between ECCAS and CMI.

More recently, the principle of subsidiarity was tested in the Gambian crisis.

Gambia was thrown into chaos when the autocratic president, Yahia Jammeh, refused to step down. After weeks of uncertainty, the Economic Community of West African States (ECOWAS) managed to convince Jammeh to give up power.

The resolution of the conflict emphasizes ECOWAS’ determination to extinguish a crisis before it spreads, Kakoma says.

“ECOWAS sets a high standard for upholding democratic values not only in Africa but globally.”

The study is available here in both English and French.