As the war in Yemen enters its ninth month, Yemeni actors from across the political spectrum issue joint proposals to advance conflict resolution efforts.

Two informal Yemeni groups have formulated inclusive proposals with the aim of supporting efforts to resolve the ongoing conflict. Since its escalation in March 2015, the war has resulted in over 32,000 casualties, caused widespread destruction on basic infrastructure and left over 21 million people in need of humanitarian assistance.

The recommendations have been developed in a series of meetings convened by CMI in Sana’a in September-November. The Istanbul Forum for Dialogue (IFD), a group bringing together influential actors from across the political spectrum, calls on all political entities “to end the war in all its manifestations” and resume a dialogue involving all key components of the society. The urgent need for mutual engagement is also called for in the recommendations of the Women’s Forum for Dialogue and Peace (WFDP), comprised of prominent women from diverse political and geographical backgrounds.

The war has exacerbated internal rifts and led to increasing fragmentation of the society. Yet, there is a strong belief that the various components are able to bridge the divisions and find a political solution to the conflict. Both forums highlight the agreements Yemenis have reached in the past, including the recommendations of the National Dialogue Conference that convened over 500 participants from various segments of the society to craft solutions to key national issues in March 2013-January 2014.

In addition to previous agreements among Yemeni groups, the forums see relevant United Nations Security Council Resolutions as a potential basis for future negotiations. The WFD places particular emphasis on the “the need to include women in conflict resolution processes at all levels” in line with the UNSCR 1325 on women, peace and security and the commitment of the NDC to ensure women’s participation in key decision-making processes.

Among the suggested steps to build a conducive environment for a political process is an announcement by all groups on their willingness to engage in “serious, responsible and direct talks”. As regards the issues that are critical to address in any future talks, the forums mention determining the roles of governance bodies, the humanitarian situation as well as deciding on “the necessary and sufficient guarantees for the implementation” of any agreements reached in the negotiations.

Supporting inclusiveness at all levels

The Istanbul Forum for Dialogue has been working to support inclusive political transition and conflict resolution efforts in Yemen since 2011. The informal dialogue forum has undertaken efforts to enhance confidence among different political and social components since the early days of the political transition as well as formulated joint proposals on key transition issues with the aim of supporting the search for joint solutions in the formal political process.

The Women’s Forum for Dialogue and Peace has been cooperating since early 2013 to ensure women’s voices are heard in Yemen’s political transition and conflict resolution efforts at all levels. The members engaged actively in the National Dialogue Conference and, during the subsequent constitution-drafting period, undertook extensive efforts to have key issues for women incorporated in the new constitution. During the current conflict, members from both groups have supported local ceasefire efforts in selected governorates affected by intense fighting. 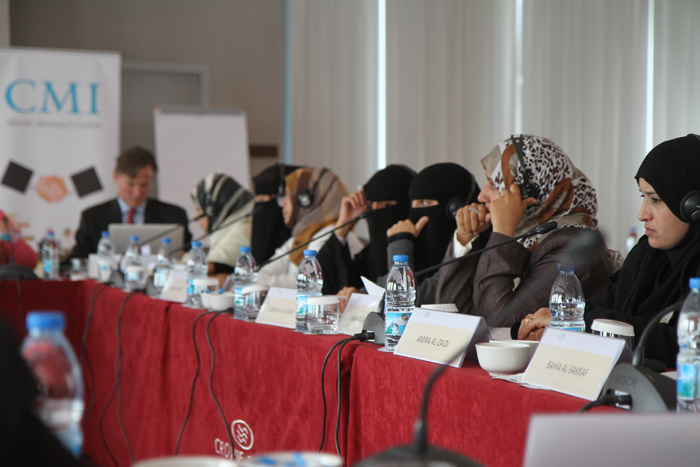 CMI has been supporting the Women’s Forum and the Istanbul Forum in their efforts to promote inclusive dialogue and conflict resolution in Yemen since 2011. In their newly published proposals, both forums call for Yemenis from across conflict divides to engage in dialogue with a view of developing joint solutions to the current crisis.