Margot Wallström: “All forces are needed for peace”

Sweden’s foreign minister Margot Wallström believes that gender equality fosters peaceful societies. At her request, she visited CMI in early 2015 to learn more about our work.

In 2013, minister Wallström attended the high-level seminar on gender and inclusion co-organised by CMI. She describes the practical field experiences shared during the days as invaluable.

Sweden, as well as Finland and the rest of world, is characterised by some form of discrimination against women and girls. Achieving gender equality is fundamentally a human rights issue. Human rights are also women’s rights.

There is also a clear link between a high level of gender equality, and peaceful and democratic societies. Therefore, gender equality is also a key issue for Swedish foreign and development policy – and I hope that many other foreign ministries will arrive at the same conclusion.

Why is the inclusion of women in foreign affairs so important?

The inclusion of women is necessary for making good policy. I believe in diversity, and half of the world’s population are women. Diversity is a precondition for high-quality decision-making. The opposite of this is ‘group think’ among a homogeneous set of people where no one challenges underlying assumptions, or represents a different perspective.

Luckily today there are many positive examples of women in leading positions. Perhaps the most powerful politician in Europe is Angela Merkel. Hillary Clinton is running for US president. Federica Mogherini is the EU’s high representative for foreign affairs and security policy, and Nkosazana Dlamini-Zuma is the AU commission’s chairperson, just to give a few examples.

However, women are still under-represented. One reason is historical path dependency. Foreign policy has for a long time been a traditionally male-dominated domain, closely linked to security and defence.

Another reason why women are under-represented in foreign policy may have to do with more generalised gender inequalities in societies, making it difficult for women to reach top positions. In the Swedish context, the abolition of joint taxation, together with publicly-financed day care and gender-neutral parental leave, have made it possible for women to have both professional careers and children. Not many other countries have implemented such progressive social reforms, though.

What led you to become such a strong advocate for women’s inclusion in the first place?

How could you not? Ever since I was very young, in my first ministerial post in the Swedish government at the end of the 1980s, I have been working on these issues. In my experience, women do not want to be victims, they want to be actors of change.

You have been vocal about the fact that more women should be included in peace processes. What added value do they bring?

Firstly, peace negotiations often set the entire direction of the post-conflict development and society. Obviously women should be represented in decision-making that will affect their own lives and future living conditions. In addition, women may bring different experiences, perspectives and styles to the table, which can add value both to the substance and the process of the talks. Lastly, existing evidence shows that peace agreements resulting from processes where women have been involved tend to be more long-lasting. 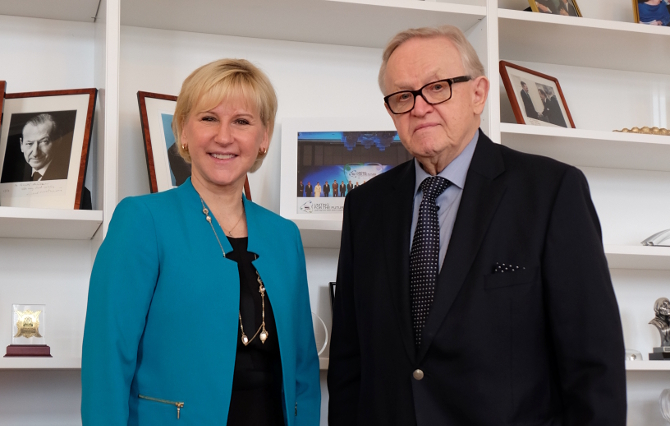 During her visit to CMI, minister Wallström met our chairman President Ahtisaari.

In early 2015, you visited CMI and learned about our work, particularly in promoting women’s participation in peacemaking. What do you see as the role of private diplomacy actors in supporting peace?

I believe in courage and patience in resolving crises and conflicts. Not just formal processes and official representatives play a decisive role. It is not something that happens automatically. It requires active and engaged leaders and individuals, as well as long-term commitment.

It was very interesting to learn about your work. There is a great need to raise issues related to gender and gender equality in international peacebuilding efforts. All good forces are needed in this work.

This article was first published as part of CMI’s Annual Report 2014-2015.