In relation to CMI’s work in North Africa and the Sahel, the United Nations Environmental Programme held a one-day intensive training on natural resource conflicts to CMI staff on 26 March 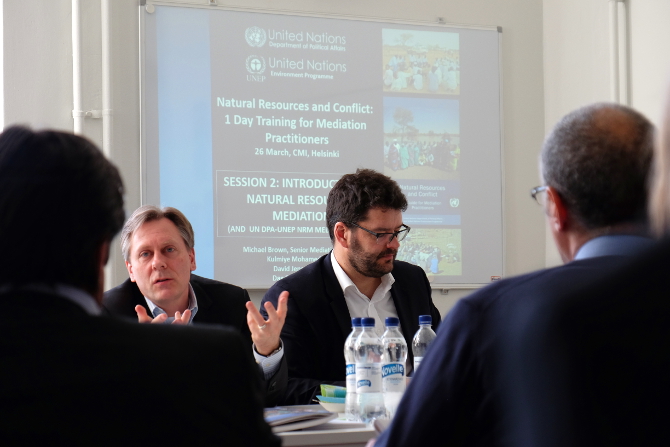 The reason is twofold: they’re both technically complex and politically sensitive.

“Technical people look at resource conflicts and say: ‘This is very sensitive politically, so we don’t know how to deal with it.’ And the political side says: ‘This is very important, but so technically complicated that we’re not going to bring this to the table”, explained Brown, a Professor of Practice in Conflict Mediation at McGill University. He’s one of the principal contributing authors of the new UN publication titled Natural Resources and Conflict: A Guide for Mediation Practitioners.

Brown visited the CMI headquarters in Helsinki along with David Jensen, Head of Environmental Cooperation for Peacebuilding programme of the UN Environment Programme (UNEP), and Dag Seierstad, who’s UNEP’s Environmental and Extractive’s Expert. They gave a comprehensive training to CMI staff, including members of the North Africa & Sahel team and the Eastern Europe, Caucasus and Central Asia team.

Technical details are often at the heart of the resource conflicts, and due to their complex nature they can be easily manipulated and whitewashed, Brown reminded the listeners. Resource disputes are often affected by wider supply chains that go beyond the geographical area of conflict. Economic, especially elite, interests are almost always in play.

On top of that, the land itself that produces the resources has very often large historical and symbolic meanings.

“Disputes are very politically sensitive when they affect local communities and their connection to the land. The land is very often tied to a sense of identity, community and nationhood.”

What is important during mediation is to observe closely how differentlevels of society, from a local to higher levels, interact with each other.

“Typically mediation on one level can often be combined with other peacebuilding tools like dialogue and consultations at other levels. You can often have strategies on different levels that complement each other”, Brown said.

Gender dynamics also play a role in resource conflicts. As an example of a water-based conflict Brown mentioned Tajikistan and Kyrgyzstan.

“Women groups were one of the primary water users in the area. They’re the ones who were the decision-makers about a lot that was going on. Working with women is incredibly important and they are the actors to deal with in certain resource conflicts.”

The one-day training consisted of a morning introductory session by Professor Brown, going through the recently published UNEP report and an afternoon session about cases in different areas like Iran and Afghanistan, Nigeria, Guatemala and Libya.