In late 2014, almost 30 mediators and conflict resolution practitioners from West Africa and the wider continent were brought together for a comprehensive conflict analysis and mediation course in Ghana. This intensive 9 day training, which is closely adapted to the West African context, aims to increase the skills of regional actors to peacefully resolve local conflicts. 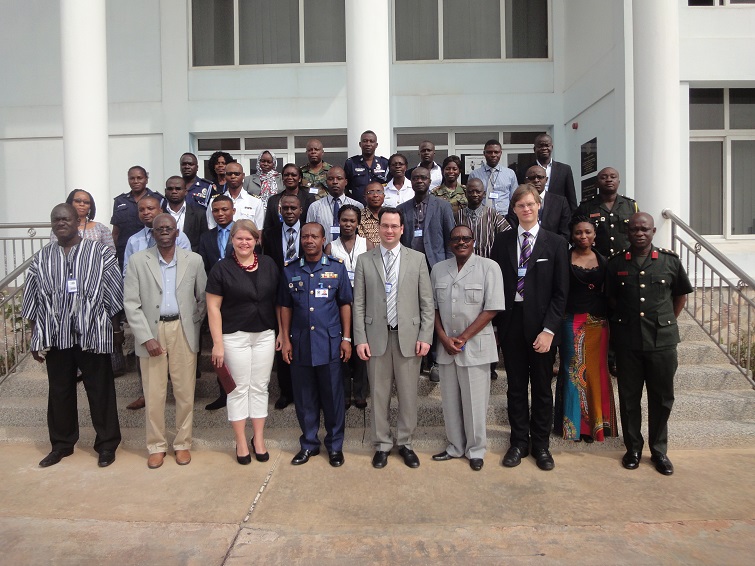 “Peacemaking is like counseling, it helps people to help themselves”, said Rev. Emmanuel Asante, Chairperson of the Ghana Peace Council, who spoke at a panel discussion during the training held between 24 November and 4 December. However, he stressed that if the culture of the people is neglected in the peace efforts, they may not succeed. To avoid this pitfall, the training developed by CMI and the Kofi Annan International Peacekeeping Training Centre (KAIPTC) is closely based on culturally sensitive and locally relevant teachings.

All the way from the basics to practical mediation simulations

The course was designed to strengthen participants’ analytical and conflict analysis skills related to mediation. It also improves their negotiation skills and capacities to develop locally relevant and tailor-made conflict resolution approaches. A key component throughout the course is the sharing of experiences and lessons learned among the participants.

The course consists of nine different modules which guide the participants through increasingly in-depth knowledge and tools. The course ends in a practical simulation session where the participants deal with a concrete scenario as conflict parties and mediation teams. During this course, the scenario was based on the 2007-2008 post-electoral crisis in Kenya.

The overall course modules were:

The course targets primarily mid-level West Africans who currently work in mediation or conflict resolution, or those who are likely to do so in the future, specifically aiming at mediation support team type of practitioners. Participant selection is also based on criteria such as gender balance, regional spread, academic profile and the likelihood they have of using the course knowledge and skills in the near future. Due to various reasons (including the ongoing Ebola crisis) the participation in the 2014 course was also opened to professionals from the wider continent.

In West Africa, there is a growing need to regularly use mediation to resolve conflicts at different levels of society. However, the current capacities of mediators and their support teams are widely considered as limited. CMI’s and KAIPTC’s course was developed in response to this identified capacity gap in the region.

The course was designed to address conflict analysis and other key aspects of effective mediation. The course design and development also carefully considered the need to make the course culturally and contextually appropriate. The course was piloted in June 2013, and finalised after an in-depth revision.