Experts discussed in Moscow the threats and challenges to European Security 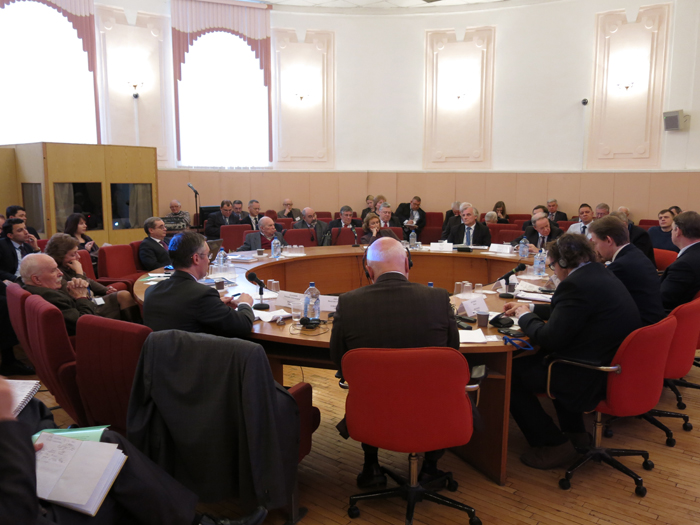 On December 5, CMI, the Institute of Europe of RAS (Russian Academy of Science) and the AES (Russian Association of European Studies) organized in Moscow a joint conference entitled “In Search of Joint Responses to Threats and Challenges to European Security”. After the welcoming remarks from the organizers – Dr. Aleksey Gromyko, Director of Institute of Europe (RAS) and President of AES, Dr. Ville Brummer, Programme Director, CMI and Dr. Dmitry Danilov, Head of the Department of European Security, Institute of Europe and Vice President of AES – speakers from Moscow, Ukraine, the EU and NATO presented their views on the current challenges for European security in the context of Ukrainian crisis. Vasily Likhachev, Member of the State Duma Committee on CIS Affairs, Eurasian Integration and Relations with Compatriots, Vitaly Zhurkin, Academician of RAS, Honorary Director of the Institute of Europe RAS, Moscow, Dmitry Balakin, Head of NATO Section, Department of European Cooperation, Ministry of Foreign Affairs of the Russian Federation, Sven-Olov Carlsson, Deputy Head of Delegation of the European Union to Russia, Robert Pszczel, Director of NATO Information Office in Moscow, Irina Kobrinskaya, Deputy Director of Centre for Situation Analysis of RAS and Erwan Fouéré, former Special Representative for Transdniestrian Settlement of the Irish Chairpersonship of the OSCE (2012) and Andrey Ermolaev, Director, Institute for Strategic Research “New Ukraine”, Kiev, were the speakers at the first session.

The second session was dedicated to the impact of the Ukrainian crisis on regional security and frozen conflicts. Speakers from the Republic of Moldova and Transdniestria, Armenia, Azerbaijan, Russia and the USA discussed regional conflicts through the prism of recent developments related to Ukraine: what are the consequences and implications for other conflicts in the region, and how does this situation change the role of the peace processes and actors within them.  Sergey Kulik, Director of International Development, “Institute of Contemporary Development” Fund, Moscow, Fariz Ismailzade, Vice Rector for External, Government and Student Affairs, Baku, Karen Bekaryan, Chairman of NGO “European Integration”, Yerevan, Sergey Shirokov, Director of the “Mediator” Bureau for Political Studies, Tiraspol, Vasile Sova, former Chief Negotiator of the Republic of Moldova in the Transdniestrian settlement process, William Hill, Professor of National Security Strategy at the National War College in Washington DC and Andrey Zagorsky, Head of the Department for Disarmament and Conflict Resolution, IMEMO RAS, Moscow, were the speakers at the second session.

Both sessions were followed by lively discussions with the participants of the conference, who represented a wide range of academics, experts and officials from Russia, representatives from EU member states and members of CMI’s High level expert dialogue group on Transdniestrian settlement.

CMI’s contribution to the round table event was funded by the German Federal Foreign Office through project Zivik of the Institute for Foreign Relations (ifa) and by the Ministry for Foreign Affairs of Finland.