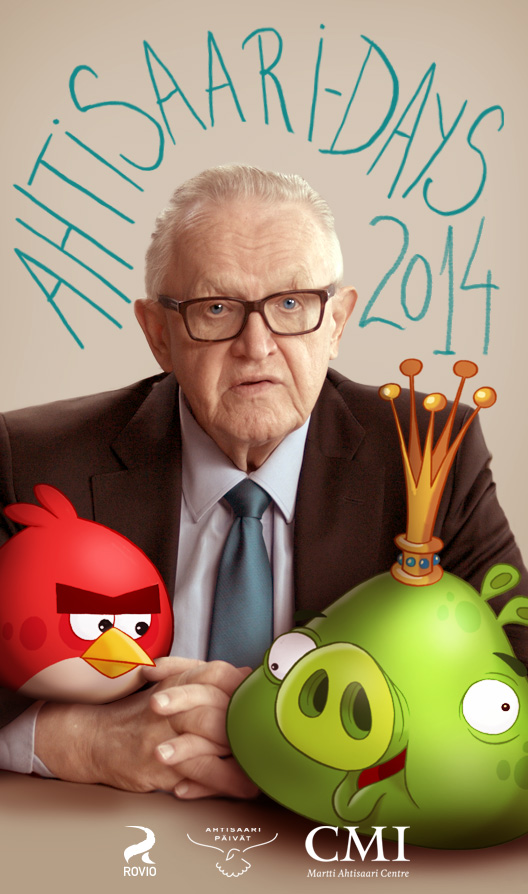 CMI and Rovio Entertainment take a stance on peace

Finland — November 10, 2014 — After almost five years of on-going conflict between the birds and the pigs, Rovio and CMI are pleased to announce that Nobel Peace Prize Laureate Martti Ahtisaari has managed the impossible: a truce in the epic and ongoing conflict between birds and pigs in the Angry Birds world. Check out the peace negotiation video!

During Ahtisaari Days, held in Finland, November 11 to 13, King Pig and Red will put aside their differences and commit to peace, in what will be both an important milestone for the Angry Birds universe and an engaging way to spread knowledge of an important issue.

“It is my eternal optimism that all conflicts can be solved” says President Ahtisaari. “What are we trying to achieve? Human rights, decent healthcare, truth, reconciliation and a fair eggaliterian society”, he adds.

“1.5 billion people, every fifth person on the planet, are being robbed of freedom and basic human rights because of conflict”, said Blanca Juti, Chief Marketing Officer of Rovio. “We wanted to support CMI, the conflict resolution organisation founded by President Ahtisaari, by bringing awareness to the importance of conflict resolution and peace mediation. Angry Birds world offered the perfect way to do this and we are delighted to be part of the Ahtisaari Days.”

“At CMI, we constantly work on new and innovative ways to solve violent conflicts around the world,” said Elina Lehtinen, Head of Communications and Fundraising at CMI. “Our continued peaceful future lies in the hands of the next generation. Teaming up with Rovio allowed us to share our important peace message in an innovative way to audiences of all ages.”

Ahtisaari Days, which first started in Finland in 2011, is held yearly in November. The aim of the Days is to make peace work and mediation part of everyone’s daily life at all levels of society by treating the themes in Finnish schools and by raising discussion at public events. This year CMI is partnering with Rovio to jointly bring awareness about conflict resolution and peacebuilding to the next generation.

About Rovio Entertainment  Ltd.
Rovio Entertainment Ltd, the creator of Angry Birds™, is a global industry-changing entertainment media company headquartered in Finland that creatively combines digital with physical, breaking the boundaries of traditional content delivery. What started as a casual game in 2009 became an international phenomenon within a few months of its release. Today Angry Birds is not only the most downloaded game of all time, it is a worldwide known entertainment brand reaching out into publishing, licensing, animations, books and location based entertainment. Rovio’s animated Angry Birds feature film is slated for July, 2016. www.rovio.com

About Crisis Management Initiative
CMI is one of the world’s leading independent conflict resolution organisations. There are no quick fixes to the complex, mostly internal conflicts that are ravaging the world today. We believe that all conflicts can be resolved. CMI works to build a more peaceful world by preventing and resolving violent conflicts in crisis areas. As an impartial non-governmental actor, we can work in all phases of a peace process and at all levels of society. Founded in 2000 by President and Nobel Peace Prize Laureate Martti Ahtisaari, we have over 15 long-term projects in the most difficult and violent areas in the world, such as South Sudan and Ukraine. http://www.cmi.fi/en/