CMI works to ensure that women are heard

Half of the world’s population are women. Yet less than 10% of peace negotiators have been women in the last decade. Antonia Potter Prentice calls women the world’s largest marginalised majority. “In peace processes the challenge is to find options for resolving the conflict. How many ideas are left unfound because women are not there to raise them?” 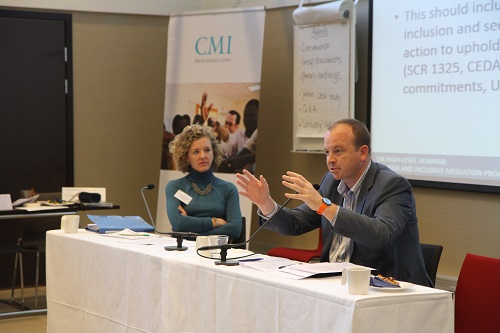 Research indicates that peace is most sustainable when it has been built in an inclusive way with all of society. Despite numerous global commitments and public debates, practical results remain few. Led by Antonia, CMI works to support a stronger role for women and recognition of gender issues in peace processes.

“We don’t believe that women hold the single key to sustainable peace, but they must have their place alongside men in overcoming the challenges violent conflicts pose to the societies we build together,” she says.

CMI’s gender and inclusion work is done on two fronts. Firstly, the aim is to build understanding and skills in gender-sensitive mediation among leading peace envoys. Secondly, CMI actively supports women’s participation in official peace processes in various countries, including South Sudan, Yemen and the Caucasus. Influential and credible women from different walks of life are assisted to develop and deliver concrete ideas, strategies and demands to decision-makers and those that influence them.

Antonia, who joined CMI in autumn 2013, has extensive experience in humanitarian and peacebuilding issues. Years of living in Cambodia, Timor-Leste, Afghanistan and Indonesia kindled her passion for women’s empowerment. “Over and over again I saw women as victims or being cast as victims, never in a power position. Then coming home to the United Kingdom you see that it’s still the case also there. It’s just so profoundly wrong.”

Her role at CMI is multi-faceted: to participate in designing and implementing the work, but also to act as an ambassador both internally and globally. “I hope that through a smart approach we can increase women’s participation in our projects in a concrete, meaningful way, not just because it has to be done. Perhaps also encourage broader change by sharing our experiences and approaches with others.”

Dreaming of a truly inclusive process

CMI’s work has been well received both among the international community and in the target countries. But Antonia is quick to point out the complicated realities on the ground. A case in point is Yemen, where women’s participation in the recent national dialogue was a historic 30%, but they still face many challenges to participating in public life.

“It would be foolish to claim that we’ve made a difference in the lives of Yemeni women in the space of a year. But we have managed to stick our toes in a couple of important doors and may over time see some results.”

Still Antonia feels that CMI’s staff should be proud of the women’s forum, which was set up well before gender issues came to the organisation’s strategic forefront. “Actually, two men on our staff came up with the plan. That makes me happy,” she laughs.

This interview was originally published in CMI’s Annual report 2013-2014. Take a look at the other interesting interviews in the report.