On some mornings, Stephen Heintz says he wakes up wondering why he is still an optimist. As the President of the Rockefeller Brothers Fund, a New York based foundation that advances social change around the world, Heintz is uniquely positioned to understand what he calls profound global challenges. The systems that were put in place in the previous century are “no longer up to the challenges that we face in the 21st century,” he states. 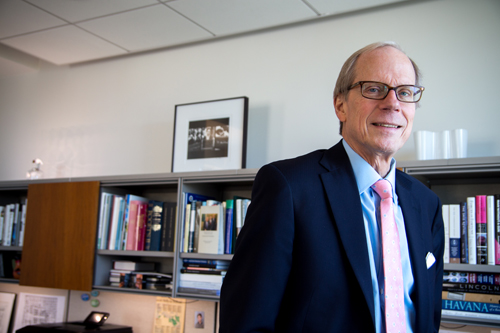 Heintz believes that in the changing landscape of how power is distributed across societies, using 21st century solutions for positive change is necessary.  “We haven’t figured out how to do that yet very well, but I think CMI is part of the vanguard of helping to figure that out,” Heintz says.

“I have come to appreciate that formal peacemaking processes are often far too disconnected from the realities that people experience on the ground in conflict areas,” Heintz explains. It is in bridging this disconnect that he sees a place for CMI. Connecting peacebuilding and the human security concerns of conflict-affected communities to formal processes of diplomacy and negotiation is, for Heintz, “the distinct contribution that CMI makes in the field of international relations.”

The Rockefeller Brothers Fund supports CMI’s work through its peacebuilding program. He continues to closely follow the organisation’s work, especially in the Middle East. “There I’ve just been really impressed with how CMI is able to bring together people who otherwise wouldn’t be talking to each other,” Heintz says. According to him, CMI’s work in allowing them to transform their relations is part of a larger process of transforming states.

Despite the many contemporary global challenges, Mr Heintz believes in the possibility of a more peaceful world. “We have to work as if world peace is possible because, if we don’t, it will never happen,” he says. “CMI is a small, strategic, highly effective organisation that is part of the fabric of a process striving for that dream,” he concludes.

Stephen Heintz was interviewed and photographed by Saila Huusko for CMI’s Annual Report 2013/2014.