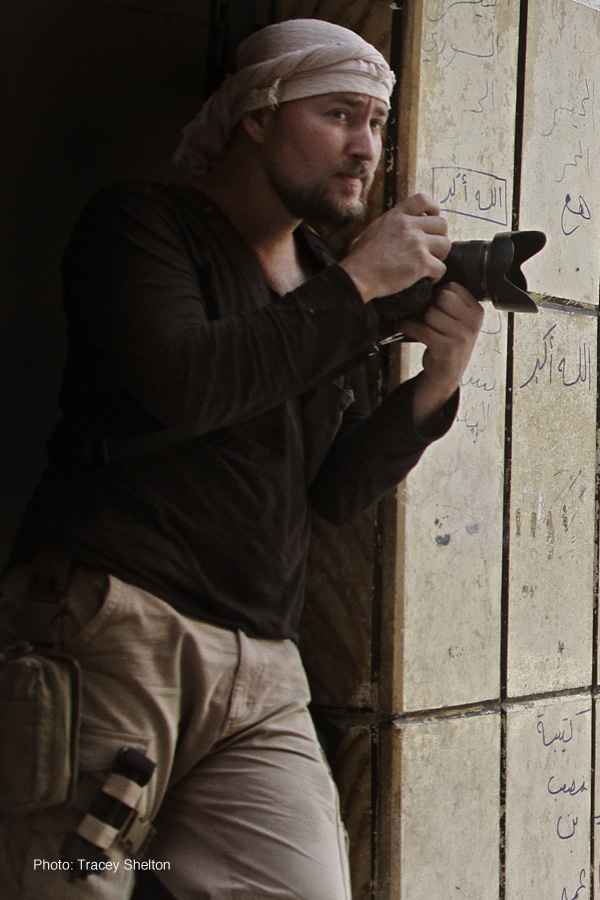 Rumbling noises and explosions. Photographer Niklas Meltio wakes up in the city of Aleppo in northern Syria.

A bomb has exploded right next to the hospital where he has crashed for the night. Many people lose their lives. Also those two hopeful families who arrived the day before from the front line seeking shelter are buried in the ruins.

“War is ugly,” Meltio, 35, says calmly. This award-winning Finnish photojournalist has covered crisis areas since 2006. Finns have had the opportunity to see his touching and often shocking images from conflict zones in Afghanistan, Libya and Syria.

“Wars are often sugar-coated in the Finnish media. It gives a false message to the readers. Wars have to be portrayed authentically, although many seem to think it doesn’t really go with your morning coffee.”

Making a difference by causing reactions

Brought up in Helsinki, Meltio began taking pictures as a young boy. An activist at heart, he quickly realised that photojournalism was the best way for him to make a difference. “I want to open people’s eyes, cause reactions and create the possibility for change.”

Meltio thinks it is important to tell the stories of people in the conflict areas. “Otherwise they are ignored and forgotten,” he says fiercely.

While his naïve aspirations have matured along the way, Meltio still believes that his work has an important impact in the long run.

“One photo doesn’t change a thing. But when professionals work together and the stories are shared with large audiences, it can foster a new generation of influencers who demand change.”

Meltio has extensively covered the Syrian uprising. It is one of the most severe crises in this century during which over 120.000 people have already lost their lives. Meltio and other journalists on the ground saw how the country spiralled into chaos while the international community remained helpless to stop the cruelty.

“Every time I returned to Syria, the hospital I had visited was lower as the grenades had destroyed the floors one by one. During my last trip, only a pile of stones was left.”

The Syrian crisis shows how the lack of willingness to negotiate has led to immense human suffering. Meltio calls for global responsibility. “There needs to be sufficient will for conflicts to be resolved. If we blindly pursue our own agenda with no interest in dialogue, we’re in deep trouble.”

Meltio wraps up the interview to catch his plane to Ukraine. Time for yet another photo journey.

As the crisis in Syria is one of the most severe humanitarian catastrophes of this century and Niklas Meltio has worked there extensively during 2011-2013, we chose to portray his award-winning images from the conflict on the cover of our annual report this year.

“The 19-year old girl trained herself to be a fighter because she wanted to defend herself from being raped,” Meltio describes one of the startling photos on the cover. The boy carrying the mattresses is seeking shelter as his neighbourhood is under a grenade attack. The elderly woman managed to escape to Kurdistan while the man with the child is escaping Syria through the desert. “I remember when I met the man with the tears in his eyes in a small village. He was devastated because his farm had been attacked and all his livestock killed,” he says. “Each photo tells a different story in a particular time and situation,” Meltio explains. “I want to show what war really looks like in people’s everyday lives, so that we would all do our best to put an end to it.”