CMI’s newsletter 1/2014: Spotlight on CMI’s presence in the United States 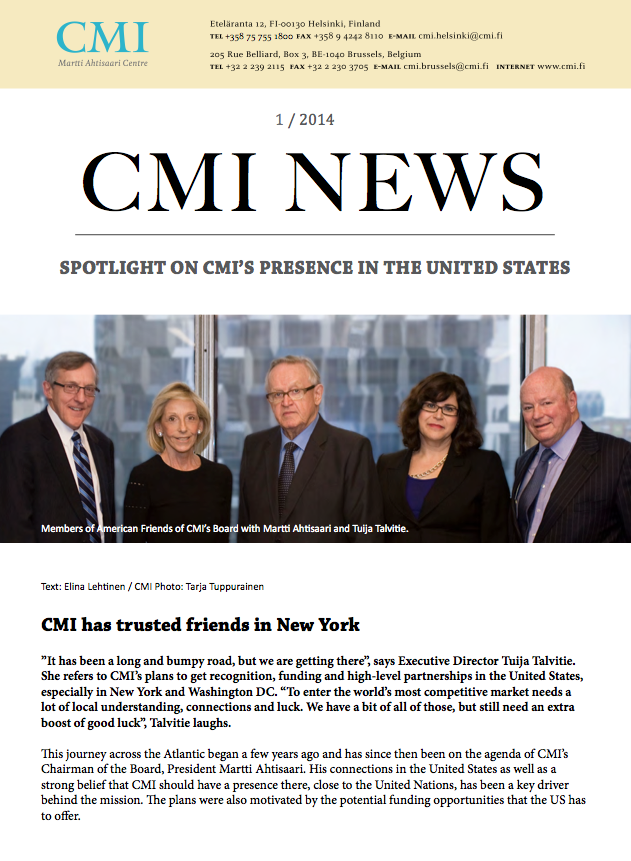 CMI’s presence in the United States

”It has been a long and bumpy road, but we are getting there”, says Executive Director Tuija Talvitie. She refers to CMI’s plans to get recognition, funding and high-level partnerships in the United States, especially in New York and Washington DC. “To enter the world’s most competitive market needs a lot of local understanding, connections and luck. We have a bit of all of those, but still need an extra boost of good luck”, Talvitie laughs.

“CMI has found a way to work in many of the most troubling conflict situations around the world”, Kate Almquist Knopf explains when asked about why she wanted to join CMI. “I’m particularly impressed with CMI’s anticipation of a number of hot spots that have suddenly become much hotter, for instance in South Sudan, where our current work will only become more critical.”

CMI has since 2007 been supporting the Liberian government in re-establishing its birth registration system. With the help of mobile phones, births can today be registered remotely in all counties of the country, even in the rural areas. These concrete achievements led CMI to conclude its direct activities at the end of 2013, but work still continues within the country.

No one exists without registration

As CMI’s birth registration project in Liberia ends, we took the opportunity to talk to one of the central persons coordinating the process, Esther G. Thomas, to find out her views about what has been achieved. “Registration gives people an identity. The feeling of being a part of something, having a nationality, unites people,” she says with conviction when asked how the project has supported peace in her country.