CMI’s project supporting youth in South Sudan has been very active in its work at the end of 2013. CMI and ONAD held three youth dialogue workshops in July, September and November resulting in the youth finalising their joint messages on key issues, which were presented to the government.

At the workshop in July, the youth core group began discussing the topic of national identity, prioritised their key issues related to insecurity, and reported on the successes and challenges in the peacebuilding mini-projects that they have implemented in their home communities to learn from each other.

The youth also discussed the constitutional review process with the Chairman of National Constitutional Review Commission, John Natana, and brainstormed on how they could contribute to it. They also discussed the topics of insecurity and national identity with other government representatives, including Inspector General Gen. Piang Deng Kuol and Mr. James Enock Monday from South Sudan National Police Service;, Mr. Charles Manyang D’Awol , Undersecretary from the Ministry for Foreign Affairs; and Mr. Peter Babtist, Undersecretary from the Ministry of Culture, Youth and Sports.

Several different media representatives attended the workshop opening session and a number of youth were interviewed about the project for the Radio Miryah, Eyeradio, Citizen TV and South Sudan TV. 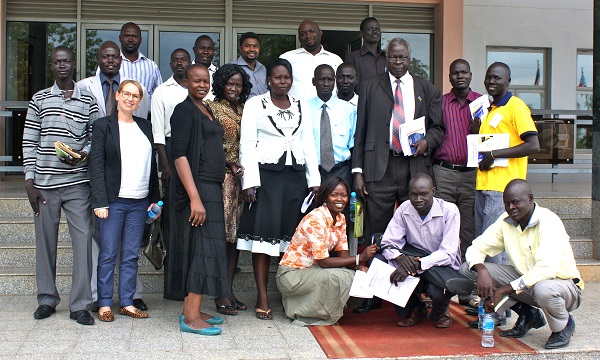 In September, the youth finalised their joint message on insecurity, continued their discussion on national identity and formulated draft message on it, received training on media skills and jointly planned the final workshop and advocacy event to be held in November. 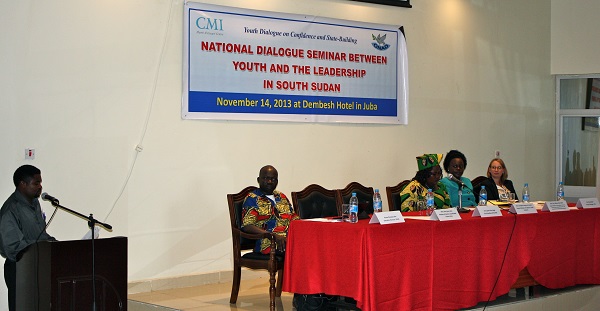 In November, the youth core group finalised their joint messages on insecurity, national identity and food security. These were shared with key government representatives at two key events. The youth first presented their issues and proposed solutions to the leadership of South Sudan, and then to the Chairmen of four key committees of the National Legislative Assembly in Juba: the Peace and Reconciliation Committee, the Defense and Security Committee, the Land and Natural Resources Committee as well as the Human Rights Committee.  At the end of the year, the youth also assessed the successes and challenges of the overall project in plenary, as well as individually in written format and in video interviews.

In the coming weeks the aim is for the youth to present their issues to the leadership of the National Constitutional Review Commission together with other South Sudanese youth organisations as soon as the situation in the country calms down.